Blowing the house down: life on the frontline of extreme weather in the Gambia 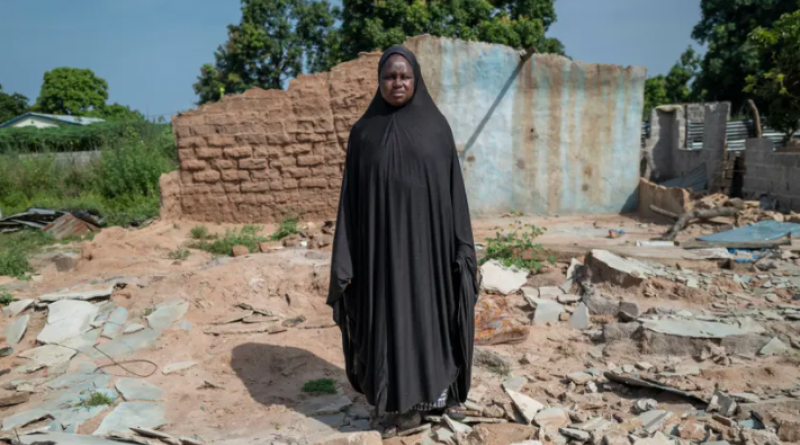 A storm took the roof off Binta Bah’s house before torrential rain destroyed her family’s belongings, as poverty combines with the climate crisis to wreak havoc on Africa’s smallest mainland country

Global development is supported by

The windstorm arrived in Jalambang late in the evening, when Binta Bah and her family were enjoying the evening cool outside. “But when we first heard the wind, the kids started to run and go in the house,” she says.

First they went in one room but the roof – a sheet of corrugated iron fixed only by a timbere pole – flew off. They ran into another but the roof soon went there too.

As torrential rain followed the wind, the family huddled together in the ruins of their home: they didn’t have anywhere else to go. “Everything was destroyed: our materials, our goods,” says Bah. “We had to just sit in the rain.”

The windstorm and flash flooding that hit parts of the Gambia that night in July killed at least 10 people, injured dozens and affected thousands. In one of the worst natural disasters for some years in the west African country, many lost their homes, and some, like Bah in the south-west town of Jalambang, are still without shelter.

“I am 50 years old and since I was born I have never seen such winds. Now every time there is the rainy season there are heavy floods,” she says, standing in the ruins of her home, a goat scampering around what used to be her bedroom, the remains of the roof lying discarded on the ground.

Around the world, the climate crisis is hitting the poorest hardest, and Bah is no exception: poverty made her more vulnerable to extreme weather and less able to recover from it.

Had her home been made of something more robust than mud and corrugated iron, it would probably have withstood the windstorm.

Had the soil not been depleted of minerals by torrential rains and deforestation, the tomatoes from which she once made a meagre income would probably still be growing.

Had the Gambia, one of the world’s “least developed countries”, been able to provide a proper social safety net for those struggling, Bah and her children would probably not still be destitute, more than four months after the storm, reliant on World Food Programme (WFP) rice and cash.

However, Bah had none of theseprotective layers and now she lies awake at night, worrying about what she is going to do. “I don’t know where it’s going to end,” she says.

She is not the only one worrying, says Muhammed Ceesay, at the youth-led NGO Activista. “Since the July windstorm and flooding, the government hasn’t taken any concrete action to make sure that next year the same thing won’t happen again.”

“Resilience building is not there,” he says; action is almost always “remedial rather than proactive”, responding to disasters when they happen but not taking steps to mitigate their impact.

It is election season in the Gambia, and, as Ceesay sits in a cafe at the side of a busy road, minibuses packed with political activists speed by, horns blaring and flags waving. But the climate crisis is conspicuous by its absence from the campaigns, says Ceesay. Whoever wins the presidency in early December “will have to deal with it but they’ll be caught by surprise because they don’t have a plan,” he says.

But Lamin B Dibba, minister for the environment and climate change, would dispute that: he says the country is taking steps to embrace renewable energy, particularly solar, and is setting up a new climate fund to help resilience projects. He too would prefer less emergency firefighting and more emphasis on adaptation and mitigation. The July windstorm was a disaster that “should not have happened,” he says, but did because of the poorly built houses in which so many Gambians, like Bah, live.

“The ultimate solution is to rely on science and technology, to have innovation and enhanced resilience and build the capacities of these vulnerable communities,” he says. To do that, though, the government says it needs climate finance from wealthier countries – and lots of it. At the Cop26 summit in Glasgow, leaders failed once again to pledge enough to hit a $100bn (£75bn) target.

If things don’t improve – if concerted action is not taken by politicians in the Gambia and internationally – many fear disastrous results. “That would really make the nation very vulnerable, fragile. This is the consequence no one wants,” says Yasuhiro Tsumura, country director at WFP, which is supporting the Gambian government to develop a robust social safety net.

Tsumura has already witnessed how climatic pressures have exacerbated the vulnerabilities of two other West African countries, Mali and Burkina Faso, both societies now living with chronic insecurity and violence.

The comparison is limited for several reasons. But it serves as a warning of the strain the climate crisis can place on an already fragile society.

NGOs say some Gambian communities are already experiencing low-level tension over resources. Farmers are seeing their crops fail; fishers their hauls depleted; and landing sites are under threat from the encroaching sea.

Lamin Komma, head of the national environment agency’s coastal and marine environment programme, says one possible result will be a rise in the number of people leaving. “If the status quo remains as it is there will be climate refugees.”

According to Kemo Fatty, a climate activist and part of the Gambia’s Cop26 delegation, there is no need for the future tense. His brother “took the backway” – as migration to Europe is known in the country – some time ago to find a better life abroad. His family, all farmers, has suffered a big drop in harvests in recent years.

“I don’t think that these people are migrants; I think they are climate refugees, because my brother’s argument was solid,” says Fatty. “At the end of the day, if we are not producing our land, where do you expect the people to go?”

Bah, though, has no desire to go anywhere else: all her children were born in Jalambang and she wants to stay, even though she has no idea what the future holds. “If I said I have someone to support me,” she says, “I would be lying.”

If she is able to rebuild her house, she plans to do it on the same spot but to tilt the structure in a different direction, to shield it from the wind.

Quite how she will afford it is unclear. Government aid of about £300 was enough to buy hundreds of concrete bricks, placed in neat rows beside the ruins, but not enough, she says, to finish the job.

Up the road, Mamadou Jallow, 37, is in a similar position: months after the storm, his home, though partly standing, is uninhabitable, its roof semi-collapsed. “It’s very painful,” he says, tutting in disapproval at the undergrowth that has shot up since July. “There was no grass here before. It was very clean.”

Leaning over his bicycle handlebars, dressed in a Celtic football shirt, Jallow speaks emotionally of the night the storm hit, thanking God for saving his wife and six children. “This year is the first time I’ve ever witnessed such strong winds and floods – where you see the roof coming off as you are inside the house,” he says.

Despite concerns that the same thing could happen next year, his priority is to move back in, no matter what.

“My biggest concern and hope is to be able to come back with my family,” he says. “Whether that’s in a house made of cement or mud, it doesn’t matter as long as I can come back.”

Floods, sewage and crocodiles: the crisis of the Gambia’s sinking city