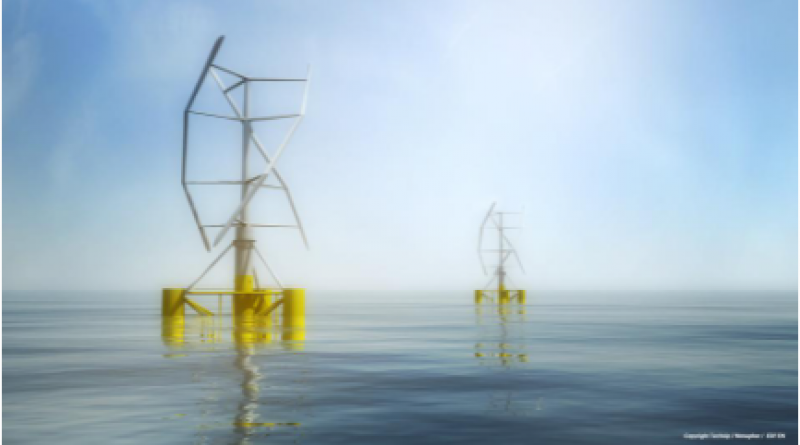 What makes renewable energy so exciting is the immense economic potential of groundbreaking technology advancements.

The main issue with conventional HAWT windfarms – which can number 60 to 70 turbines over 1500 acres – is that efficiency degrades rapidly in the back rows due to turbulence from the first rows of the formation. Vertical axis turbines solve this issue by generating less turbulence, and in some cases even improving the efficiency of nearby turbines.

The basis of their research is in computational flow analysis using 11,500 hours of computer simulations to optimize placement. They also analyzed the effects of downstream generated turbulence which reduces the back-row efficiency of traditional HAWTs to 25-30%.

This finding demands further study of condensed wind farms since the current turbine designs are meant to be used in a singular application. When installed in close proximity to one another, the performance characteristics change, reducing the efficiency of surrounding turbines due to turbulence created down wind. The typical offshore turbine from GE is massive, measuring 220 m across and 248 m high, and producing 12-14 MW of power on average – or enough to power up to 12,600 homes.

Current U.S. turbine capacity for wind totals at 118 GW or 8.4% of utility scale energy production. The offshore wind capacity is a measly 42 MW led by the first off shore wind farm at Block Island, RI, which accounts for 30 MW – 1 GW is 1,000 MW. In addition to the recently announced Vineyard Wind Project providing 800 MW, Danish company Orsted has been developing two Ocean Wind projects to provide a total of 2.3 GW to the state of New Jersey.

Initial applications of wind turbine technology began in the 1970s with a focus on remote small-scale applications, such as research stations that are disconnected from the power grid. The largest hurdle in the progression of VAWT designs is the lack of a proper airfoil shape and troubles with the braking systems, which drive unit costs up. Traditional aerospace applications have provided years of research and technical basis for the creation of the commonly seen “pinwheel” design. The onshore wind turbine market is dominated by an industry standard three-rotor HAWT design, but there is no standard design for VAWTs. Recent investments in offshore wind farms, like the Vineyard Wind Project, use a typical three-rotor HAWT design offered by market leader GE in a bedrock-based application not suited for deep water.

Given the violent and unpredictable conditions of deep ocean water, not to mention the weight and balance of a wind turbine, it is understandable that the technology required to mount a floating turbine was only created recently. A proposed solution was devised by Sandia National Laboratory, in partnership with the Department of Energy and universities around the nation. After conducting Phase One research under a grant of $4.1 million over 5 years, this solution provided insights which included a reduction in Levelized Cost of Energy (LCOE) through the application of a VAWT design.

Much of Sandia Labs’ initial work was in creating simulations of offshore wind projects. Further developments have included improving the design of airfoils and mechanical generators, as well as perfecting the methods to secure a turbine for safe operation in deep water conditions. The project research concluded in 2014, and was followed by a Department of Energy publication in 2017 establishing the official design recommendations.

Current VAWT market solutions are all geared towards microgrid and extreme weather applications. They possess an inherent benefit in that they are able to perform well in stressful weather environments; turbines are able to function even in typhoon weather, which can be a a lifesaver for deep ocean water infrastructure such as oil wells.

Nations including the United Kingdom and Germany are already at the forefront for production capacity and investment in offshore wind. The British Isles are home to the first GE-made 12 MW (MegaWatt) offshore unit, the same design being used in the Vineyard Wind project.

British interests reside in coastal sea applications, where conditions are easily managed by the HAWT design offered by GE.  The U.S. project is the Block Island wind farm three miles off the coast of Rhode Island, which produces 30 MW from a series of units provided by GE, enough to power 27,000 homes. Few nations currently use deep-sea wind energy, as it can cost twice as much as the coastal alternative on an LCOE basis.

Offshore wind has found a niche application for providing offshore power. One of the most demanding clients for offshore energy is the oil industry, which currently powers platforms with diesel electric generators. The typical offshore oil well consumes 20-30 cubic meters (5200-8000 gallons) per day. This specific application allows a high LCOE – like offshore wind – to be considered competitive.

Recent investments by Norwegian energy provider Equinor in the North Sea focus on powering their oil platforms with offshore wind. The proposed Hywind Tampen project includes 11 floating HAWTs producing 88 MW, meeting upwards of 35% of energy demand for a series of five offshore platforms. The Hywind project is expected to cut 200,000 tons of CO2 emissions per year. Further investment in offshore wind technology could eliminate the need for diesel fuel altogether.

In the United States, there have been small-scale projects to test the designs of floating HAWTs. In 2013, a scale model was installed off the coast of Maine by the DeepCwind Consortium, working in partnership with the University of Maine. The Seattle-based Principle Power has installed their patented Windfloat design off the U.S. west coast in a deep sea application. Principle Power currently has five units in operation and has proven their design’s ability to withstand up to 17 m (55’ 9”) waves and 41 m/s (92 mph) winds.

If the United States chooses to invest further in the development of floating VAWT turbine technology, it could become the global leader in deep sea wind. Once it overcomes the technical barriers created by materials and mechanical systems, the production capacity of a deep-sea wind farm is infinitely scalable when the correct technology is utilized. Models such as those created by the Oxford Brookes University team give credence to the idea of replacing floating oil platforms with wind turbines. The ultimate irony would be oil giants applying their deep-sea technologies to develop the first line of scalable floating turbines for deep sea applications.

With Assistance From Sean Moroney