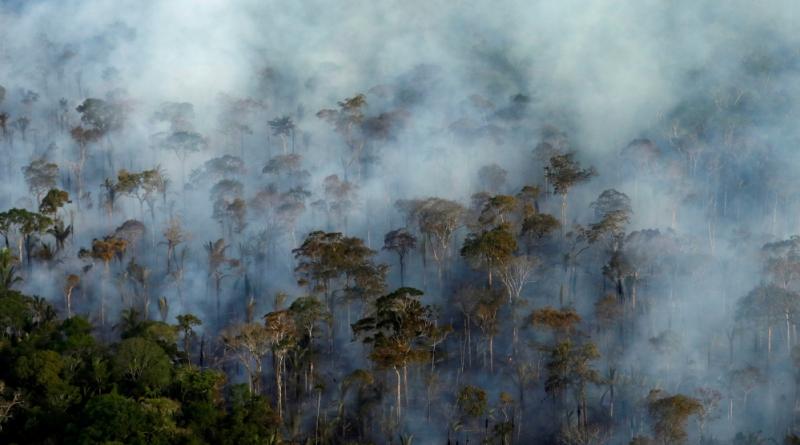 HUMAITA, Brazil (Reuters) - Fires in the Brazilian Amazon have surged so far in August, government data on Friday showed, outstripping the same period of 2019 and renewing concerns about the destruction of the world’s largest rainforest, which is a critical bulwark against climate change.

Brazilian space research agency INPE recorded 5,860 fires in the Amazon in the first six days of August, a 7% increase from the same period of last year. The data set is small and daily variation can be considerable, but the trend suggests this month may be on par with a year ago - the worst August in nine years.

Reuters witnesses driving on Thursday night along the BR-319 highway from Porto Velho, Rondonia, towards Humaita, in the state of Amazonas, spotted small fires crackling along the side of the road, with smoke hanging heavy over the asphalt.

Some of the areas burned last year were now being used for cattle raising. Fire is commonly used across the Amazon to clear land for pasture.

Environmental advocates blame right-wing President Jair Bolsonaro’s vision of economic development in the Amazon for emboldening illegal loggers, miners and land speculators to destroy the forest. Bolsonaro says more mining and farming are needed in the region to lift people out of poverty.

Following global pressure from foreign governments and investors, Bolsonaro has deployed the military to combat deforestation and fires. In July, deforestation in Brazil’s Amazon fell from a year earlier for the first time in 15 months.

Criminals often extract valuable wood from protected parts of the jungle before setting fire to the land, increasing its value for farming and ranching. Natural fires are very rare in a healthy rainforest.

'Everything is burning': Argentina's delta fires rage out of control