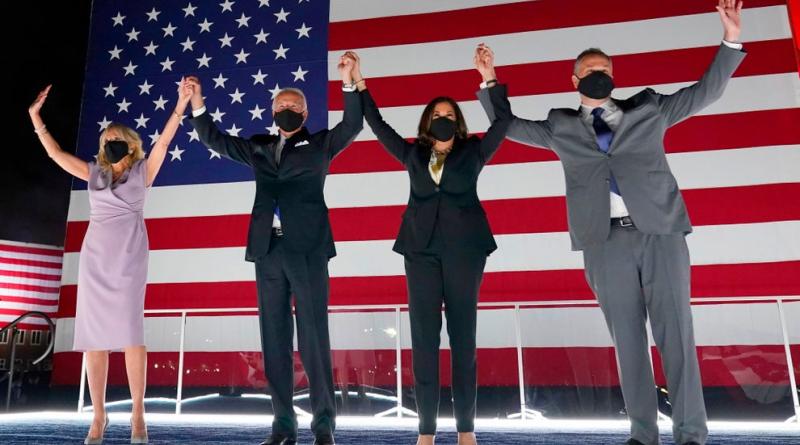 Leaders from across the world have used their first messages to president-elect Joe Biden to draw attention towards the climate crisis.

The prime ministers of the UK, Canada and Australia are among those to explicitly mention climate while congratulating Mr Biden on his victory in the US election.

“Congratulations to Joe Biden on his election as President of the US and to Kamala Harris on her historic achievement. The US is our most important ally and I look forward to working closely together on our shared priorities, from climate change to trade and security.”

Meanwhile, Canada’s prime minister Justin Trudeau said that he would work with Mr Biden and vice president-elect Kamala Harris to “work to advance peace and inclusion, economic prosperity, and climate action around the world”. 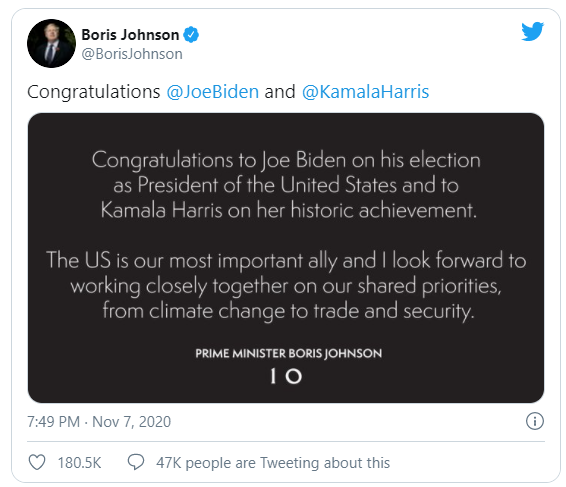 Others to mention climate in their first messages to Mr Biden and Ms Harris include the leaders of Fiji, Sweden, New Zealand, Austria, Iceland, the Maldives and Greece.

In a tweet congratulating Mr Biden, the president of Fiji Frank Bainimarama said: “Together, we have a planet to save from a #ClimateEmergency”

Others to include climate in their message of congratulations include Ursula von der Leyen, the president of the European Commission, Charles Michel, the president of the EU council, and Fatih Birol, the executive director of the International Energy Agency, an intergovernmental organisation that plays a major role in shaping global energy policy.

In her first message to Mr Biden, the Greek president Katerina Sakellaropoulou said that rejoining the Paris Agreement would be a “first step” towards “cooperation and friendship” between the US and Greece.

The US formally left the Paris Agreement, a major international treaty aimed at boosting climate action, on 4 November. This was after President Donald Trump announced his intention to withdraw from the deal in June 2017.

However, Mr Biden has pledged that he would rejoin the agreement. One day after the US officially left the deal, he tweeted: 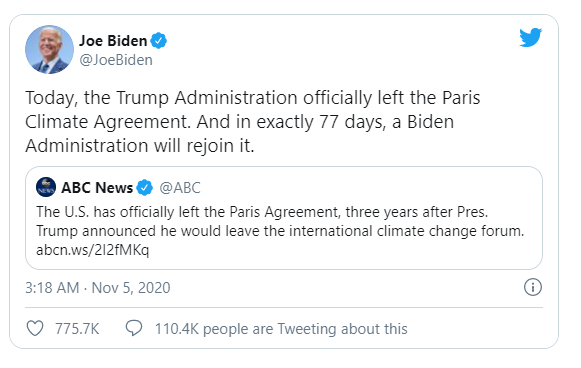 Rejoining the Paris Agreement will be key for the US to reassert its authority on the global climate stage after four years of inaction, Brendan Guy, manager of international policy at the Natural Resources Defense Council, told The Independent.

“As the second largest greenhouse gas emitter after China, the US must play a positive global role to avoid the worst impacts of climate change,” he said.

“The US sets an important example, either positively or negatively, for the international community’s transition toward a low-carbon economy. And the US can be a constructive force in rallying stronger national climate ambition through the Paris Agreement, as well as ensuring the transparency of countries’ actions.”

In addition to rejoining the Paris Agreement, Mr Biden has also pledged to bring in a package of measures that would represent the most ambitious climate plan of any US president to date.

A key part of this plan is a pledge for the US to reach net-zero emissions by 2050. If the target were enacted, it would mean more than three-fifths of global carbon emissions will be under net-zero targets.

However, Mr Biden may struggle to implement his most ambitious domestic climate measures if the Democrats do not take control of the Senate.

“We all know that there will be challenges in getting ambitious domestic measures through Congress, particularly because it looks like the Democrats haven’t taken the Senate,” Pete Betts, the former lead climate negotiator for the UK and EU told The Independent on Thursday.

“But there’s still lots of potential for the US administration to take action, in the context of a stimulus bill but also executive action.”

“It’s clear that Biden won in part because of climate voters. He got significant donations from the climate community and young people turned out in unprecedented numbers to vote for him. He has a strong mandate to govern on this issue, and given how much the campaign focused on climate, I know he will prioritise it.”