What would a Biden victory mean for the climate crisis? 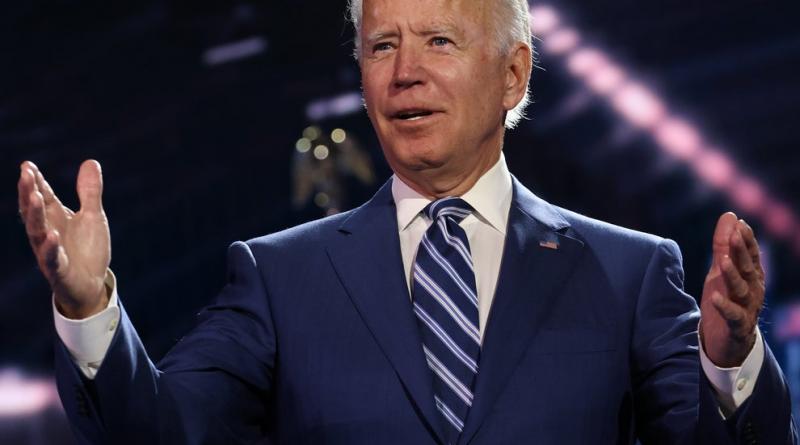 Senior figures from across the world’s major economies have come together to condemn the US after it made its official exit from the Paris Agreement, a major international treaty aimed at delivering action on the climate crisis, on 4 November.

A joint statement from the UK, Italy, France, Chile and the UN said it noted “with regret” that the US had formally exited from the agreement, adding that the “science is clear that we must urgently scale up action and work together to reduce the impacts of global warming”.

Meanwhile, a statement from Japan’s top government spokesman Katsunobu Kato described the US’s exit as “extremely regrettable”. “The climate change issue isn’t something of a single country, it should be addressed by the entire international community,” he told reporters today.

However, this morning, the path to victory in the US election is becoming clearer for Joe Biden. If elected, Mr Biden has pledged to rejoin the Paris Agreement, in addition to bringing about a package of measures that would represent the most ambitious climate plan of any US president to date. 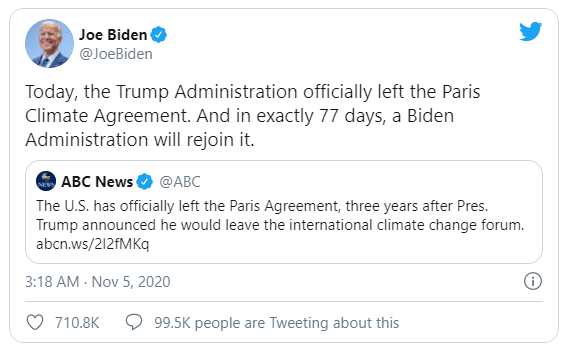 A rejoining of the Paris Agreement under a possible Biden administration would send “a very significant signal” to the rest of world, Pete Betts, the former lead climate negotiator for the UK and EU and current fellow of Chatham House, told The Independent.

“If, as it looks like, it’s Biden, then clearly there will be a boost to momentum on tackling climate change over the next year in particular, but also the next four years,” he said.

“First of all, you’ve got the world’s biggest economy and second biggest emitter, who were previously out of the game, needing to put forward an ambitious [climate plan].

“The second thing is we’ll have the diplomatic weight adding major heft to raise ambition from other countries.”

A key element of Mr Biden’s climate plan is a commitment for the US to achieve net-zero emissions by 2050.

If Mr Biden is elected, it would mean more than three-fifths of global carbon emissions will be under net-zero targets. 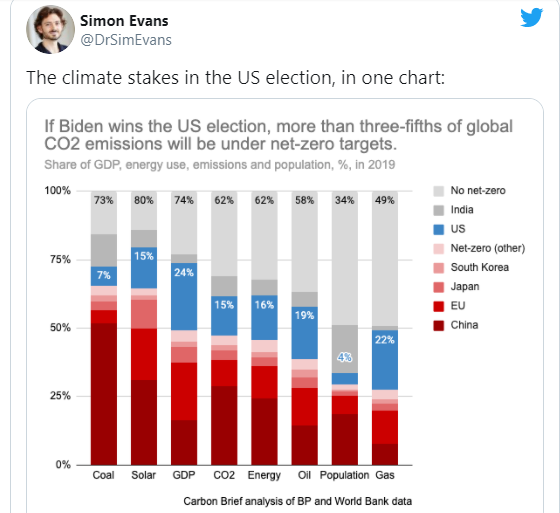 It would also mean that the US would follow in the footsteps of other major economies, including Japan, the EU and the UK, which have all already made pledges to reach net-zero emissions by 2050.

China, the world’s largest emitter, shocked the world in October when it too announced intentions to reach “carbon neutrality” by 2060. (It is still unclear whether China’s pledge covers all greenhouse gas emissions or only carbon emissions.)

A Biden victory would also see greater diplomatic cooperation on climate between the US and the UK, which is due to host a major UN climate summit, Cop26, in Glasgow in 2021, Mr Betts told The Independent.

“I do think Americans, the Europeans and the UK – as Cop26 president, will put pressure on allies like Japan, Australia and Canada to raise their game,” he said.

Speaking on Peston on Wednesday, the UK transport secretary Grant Shapps said there could be clear areas for future collaboration on climate between the UK and the US.

“I keep hearing people say: ‘Well you must prefer it to be one side or the other.’ But as I pointed out there are all sorts of interests which will go one way or the other,” Shapps said.

“I mentioned climate change, which is something this government has been absolutely keen to ensure that we’re progressing with things like becoming the first economy in the world to legislate for net zero by 2050, and one can imagine that one of those candidates would be more enthusiastic as president than the other.”

However, it is not yet clear if Mr Biden would be able to enact all of his ambitious domestic climate proposals if elected if the Democrats do not take the Senate, says Mr Betts:

“We all know that there will be challenges in getting ambitious domestic measures through Congress, particularly because it looks like the Democrats haven’t taken the Senate. But there’s still lots of potential for the US administration to take action, in the context of a stimulus bill but also executive action.”