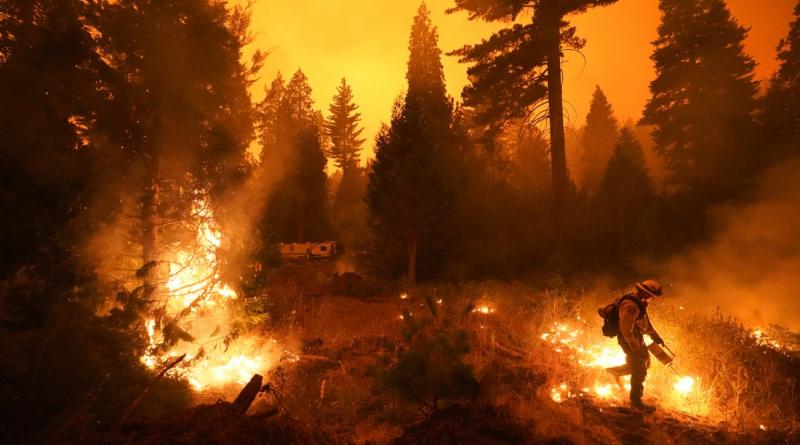 This year’s historic blazes and apocalyptic skies will become routine. Hope lies in rethinking how we live with fire.

California’s historic wildfires have served up astonishing scenes of destruction that have claimed several dozen lives, incinerated huge tracts of land and caused dystopian orange skies to loom over a populace choked by toxic smoke. But, in time, the sort of destruction and anguish suffered in 2020 may seem routine, even mild.

The record scale of the flames, which have consumed an area larger than the state of Connecticut, is bringing scientists’ expectations of the climate crisis into reality. Rather than merely entering a new but stable era, the US west is on a moving escalator to further extremes. “In 20 years from now, the current circumstances will feel more normal,” said Waleed Abdalati, former chief scientist of Nasa. “It’s not that we are all screwed, but it’s too late to put a stop to it. We can slow it, but we can’t stop it now.”

Fire is a natural feature of the American west – millions of acres used to burn each year and some trees require it in order to propagate – but conditions are becoming unmoored from modern lived experience. The number of days of extreme wildfire weather has doubled in California since the 1980s, with the retreat of dousing autumnal rains and snowfall expanding the traditional fire season into a year-round battle. “The trees are like a bunch of matches out there, ready to go,” said Mike Eliason, a veteran Santa Barbara firefighter. Crews from Israel to Australia have arrived to support exhausted local firefighters.

“These fires have been unbelievable but also numbing because you’re kicked in the head by one fire and then have another one,” Eliason said. “Every year we tell people this was the worst year, which then gets beaten by the next year and then by the next. It’s disheartening and demoralizing.”

A century of suppressing low-level fires has stocked forests with plenty of vegetation that sits in bone-dry soil, baked in rising heat. California is getting hotter, by an average of 3F (1.6C) over the past century, and this summer it has roasted. California’s Death Valley recorded perhaps the hottest temperature ever captured globally - 130F (54.4C) - in August, a few weeks before Los Angeles County set its own all-time record of 121F (49C). “We’re in the midst of a climate emergency,” said Gavin Newsom, the state’s governor, who has clashed with Donald Trump over the president’s denial of climate science. “I’m exhausted that we have to continue to debate this issue.”

It will get worse as the planet heats up further; the only question is the degree. Scientists predict the area scorched by wildfire will increase by 77% by the end of the century, with the number of extreme fire daysjumping 20% in just the next 15 years – a scenario that raises profound questions over the way life is conducted in the US west in an evolving era of megafire.

The crushing expense of major citiesacross California has caused a housing crisis that has collided with the state’s wildfire problem. People seeking an affordable, or more bucolic and spacious, life have moved a rash of newly built houses carved into the scrublands and pine forests of what’s known as the wildland-urban interface. As a result, it is estimated that one in four Californians now live in a high-risk fire zone.

While there are some localized rules around clearing potentially flammable vegetation from near dwellings, there are no universally applied building codes to make houses more fire resistant, nor any state plan to steer development away from fire-prone areas. Insurers, facing mounting losses, have started to retreat, although California has imposed a temporary ban on cancelling insurance for about 800,000 homes situated in riskier parts of the state.

As a result, homes continue to be built featuring classic wood shingle roofs and deckings that allow burning embers to leap from building to building. “People often have an idea of aesthetic beauty that makes things more risky,” said Paige Fischer, an environmental scientist at the University of Michigan.

Some towns have faced repeated losses to fire, leading to calls for construction to be discouraged in certain areas. “If you move to a fire-prone area, even if you don’t lose your home, you’ll spend days or weeks each summer under stress, suffering the health risks of smoke,” said Fischer. “Things have changed dramatically and the livability of fire-prone areas is coming into question.”

A more provocative option was summed up in a memorable chapter of the academic Mike Davis’s 1998 book Ecology of Fear, titled The Case for Letting Malibu Burn. Davis argues that the chaparral – thickets of shrubs and bushes – around the wealthy coastal enclave was always meant to periodically burn and preventing this cycle only worsens fires. His suggestion of effectively leaving Malibu to its own defence resonated in 2018, when the huge Woolsey fire swept through the region.

Ecologists have put forward a more tempered version of this, where the west learns to live with fire in a more strategic way. “We are going to have to coexist with wildfire and change the way we build and live,” said Max Moritz, a wildfire specialist at the University of California, Santa Barbara. “It’s not a land management issue, it’s a problem of where and how we build our communities.”

Research undertaken by Moritz, drawing from examples in Australia, suggests that communities could be better defended if houses are clustered together, with a buffer such as a golf course or orchard around them and a place of last refuge within the settlement. Effective evacuation routes and tougher building codes, to make homes more resilient to fire, would also lessen the risk to life. Much like the other great calamity that looms over California – earthquakes – wildfires could be managed via engineering, Moritz argues.

“We need to build smarter so fewer people die and fewer homes burn,” Moritz said. “This year hasn’t surprised me, it’s sad to say. We’ve seen several of these huge events and you get hardened to all the tragedy. The most upsetting thing is that we haven’t adapted.”

But the reach of fire, prodded on by the climate crisis, extends beyond constructed defences. The west coast has been subjected to some of the worst air quality in the world, with a haze of smoke causing beaches, parks and schools to shut. Ash has rained down upon cities across the state for several weeks. Doctors have already noted an uptick in hospital admissions from asthma and strokes likely triggered by the wildfire smoke, which is more toxic than most urban sources of pollution.

“Everyone in California has versions of the story that they never had to think about this smoke and now they do,” said Suzanne Paulson, an air pollution expert at the University of California, Los Angeles. The repeated plumes of smoke over the UCLA campus provide Paulson with air samples but they also deter her from riding her bicycle to work.

She also now regularly has “fire refugee” friends stay with her when they flee flare-ups in the Los Angeles hills. “I have one friend who has offered a retainer,” Paulson said. “We desperately need new housing but living in some of these wildlands is becoming untenable unless you start building houses out of cement.”

The current fires illustrate just the beginning of the threat to which the US west must adapt. What California’s former governor Jerry Brown calls the “new abnormal” bared its teeth in mid-August, when thousands of bolts of lightning exploded upon parched grasslands and forests that have been in the grip of a drought, the deepest in a millennium, for much of the past two decades, sparking hundreds of fires.

Within a few weeks, three of the four largest fires ever recorded in the state had roared across the landscape, ringing the Bay Area and blotting out the daytime sun for stunned residents. One, a confluence of fires called the August Complex, spans nearly 800,000 acres, twice the size of greater London. Within a few weeks more, smoke had unfurled as far as New York in the east and Hawaii in the west.

The fallout has been harrowing – whole towns melted away to piles of ash and twisted metal, the birds in the trees silenced, thousands of evacuees huddled in tents in parking lots. The fires have been so fierce, advancing by as much as 25 miles a day, that they have created their own weather systems. Giant clouds of ash and smoke have billowed 10 miles high, beyond the standard altitude of a commercial airliner, as fire tornados tear up the trees below.

The crisis is playing across different states and ecosystems. In Oregon, more than 500,000 people – a tenth of the population – have faced orders to flee. “Apocalyptic is about the right word,” said Doug Franzke, a pastor who was covered in falling ash as fire crackled around the town of Molalla. “The Bible talks of the Earth being desolate and it was about that.”

California and Oregon will increasingly have to wrestle the trade-offs between a lifestyle that remains idyllic for many people and the multiplying risks of fire. The need for those hard decisions is perhaps now clearer than ever – the front page headline of the Los Angeles Times screamed “California’s climate apocalypse” on Sunday.

Much like a pandemic, the problem won’t just vanish on its own. “California has nice weather and beautiful scenery but that is changing,” said Abdalati. “If you have frequent evacuations, have to stay indoors from the smoke and wear a mask because of the ash in the air, some of the appeal will likely be gone. There will be decisions made at an individual level over whether to stay or go.”