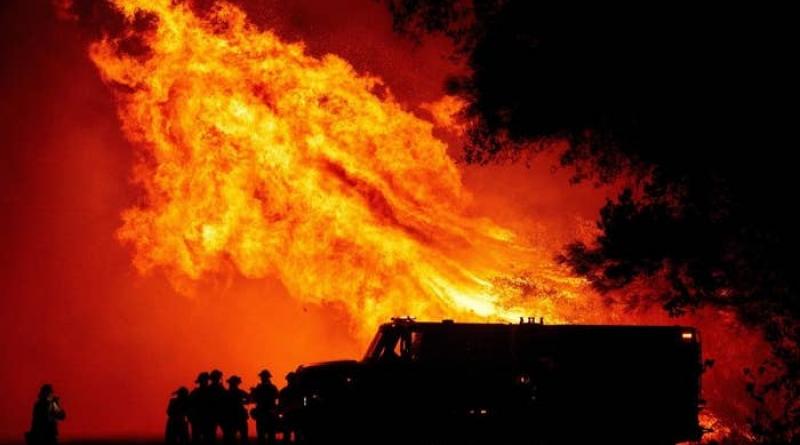 "We have not reached the peak. In fact, no one knows where the peak is,” one expert said.

Across large parts of California, daylight never arrived on Sept. 9. Caught under a vast sheet of smoke streaming from fires to the north, the San Francisco Bay Area woke to a sickly orange glow that only darkened as the morning progressed.

Just over the border in Oregon, thousands of people were evacuated from the city of Medford as the fast-growing Glendower fire surged up Interstate 5, burning through the towns of Phoenix and Talent to the southeast.

Oregon Gov. Kate Brown described the weather conditions that spawned her state’s fires as a “once-in-a-generation event.” Others have called it a “new normal” in the face of climate change.

But this isn’t simply a new normal, because it will likely get worse: Climate change is bound to pile on several more decades of warming and drying in the West, no matter what steps the world’s nations take to cut carbon emissions.

“This is very much a way station on the path to a new future,” Daniel Swain, a climate scientist at the University of California, Los Angeles, told BuzzFeed News. “We have not reached the peak. In fact, no one knows where the peak is.”

Swain and other experts are as alarmed as everybody else about what’s going on — but they’re not surprised.

“I admit to being a little freaked out right now,” Alexandra Syphard, chief scientist with Vertus Wildfire Insurance Services and an ecologist at San Diego State University, told BuzzFeed News. “But nothing so far has happened that couldn’t have been predicted.”

Swain added that the increased severity of the wildfire season also takes an emotional toll on the scientists paying the most attention. “This is horrible. It is very hard to process,” he said. “Personally, I’m exhausted by all of this.”

These experts had few words of comfort for anxious West Coasters who yearn for a return to normalcy in the months and years to come. “For some of the scientists, that dread is amplified even more because we know what’s coming,” Swain said.

Scientists also warned that there are no quick fixes to the West Coast’s fire woes. Reducing the inevitable damage from future big wildfires will require restrictions to curb the sprawl into wildlands that has been a defining feature of California’s real estate development in recent decades, strict building codes to ensure that at-risk homes are designed for fire safety, and efforts to reduce the number of fires ignited by people, power lines, and other infrastructure.

Given that it’s only going to get hotter and drier in the foreseeable future, it will also require efforts to make California’s forests less of a tinderbox. After decades of misguided attempts to suppress wildfires in the Sierra Nevada, the spine of mountains that runs down the east of the state, the forests are much denser than they would naturally be. What’s ultimately needed, experts say, is a return to historical conditions, when an even greater area burned each year — but with much less ferocity, leaving big trees to survive instead of blowing to the winds and falling as ash.

This will not be comfortable. Storied landscapes will change as some burned forests are replaced by more drought- and heat-tolerant scrubland. And West Coasters may have to get used to smoky skies as state and federal officials literally fight fire with fire via prescribed burns to try to reduce fuel for wildfires.

Widespread power cuts, as utilities shut down the grid to prevent their power lines from sparking fires during high winds, will also become a common experience. A study published last month from Swain and others estimated that Northern California will experience an average of 1.6 million person-days of annual power cuts in the years to come, based on historical climate conditions and utilities’ stated thresholds for when they will pull the plug.

So far, more than 3.1 million acres in California have burned in 2020, according to the state's Department of Forestry and Fire Protection, or Cal Fire. That has eclipsed the state’s previous record of more than 1.9 million acres, set in 2018 — and there are still at least a couple of months of the fire season still to go.

The total area burned this year isn’t the whole story. Indeed, nationally, this isn’t even a particularly severe fire season by that measure: According to the National Interagency Fire Center, just under 5.3 million acres had burned in 2020 by Sept. 10, below the 10-year average of 5.76 million acres for the year to date. That’s largely because it’s been a relatively quiet year for fires away from the coastal states.

What is more worrying is that so many large fires have erupted in such a short time in a relatively small area, including the south of Oregon, around the San Francisco Bay, and the Sierra Nevada mountains. The fires have burned within touching distance of major population centers, affecting millions of people with unbreathable air and a burnt orange sky.

The latest set of wildfires kicked off Aug. 17, when an unusual series of “dry lightning” storms swept across Northern California, igniting dozens of fires, some of which coalesced into three massive complexes that are now the first, third, and fourth largest fires in recorded state history.

“Up until the lightning siege, it was a rather unremarkable season,” John Abatzoglou, a climate scientist at the University of California, Merced, told BuzzFeed News.

Arizona reels as three of the biggest wildfires in its history ravage state.