As the election hangs in the balance, the US officially exits the Paris Climate Agreement. 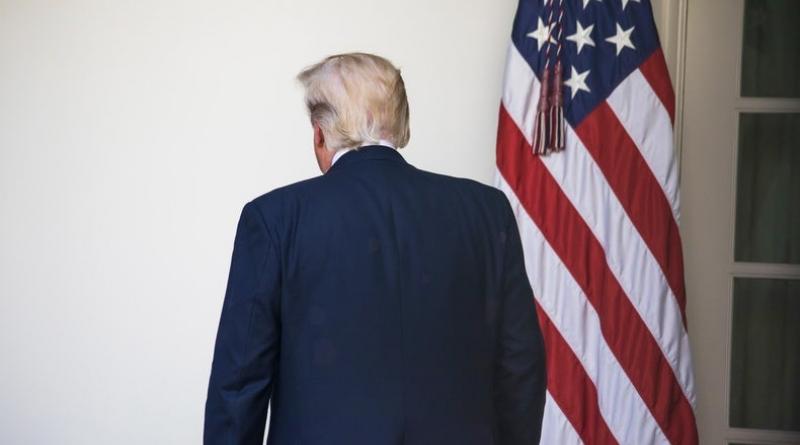 On 4 November, the US officially exits the 2015 Paris Climate Agreement.

As the US election hangs in the balance, the consequences of four years of President Trump continue to take effect.

Whatever the outcome, there is one immutable fact: on 4 November, the US officially exits the 2015 Paris Climate Agreement.

On this day last year, the Trump administration formally notified the United Nations that it would withdraw after the required one-year waiting period. (The agreement had built in a requirement that no country could pull out in the first three years. Mr Trump did so on the first day possible.)

The president announced his intention to withdraw in June 2017, saying it was an end to “the draconian financial and economic burdens the agreement imposes on our country.”

The US is the only country to withdraw from the global pact. It can still attend negotiations and give opinions, but is relegated to “observer status”.

The Paris Accord aims to avoid dangerous climate change by dramatically reducing the global greenhouse gas emissions which are heating the planet.

Countries set their own goals to try to curb global temperature rise, aiming to stay well below 2 degrees Celsius above preindustrial levels, and pursue efforts to limit heating to an increasingly ambitious 1.5C.

The consequences of the worsening climate crisis are happening all around us: wildfires, life-threatening heatwaves, rising sea levels and more extreme weather.

The US exit leaves a vacuum on the international stage that China has signalled that it is ready to step up to fill.

Calling for a “green revolution”, President Xi Jinping announced at the UN General Assembly earlier this year China’s pledge for carbon neutrality by 2060 and said the country would aim to have carbon emissions peak before the end of this decade.

US withdrawal also gives a pass to others inclined to do little to adapt from their reliance on fossil fuels, such as Brazil and Australia.

The decision to withdraw puts the US on the backfoot in addressing its climate concerns in a global forum. This year has seen unprecedented wildfires on the west coast, increasingly devastating hurricanes making landfall in the Gulf and flooding across the heartland.

The US accounts for 14 per cent of global carbon emissions in 2019, while China is responsible for almost double that at 26 per cent. (The EU is 9 per cent and India is 7 per cent of the global total), according to the Global Carbon Project.

The most recent National Climate Assessment, produced by the federal government, found that climate change “creates new risks and exacerbates existing vulnerabilities in communities across the United States, presenting growing challenges to human health and safety, quality of life, and the rate of economic growth”.

Mr Trump has repeatedly mischaracterised the terms of the  Paris agreement, which are voluntary. Last October, he called it a massive wealth transfer from America to other nations and dubbed it “one-sided”.

After Mr Trump’s withdrawal, a group of interdisciplinary scientists published a report looking at the implications of withdrawing and suggested that by the end of the century, the US could be about 5 per cent poorer with about $8trn in losses.

A report produced by the Organisation for Economic Co-operation and Development for the G20 also found that climate policy can boost growth and employment. The study indicated that G20 nations could see a 5 per cent increase in growth by mid-century with a strategies for carbon reduction and climate resilience.

“The US agreement is not a tax on the American people. There is no massive wealth transfer,” Climate Advisers CEO Nigel Purvis, who was a lead State Department climate negotiator in the Clinton and George W Bush administrations, told the AP.

“In fact, the agreement obligates no country to make any financial payments.”

In just the past few weeks, Japan and South Korea both committed to going carbon neutral by 2050, as more and more economies around the world move to adapt in the face of the climate crisis.

If Mr Biden becomes president, he has said he would immediately rejoin the Paris Agreement. He could take a leaf out of Obama’s book and sign an executive order, as the former president did in 2016.

But it would not necessarily be that straightforward.

The US may need to submit an immediate plan for reducing emissions - in UN lingo, an “NDC” - nationally determined contribution. President Obama previously pledged to reduced emissions by around 26 per cent between 2005 and 2025.

But Mr Biden has bold ambitions. His climate plan calls for the US achieving a 100 per cent clean energy economy and net-zero emissions no later than 2050. And he wants to bring the rest of the world along too with COP26, the UN climate talks taking place in Glasgow, Scotland in November 2021 after being delayed by the pandemic.

Mr Biden’s climate agenda would need the backing of Congress, which would likely require a Democratic majority in both the house and Senate, the latter hinging on Tuesday’s results.

As part of the Paris deal, Mr Obama pledged $3bn toward the Green Climate Fund to help poorer countries adapt. Trump moved to withhold $2bn when he became president.

In 2019, 27 countries announced contributions totalling $9.8bn. The US refused to contribute.

Mr Biden says he will “recommit” to the fund, suggesting that the US will make good on their pledge. Regardless, other countries could remain leery.

Jonathan Pershing, the State Department’s special envoy for climate change during the Obama administration told the New York Times that the country would likely be faced with lingering distrust on the international stage.

The US has pulled a similar move in the past when former president George W Bush took the US out of the 1997 Kyoto Protocol, after it had been joined by his predecessor Bill Clinton.