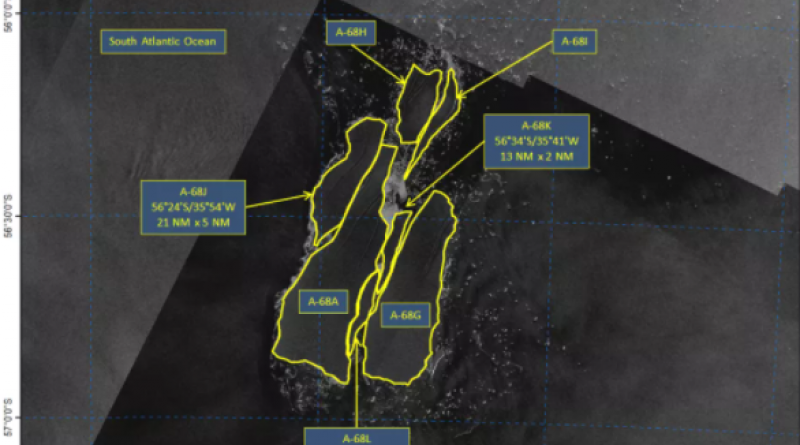 Iceberg A68a was once large enough to hold the five boroughs of New York five times over; now, it's shattering like a broken window.

The world's largest iceberg has shattered into a dozen pieces, the U.S. National Ice Center (USNIC) reported on Sunday (Jan. 31), bringing the colossal object a few leaps closer to its total destruction. Thousands of local penguins have breathed a sigh of relief.

The iceberg, named A-68a, broke off of northern Antarctica's Larsen C Ice Shelf on July 12, 2017, and has been steadily drifting north ever since. While the berg initially measured more than 2,300 square miles (6,000 square kilometers) in area — large enough to hold the five boroughs of New York City five times over — it is also extremely thin, and began losing large chunks of ice beginning in April 2020.

Last week, the gigantic raft of ice split down the middle while drifting through the relatively warm waters near the British overseas territory of South Georgia Island — and now, both sides of the berg are cracking apart at the seams.

According to the USNIC, a total of 13 total chunks have cracked off of iceberg A-68 now, with seven new ones appearing in the last few days. (Icebergs that break off of the same parent berg are named with sequential letters of the alphabet; the newest chunks are named A-68g, A-68h, A-68i, A-68j, A-68k, A-68l and A-68m).

While these recent crack-ups signal the iceberg's inevitable doom, they also bring good news for nearby South Georgia Island. In November 2020, scientists monitoring the iceberg's path feared that it would smash into the seafloor near South Georgia, potentially crushing some of the island's seal, penguin and whale residents, and cutting off foraging routes for the survivors.

In January, the iceberg followed currents around the island, removing the most immediate danger to wildlife. Now, with this most recent series of disintegrations, the threat of a collision looks even less likely, the BBC reported.

At this rate, there may be very little for British researchers to study during their planned mission to investigate the iceberg with underwater robots. The twin submersibles are currently scheduled to spend almost four months collecting data on seawater temperature, salinity and water clarity from opposite sides of the iceberg (or, whatever's left of it), Live Science previously reported.