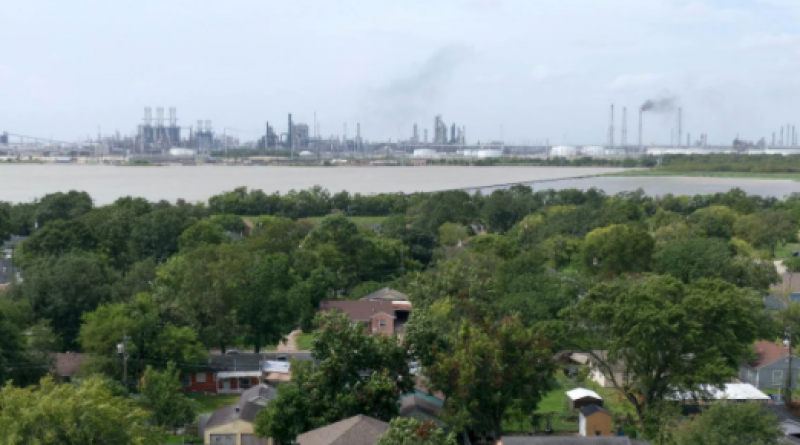 Texas oil refineries released hundreds of thousands of pounds of pollutants including benzene, carbon monoxide, hydrogen sulfide, and sulfur dioxide into the air as they scrambled to shut down during last week's deadly winter storm, Reuters reported Sunday.

Winter storm Uri, which killed dozens of people and cut off power to over four million Texans at its peak, also disrupted supplies needed to keep the state's refineries and petrochemical plants operating. As they shut down, refineries flared — or burned off — gases in order to prevent damage to their processing units.

According to the Texas Commission on Environment Quality, the five largest refiners emitted nearly 337,000 pounds of pollutants in this manner.

ExxonMobil's Baytown Olefins plant in Baytown released 68,000 tons of carbon monoxide and nearly a ton of benzene in what it called a "safe utilization of the flare system."

Critics noted, however, that benzene is harmful to bone marrow, red blood cells, and the immune system.

"There is no safe amount of benzene for human exposure," Sharon Wilson, a researcher at the advocacy group Earthworks, told Reuters. 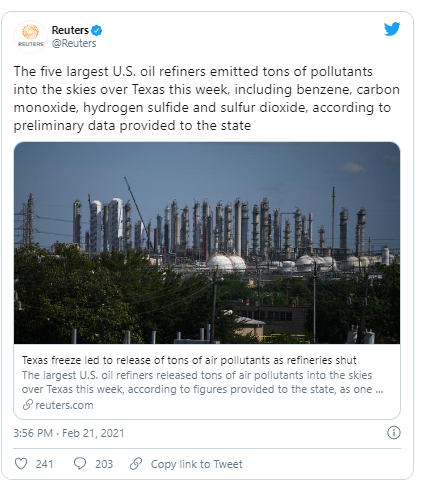 Motiva's Port Arthur refinery released 118,100 pounds of pollutants into the air between Feb. 15 and Feb. 18. This was triple the amount of excess emissions the plant reported to the U.S. Environmental Protection Agency for the entire year of 2019.

Hilton Kelly, who lives in Port Arthur, told Reuters that there were "six or seven flares going at one time."

Wilson said that the flaring "could have been prevented" by winterizing the refineries.

"We need someone in the Texas legislature to file a bill requiring the oil and gas industry to thoroughly winterize all their equipment," Wilson told Earther. "The bill probably won't pass in Texas, but that will create some more scrutiny about it." 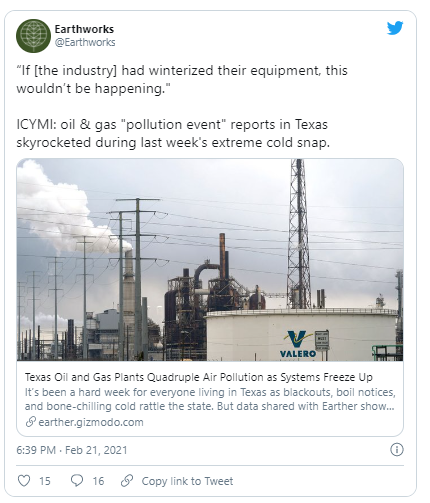 Earther reports that between Feb. 11 and Feb. 18, there were 174 so-called "emissions events" from fossil fuel facilities in Texas, compared to between 37 and 46 such events in weeks before the storm.

In addition to the previously mentioned pollutants, chemicals released from Texas facilities include over 6,500 pounds of the carcinogen isoprene from a Shell plant in Deer Park near Houston, as well as an indeterminate amount of methane, which is 84 times more harmful to the atmosphere than carbon dioxide over the short term.

Wilson told Earther that "in Texas we don't count methane" in pollution reports.

The release of large amounts of dangerous pollutants during Uri stands in stark contrast with claims by Texas Gov. Greg Abbott that alternative energy sources such as solar and wind are responsible for Uri's deadly power outages and that the Green New Deal would be a "deadly deal" for the United States.