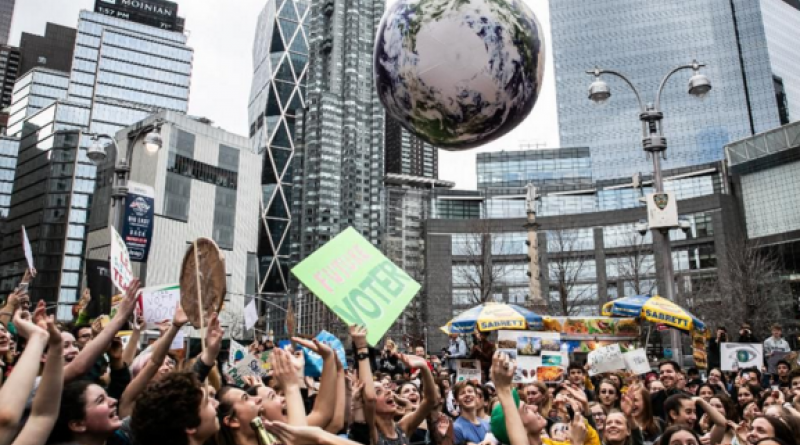 Something strange is going on with the climate – not just in terms of the increased amount of extreme weather events such as heatwaves in the Arctic, Polar vortexes over New York and massive floods from the Midwest to Mozambique. Indeed, these are exactly the kind of thing that climate models predicted would happen.

What’s strange is that people are starting to take notice. It’s hard to ignore when schoolchildren across the world strike for the climate, a movement inspired by Swedish schoolgirl Greta Thunberg, who started the movement (inadvertently, I think) when she started her own climate strike in September last year.

This week, the centre of London has been brought to a standstill by the environmental action group Extinction Rebellion and the reaction, even from the UK government, has mostly been – “well, they do have a point”.

Meanwhile in the US, in the last month alone, New Mexico, Washington and Puerto Rico committed to 100% clean or renewable energy and Maryland committed to 50% renewable electricity, joining host of other states and cities from Oregon to Maine, including the twin titans of the US economy California and New York, which has also just announced a plan to cut emissions from buildings by 40% within a decade.

Now, even central bankers are getting in on the act. The Network for Greening the Financial Services (NGFS), representing 18 central banks, including Germany, France, Mexico, Japan, Australia and China (although notably, but predictably, not the Federal Reserve), has just published a report pointing out that “climate change will affect the global economy and so the financial system that supports it. The financial risks it presents are in consequence system-wide and potentially irreversible if not addressed”.

These risks are hard to deal with because they are long-term in nature but require action in the short term to reduce their impact. A recent Bank of England survey showed that just a tenth of banks are taking a sufficiently long-term view of climate risks, with the average planning horizon being just four years.

The Governor of the Bank of England, Mark Carney, the Governor of Banque de France François Villeroy de Galhau and Frank Elderson, Chair of the NGFS, have published an open letter, warning that “climate change is a global problem, which requires global solutions, in which the whole financial sector has a crucial role to play” .

The catastrophic effects of climate change are already visible around the world, the central bankers warn. “From blistering heatwaves in North America to typhoons in south-east Asia and droughts in Africa and Australia, no country or community is immune. These events damage infrastructure and private property, negatively affect health, decrease productivity and destroy wealth. And they are extremely costly: insured losses have risen five-fold in the past three decades. The enormous human and financial costs of climate change are having a devastating effect on our collective wellbeing.”

The impact of climate change has compelled governments to act, imposing their own targets to bring about “a collective transition to a low-carbon economy” to limit temperature rises to as close to 1.5C as possible. “But this transition brings its own risks, they add. “Carbon emissions have to decline by 45% from 2010 levels over the next decade in order to reach net zero by 2050. This requires a massive reallocation of capital. If some companies and industries fail to adjust to this new world, they will fail to exist.”

The NGFS has called on policymakers and the financial sector to take action to make the transition to a low-carbon economy easier.

For these recommendations to be successful, the market and policymakers must work together to ensure “robust and internationally consistent disclosure” of the most important information for climate-related financial disclosures.

The NGFS is also encouraging regulators to develop an adequate classification system to identify which economic activities contribute to the transition to a green and low-carbon economy. “This will be particularly valuable in supporting financial actors to make sustainable investment and lending decisions,” it says.

It also means, and this is perhaps a lesson that President Trump and other world leaders could take on board, that acting to tackle climate change is politically easier and more popular than it has ever been.