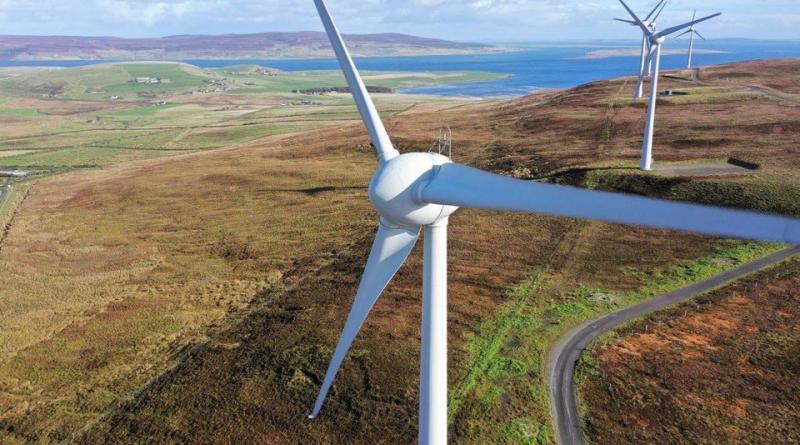 Once leaving Britain’s highest carbon footprint with their total reliance on fossil-fuel-generated power from the mainland, Orcadians took matters into their own hands about 20 years ago.

This move was assisted by Community Energy Scotland, a registered charity that works in partnership with community groups to help them adopt green energy while reducing their power bills.

With community-owned turbines that harness the 20 inhabited islands’ gale force winds, supplemented by solar, wave and tidal power, the Islanders started producing more energy than they could use.

This resulted in the curtailment of their wind turbines. In response, the islanders tried several solutions to redirect excess energy. For instance, the Heat Smart Orkney Project diverts energy to heat homes, while the ‘Surf ‘n’ Turf’ initiative uses excess energy to fuel car and passenger ferries with hydrogen-power.

But some generators still have their turbines curtailed up to 50% of the time, according to Killian O’Connor, chief operating officer from Solo Energy.

These initiatives also don’t address the intermittency problem – how to become completely independent from fossil fuels at times when demand is high and energy supplies are low.

The launch of ReFLEX, announced this month by the European Marine Energy Centre, marks a move towards totally decarbonizing Orkney’s energy supply.

The project – “a test bed for the energy of the future”, according to energy and clean growth minister, Claire Perry – is a collaboration between Solo Energy, Aquatera, Community Energy Scotland, Herot-Watt University, Orkney Islands Council, and multi-national energy company Doosan Babcock.

Rather than continually upgrading grids with bigger substations and bigger power lines to cope with peaks of demand or generation, the project is instead modeling flexibility, explains Solo Energy CEO and Orkney resident Mark Hamilton.

“You can build all the wind farms and solar farms that you want. But unless you have the means to balance the intermittency of that renewable generation, you’re never going to be able to fully switch off dependency on fossil fuels to fill the gaps when renewables aren’t generating.”

“We install the assets at no upfront cost, and then we will cover the cost of those assets over time through trading the flexibility that we’re creating,” Hamilton explains.

Among other technologies, up to 1,000 batteries and 600 electric vehicles with V2G (vehicle-to-grid) capacity will be installed.

O’Connor says, “This will allow renewable generators to increase their annual outputs due to reduced curtailment levels and, in some extreme cases, double the capacity they would be allowed to sell back to the grid.”

During peaks of renewable energy generation, the system stores excess energy in distributed battery systems and electric vehicles – “batteries on wheels”. During peaks of consumer demand, the locally stored energy is released.

This is all intelligently controlled. And there is no shortage of complexity when it comes to flexible virtual power plant technology, says Hamilton – particularly the market and trading side of things.

“It’s very important that the consumer is shielded from a lot of this stuff. Ultimately, for the consumer it’s about lowering energy bills and making them aware of the opportunity to decarbonize their energy supply.

“But it certainly needs a lot of different skill sets and new thinking.”

The partners involved in the ReFLEX project – many of whom are based in Orkney – embraced the opportunity to collaborate rather than compete, “and combine our skill sets and our knowledge across the energy sector to make this very new and disruptive model work,” says Hamilton.

There are ample opportunities to take advantage of the high volatility in wholesale electricity pricing and recover the cost of the assets provided up front to consumers over time. This volatility also enables the FlexiGrid to economize energy purchase for the virtual energy cloud and consumers.

According to Nicholas Gubbins, CEO of Community Energy Scotland, Orkney’s piloting of the flexible system will help the UK grid follow suit.

For communities further afield, Gubbins’ advice is to “get organized and up to speed on how this works, as it could create real opportunities to increase the value of your local renewable energy resources while addressing local energy needs and substituting renewable energy for fossil fuels.”

Partnerships are an essential part of the picture, he adds, declaring it’s “the way forward in the ‘smart energy’ world.”