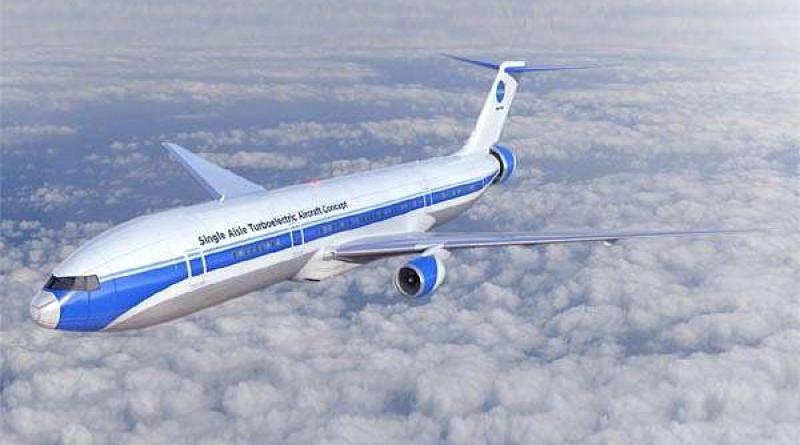 As our research team at NASA continues to explore electrified aircraft propulsion as a fuel- and- cost-efficient alternative to traditional jet engine-powered airplanes, the agency is teaming with U.S. industry to develop the innovative components and flight demonstrations required to make this electric evolution possible.

"We're at a critical time in the history of aviation because we have an opportunity to develop systems that will reduce cost, energy consumption and noise, while opening up new markets and opportunities for American companies," said Jim Heidmann, manager of NASA's Advanced Air Transport Technology Project.

"It's imperative that we work with industry and academia to ensure the right technologies are available to meet demands of future passengers and carriers."

But to make electric commercial flight possible, NASA believes those aircraft must be able to produce and operate safely with at least a megawatt (MW) of power. That's a lot of power.

An electric single-aisle passenger aircraft like NASA's STARC-ABL concept would require 2.4 MW of power - enough to run 2,000 homes. Until now, the legacy electric technologies - generators, power conversion electronics, motors, etc. - required to produce that much power were far too large and heavy to fit in an aircraft or would offset any benefits of using electric propulsion.

So, we had to figure out how to make these components smaller and lighter, while retaining or improving their power output. To do this, we're using cutting-edge materials technologies designed for high temperature applications. And who better to call on than American industry to help advance this work?

Under this effort, NASA and GE recently announced a $12 million partnership that will accelerate the development of next-generation power inverters using silicon carbide (SiC) and design techniques to help overcome the size and weight challenges.

Inverters are critical to these propulsion systems because they convert electric power from alternating current (AC) used by engine-mounted generators and the electric motors driving propellers, to the high-voltage direct current (DC) power required for efficient power distribution on large commercial aircraft.

"With recent advances in materials and power electronics, we are beginning to overcome the challenges faced in developing energy-reducing electrification concepts, and this inverter work is a critical step in our electrified aircraft propulsion efforts," said Amy Jankovsky, manager of the Hybrid Gas-Electric Propulsion subproject at NASA's Glenn Research Center.

"Our partnership with GE is key to advancing flight-weight and flight-ready components in the megawatt class for future transport aircraft."

Silicon carbide is one of our best weapons in combating these challenges because its material properties - high operating temperatures, high voltage and power handling capacity - make it well suited for these high-power aviation applications.

These material advantages give engineers the ability to design lighter components at a much smaller scale, reducing systems that were as large as a refrigerator to the size of a microwave, while increasing the power output.

"We're essentially packing one megawatt of power into the size of a compact suitcase that will convert enough electric power to enable hybrid-electric propulsion architectures for commercial airplanes," said Konrad Weeber, chief engineer of Electric Power at GE Research. "We have successfully built and demonstrated inverters at ground level that meet the power, size and efficiency requirements of electric flight."

Our electrified aircraft propulsion researchers are building and testing electric systems in Glenn's NASA Electric Aircraft Testbed, or NEAT, at Plum Brook Station in Sandusky, Ohio. The first of its kind, NEAT recently conducted its first megawatt-scale test, taking advantage of the massive amounts of power available in the testbed. NEAT is key to the technology development being conducted by NASA and its various industry partners. This SiC inverter development partnership comes on the heels of another recently-initiated NASA-U.S. industry collaboration that teams the agency with GE, Boeing and United Technologies Corporation/Pratt and Whitney in studying the possible benefits and risks of future megawatt-scale electric flight demonstrations.

This flight research would demonstrate advanced electric aircraft propulsion components and systems, operating at a minimum of 1 MW, to prove these technologies meet our requirements in fuel burn and emissions.

"The flight demonstrations are an important part of technology development because they offer our engineers and industry partners the opportunity to work out issues and prove concepts in a realistic setting, while addressing the challenges facing electrified propulsion in aviation," said Barb Esker, deputy director, NASA's Advanced Air Vehicles Program.