Guardian to be first national newspaper with biodegradable wrapping 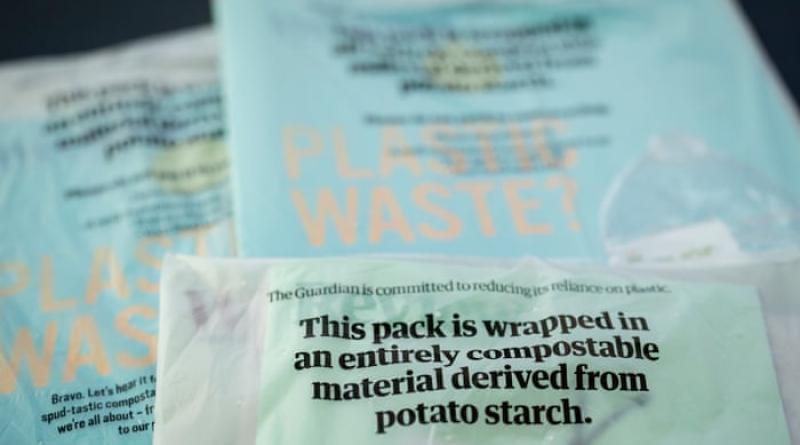 The Guardian’s print edition will no longer be sold in plastic packaging, becoming the first national newspaper to switch to biodegradable wrapping.

The Saturday edition of the paper contains a large number of supplements which are currently packaged in polythene to meet the demands of retailers and ensure they reach readers.

From this weekend, the Weekend magazine, the Guide, Feast, and Review will instead be wrapped in a material based on potato starch, which readers are encouraged to compost or put in their food waste recycling bin. The packaging does not contain any genetically modified material.

The change will increase production costs for the Guardian but is part of the newspaper’s plan to reduce plastic waste, following feedback from readers. The change will be phased in across the whole of the country over the coming months, starting this weekend for readers in London, Kent, Essex, Hertfordshire, Norfolk and Suffolk.

Readers within Greater London who use the Guardian’shome delivery service will also find the weekday edition of the newspaper is now wrapped in potato starch packaging rather than plastic.

The change comes as the print editions of the Guardian and Observer increase their prices for the first time in three years.

Subscribers to the print edition will be unaffected by the price rise.

Editor-in-chief Katharine Viner said: “Investigative reporting is difficult, costly and time-consuming. Thanks to the support of readers who buy the Guardian, the Observer and the Guardian Weekly in print, subscribe to our digital premium app, or make financial contributions to the Guardian, we are on the path to financial sustainability.

“But the economic conditions for newspapers remain very tough. Sales of all newspapers are in historic decline; advertisers increasingly spend their money with technology giants rather than publishers; and the costs of printing, paper and distribution continue to rise.”

Guardian News and Media, the publisher of the Guardian and Observer, is aiming to break even by the end of the current financial year, aided by increased contributions from readers.