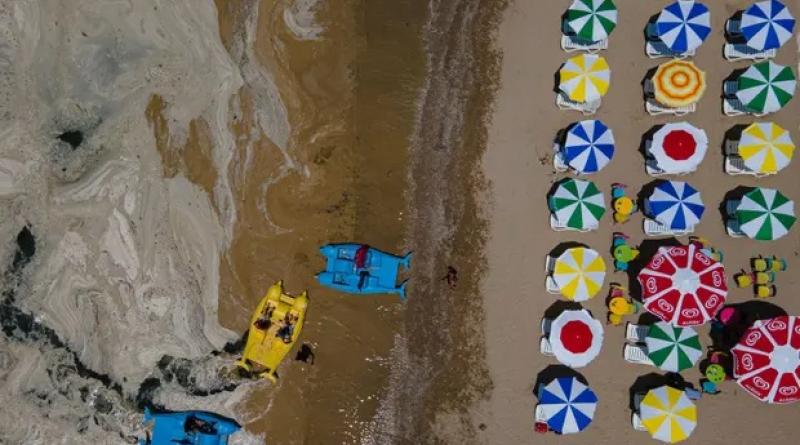 Extreme heat in the world’s oceans passed the “point of no return” in 2014 and has become the new normal, according to research.

Scientists analysed sea surface temperatures over the last 150 years, which have risen because of global heating. They found that extreme temperatures occurring just 2% of the time a century ago have occurred at least 50% of the time across the global ocean since 2014.

In some hotspots, extreme temperatures occur 90% of the time, severely affecting wildlife. More than 90% of the heat trapped by greenhouse gases is absorbed by the ocean, which plays a critical role in maintaining a stable climate.

“By using this measure of extremes, we’ve shown that climate change is not something that is uncertain and may happen in the distant future – it’s something that is a historical fact and has occurred already,” said Kyle Van Houtan, at the Monterey Bay Aquarium, US, and one of the research team. “Extreme climate change is here, it’s in the ocean, and the ocean underpins all life on Earth.” 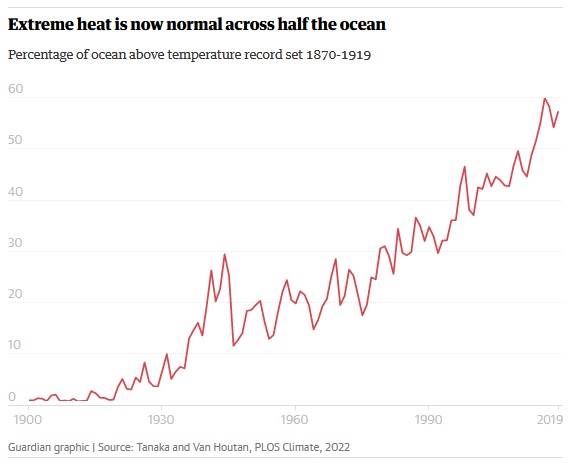 Van Houtan and his colleague Kisei Tanaka are ecologists and began the study because they wanted to assess how heat extremes were related to the loss of kelp forests off the coast of California.

“Ecology teaches us that extremes have an outsized impact on ecosystems,” Van Houtan said. “We are trying to understand the dramatic changes that we’ve seen along our coasts and in the ocean, on coral reefs, kelp, white sharks, sea otters, fish, and more.”

Other scientists reported in 2019 that the number of heatwaves affecting the planet’s oceans had increased sharply, killing swathes of sea life like “wildfires that take out huge areas of forest”.

Van Houtan and Tanaka found no measure of extreme heat existed and so extended their work globally. The study, published in the Plos Climate journal, examined the monthly temperature in each one-degree-by-one-degree part of the ocean and set the highest temperature in the 50-year period as the benchmark for extreme heat.

The scientists then examined temperature records from 1920 to 2019, the most recent year available. They found that by 2014, more than 50% of the monthly records across the entire ocean had surpassed the once-in-50–years extreme heat benchmark. The researchers called the year when the percentage passed 50% and did not fall back below it in subsequent years the “point of no return”.

By 2019, the proportion of the global ocean suffering extreme heat was 57%. “We expect this to keep on going up,” said Van Houtan. But the extreme heat was particularly severe in some parts of the ocean, with the South Atlantic having passed the point of no return in 1998. “That was 24 years ago – that is astounding,” he said.

The proportion of the ocean experiencing extreme heat in some large ecosystems is now 80%-90%, with the five worst affected including areas off the north-east coasts of the US and Canada, off Somalia and Indonesia, and in the Norwegian Sea.

“You should care about turtles, seabirds and whales, but even if you don’t, the two most lucrative fisheries in the US, lobster and scallops, are in those exact spots,” said Van Houtan, while 14 fisheries in Alaska have recently been declared federal disasters.

The heat content of the top 2,000 metres of the ocean set a new record in 2021, the sixth in a row. Prof John Abraham at the University of St Thomas in Minnesota, one of the team behind the assessment, said ocean heat content was the most relevant to global climate, while surface temperatures were most relevant to weather patterns, as well as many ecosystems.

“Oceans are critical to understanding climate change. They cover about 70% of the planet’s surface and absorb more than 90% of global warming heat,” Abraham said. “The new study is helpful because the researchers look at the surface temperatures. It finds there has been a big increase in extreme heat at the ocean’s surface and that the extremes are increasing over time.”

cover photo; Pedalos on the banks of the Marmara Sea covered with sea snot. As the climate crisis heats the seas, plankton are on the move, with potentially profound consequences for ocean life and humans. Photograph: Yasin Akgül/AFP/Getty