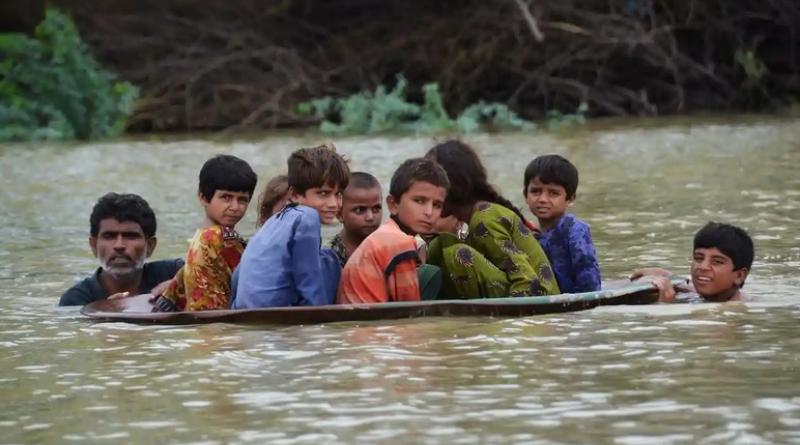 Youth groups in Africa are preparing to embark on a series of climate demonstrations on Friday to highlight the problem of “loss and damage” to poor countries blighted by climate breakdown, as only one rich country has so far stepped up with funding for the problem.

Actions will take place on Friday in Ghana, Ivory Coast, Senegal, Togo and the Democratic Republic of the Congo, with more to follow in some other African nations over the weekend.

Denmark became the first central government of a developed country to propose funding devoted to “loss and damage” – which refers to those ravages of climate-related disasters which are so extreme that no protection against them is possible.

At the UN general assembly, for which world leaders are converging on New York this week, the Danish government announced to philanthropists and poor countries that it would provide DKK 100m (£12m) specifically for loss and damage.

Scotland has also offered funds for loss and damage, pledging £2m at the Cop26 UN climate summit in Glasgow last November, and the government of the Belgian region of Wallonia pledged €1m (£0.9m) towards administration. Denmark is the first central or federal government to make a dedicated pledge.

The sums are tiny compared with the tens or hundreds of billions of dollars of losses that countries are expected to experience, but the symbolism is important. At Cop26, governments agreed to forge a framework to address loss and damage, but there was no agreement on a funding mechanism.

Carolina Cecilio, of the climate thinktank E3G, said: “Denmark’s announcement is good news. It sends the right political signal and could incentivise other countries to follow. [It] is a step in the right direction, and further adds to the momentum on loss and damage. Now we just need more countries to follow with finance commitments, and be serious about supporting the people in need.”

There are still question marks over how the Danish finance would work, and some campaigners and experts are concerned that some of it appears earmarked for insurance schemes rather than representing direct aid.

Matthew Samuda, a minister in Jamaica’s ministry of economic growth, said: “Jamaica is happy to see a developed nation stepping up to the plate and acknowledging the absolute need for loss and damage to be acknowledged. It is our hope that this will pave the way for commitments from other developed nations. Though $13m will not cover the vast devastation we are already experiencing from climatic events, I wish to thank Denmark for getting the ball rolling.”

No other developed countries have indicated they are likely to follow the Danish lead. G7 governments may be more inclined to provide finance to the “global shield” initiative backed by Germany, as president of the G7 this year.

The global shield is intended to provide funds for poor countries to gain resilience against the damages of extreme weather, for instance through providing the finance needed for developing countries to fulfil their “preparedness plans”, and could also involve a system of insurance against climate-related disasters.

The loose definitions of the global shield mean that future funding related to the initiative could also be tagged as “loss and damage” funding, noted Cecilio.

Even if no other countries step up at the UN general assembly, they will face increasing pressure in all climate forums to address loss and damage. The youth protests scheduled for this Friday, as world leaders fly home from New York, are the prelude to a sustained push on the issue.

Developing countries were unsatisfied by the meagre attention paid to loss and damage at Cop26, where the focus was on rich-country pledges to reduce greenhouse gas emissions.

hey see their next big chance at the Cop27 UN climate conference, in Egypt in November. “Cop27 must act decisively on loss and damage to reinforce the collective commitment to leaving no one behind,” said Yamide Dagnet, director of climate justice at the Open Society Foundations.

She pointed to the floods in Pakistan as an example of loss and damage that rich countries need to address. “In a single day, a third of Pakistan was inundated and more people than Canada’s entire population were affected. When you wipe out an entire agricultural area, you set back already vulnerable people by decades.”

With an eye to the Cop27 discussions, a group of island governments have formed a new initiative, called Rising Nations, launched at UNGA on Wednesday, to prepare for the worst. Tuvalu, Kiribati and the Marshall Islands called for “a global settlement that guarantees their nation states a permanent existence beyond the inhabitable lifetimes of their atolls”.

At Cop27, countries will be asked to consider new global taxes as a way of funding loss and damage payments. António Guterres, UN secretary-general, called at the UN general assembly for a windfall tax on oil and gas companies to provide the cash needed. A leaked discussion paper, seen by the Guardian, prepared by developing countries, also raised the possibility of a global tax, on carbon emissions or air travel, to provide the funds needed.

An alternative is for existing development institutions such as the World Bank and the International Monetary Fund to corral money from donor nations.

The vital issue must be to ensure a flow of cash to where it is needed, according to Carlos Fuller, Belize’s representative to the UN. “Loss and damage is already occurring in Belize,” he said. “Severe erosion is altering communities, drought and floods affecting farmers and causing infrastructure damage, coral bleaching, and salt water intrusion is affecting the water supply. These impacts undermine our people’s quality of life and the lifeblood of our economy. A financial mechanism for loss and damage must be established at Cop27 to provide support to the communities that did little to cause this crisis.”