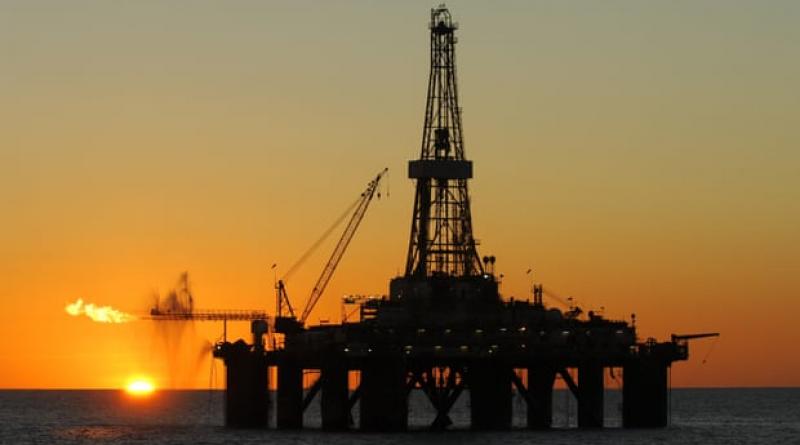 Production must fall by 6% a year to avoid ‘severe climate disruption’ but Covid-19 funding is supporting increases.

The world’s governments are “doubling down” on fossil fuels despite the urgent need for cuts in carbon emissions to tackle the climate crisis, a report by the UN and partners has found.

The researchers say production of coal, oil and gas must fall by 6% a year until 2030 to keep global heating under the 1.5C target agreed in the Paris accord and avoid “severe climate disruption”. But nations are planning production increases of 2% a year and G20 countries are giving 50% more coronavirus recovery funding to fossil fuels than to clean energy.

The Covid-19 pandemic is expected to cut production in 2020 by 7%, the report says, but this barely changes the total production expected by 2030. Countries are on track to produce more than double the amount of fossil fuels consistent with a 1.5C limit by that date.

The challenge of deliberately cutting fossil fuel production every year by similar amounts to that forced by a global pandemic lockdown is large. But a managed wind-down can help repair the global economic damage by creating many new clean energy jobs, the researchers say. 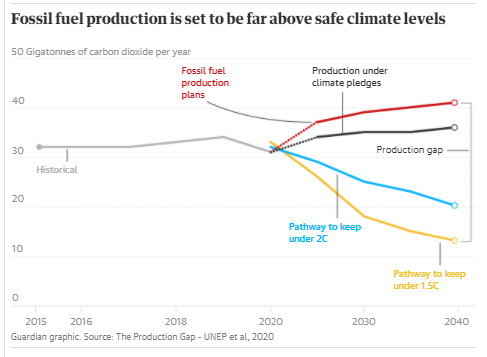 “The pandemic-driven plunge in oil prices this year has once again demonstrated the vulnerability of many fossil-fuel-dependent regions and communities,” said Ivetta Gerasimchuk, at the International Institute for Sustainable Development and a lead author of the report.

“Alas, in 2020 we saw many governments doubling down on fossil fuels. Instead of governments letting these fossil fuel projects die, they resurrect them from death – it’s kind of zombie energy.”

Inger Andersen, the head of the UN environment programme (Unep), said: “With governments injecting trillions into their economies, we find ourselves at a critical juncture where decisions can either further lock in fossil fuel energy systems or transition us to a cleaner and safer future. This year’s devastating forest fires, floods, and droughts serve as powerful reminders for why we must succeed.”

“The research is abundantly clear that we face severe climate disruption if countries continue to produce fossil fuels at current levels, let alone at their planned increases,” said Michael Lazarus, at the Stockholm Environment Institute and another author of the report.

The Production Gap report says G20 governments have committed more than $230bn (£173bn) in Covid-19-related funding to fossil fuel production and consumption to date, far more than the $150bn to clean energy. But it found that between 2020 and 2030, global coal, oil, and gas production must fall by 11%, 4%, and 3% a year respectively, to meet the 1.5C target.

The assessment of future fossil fuel production is based on the most recent published energy plans by eight key countries that produce 60% of the world’s fossil fuels: Australia, Canada, China, India, Indonesia, Norway, Russia and the US.

The report also sets out how policymakers can start a gradual decline in production, including ending fossil fuel subsidies and supporting affected communities into new jobs.

“It’s a matter of recognising that fossil fuels are no longer the economic powerhouse they used to be, and I think we’re beginning to see that happen,” said Lazarus. Mary Robinson, chair of the Elders and a former UN climate envoy, said: “Working together, governments, companies and investors can bring forward a managed decline in a way that minimises disruption and ensures a just transition for workers and communities.”

Niklas Hagelberg, at Unep, said: “Governments are injecting trillions of dollars into their economies – this is money borrowed from future generations. If we keep on investing into fossil fuels, we’re going to give our children not only a planet in its worst state, but also wasted money.”

The report has prompted a coalition of NGOs, including Global Witness, Friends of the Earth and Carbon Tracker, to write to the UK prime minister, Boris Johnson, who will host a critical UN climate summit in November 2021, calling on him to “show climate leadership” by announcing the UK would abandon its policy of maximising the economic recovery of its oil and gas reserves.

The letter adds: “The world – and its people – are looking to the UK for climate leadership. We must not fail them.”