Why Power-to-Gas May Flourish in a Renewables-Heavy World. 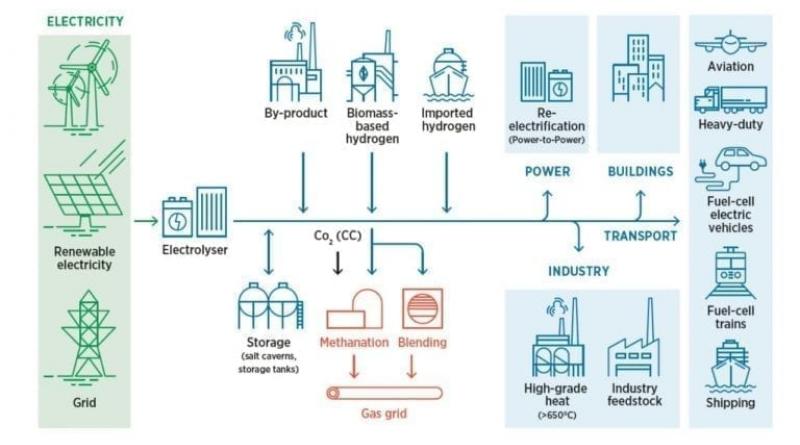 While still in its infancy, power-to-gas provides a promising approach to convert renewable power into “green” hydrogen and methane, furnishing the renewables sector with a potentially lucrative array of end-uses. A newly announced set of dramatically larger and ambitious projects indicate it has made serious inroads within the energy transition.

Power-to-gas (sometimes abbreviated P2G or PtG) describes the process of converting renewable energy to gaseous energy carriers such as hydrogen or methane via water electrolysis—mainly alkaline electrolysis, proton exchange membrane (PEM) electrolysis, and solid oxide electrolysis cells (SOECs). In its most basic sense, the electrochemical process (see sidebar “Electrolyzer Technologies”) splits water into hydrogen and oxygen, and to convert it into methane, the hydrogen is reacted with carbon dioxide in the presence of bio-catalysts. The produced “green” hydrogen can be used in a range of pathways that promise to decouple renewable generation from electricity demand—helping to avoid surplus curtailment and potentially providing the sector with an assortment of new revenue streams (Figure 1).

The produced hydrogen, for example, can be used as a fuel—either for transport, displacing oil in light vehicles, railways, and marine applications—or as a feedstock for industry. In another prominently lauded application, it can be stored and reused as a fuel to generate power through gas turbines or fuel cells—and in an advantage over current battery storage, it can store larger quantities of power over longer time periods.

But, it could also be injected into the natural gas grid, albeit with certain limits, because too high a hydrogen content raises technical and safety issues. The UK, for example, only allows injection of 0.1% hydrogen by volume, while in parts of the Netherlands the limit is 12%. Advancements to loosen these constraints are underway, however. In November 2018, for example, a UK project led by HyDeploy—a partnership that involves Northern Gas Networks, Progressive Energy, and electrolyzer-provider ITM Power—began a year-long trial to explore injection of up to 20% of green hydrogen into a small gas network.

And, if converted to synthetic methane, the gas can be used as a direct replacement for fossil natural gas in gas networks, or as seasonal energy storage. That’s important because, as the UK-based Oxford Institute of Energy Studies notes in an October 2018 paper, P2G can introduce considerable flexibility into the energy system, resulting in “system coupling”—a closer integration between the gas and electricity system that could be more cost-efficient than full electrification of gas-fueled sectors.

*Title photo: Power-to-gas essentially entails using an electrolyzer to split water into oxygen and hydrogen. The hydrogen can be used directly or fed into an assortment of processes. Courtesy: International Renewable Energy Agency (IRENA)

No future for gas without greening as soon as possible.