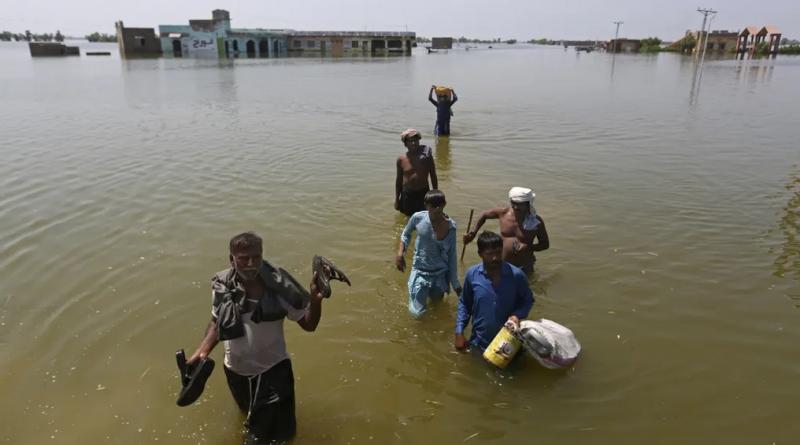 Today, Pakistan, the world’s fifth-most-populous country, is fighting for its survival. This summer, erratic monsoon rains battered the country from north to south – Sindh, the southernmost province, received 464% more rain over the last few weeks than the 30-year average for the period.

At the same time, Pakistan’s glaciers are melting at a rate never seen before. These two consequences of the climate crisis have combined to create a monstrous super-flood that has ravaged the country.

Ninety per cent of crops in Sindh have been damaged; Faisal Edhi, who runs Pakistan’s largest social welfare organisation, the Edhi Foundation, has warned that those who don’t die from the floods risk death by starvation.

A famine is coming; the only question is how soon? Economic losses are estimated to be in excess of $30bn, 50 million people have been internally displaced, there is the threat of a malaria epidemic as floodwater lies stagnant – satellite images have shown the shocking formation of a 100km-wide inland lake in Sindh due to overflowing from the Indus River – and there is no doubt that a generation will be cast backwards as already meagre education and health services are violently disrupted. More than 400 children have died and with winter coming and millions left without shelter, many more will.

This is a tragedy of nightmarish proportions and yet if you live outside Pakistan, you probably haven’t heard much about it. Given its near total lack of interest in the fate of Pakistan, it would seem that the rest of the world hasn’t considered that this epic humanitarian crisis is a peek into the apocalyptic future that awaits us all.

No nation need have any special feelings towards Pakistan, but the horrors faced by the country today are a clear warning of the consequences of universal and rapacious climate breakdown. Human beings have destroyed our one and only planet; what is happening in Pakistan today is proof of that.

Our voracious burning of fossil fuels, obnoxious disregard for the wild and natural world we inherited, and criminal consumption means that no country, no matter its wealth, will be immune from the consequences of global heating. Today it is Pakistan, tomorrow it will be California, France, Australia, the world.

While it has been touching to see how ordinary people from far away countries have shown solidarity with Pakistan, donating what they can to flood relief efforts, the silence from major international figures and western media at large has been dispiriting, if not unsurprising. The week the flood hit, there were more newspaper column inches devoted to a Finnish prime minister who likes to party than to the fact that a third of Pakistan was submerged.

This is not a question of disaster fatigue. In Europe, the same countries that pushed Syrian refugees out in rubber dinghies to die at sea have free Airbnb housing and welcome booths for Ukrainians at their airports. And it’s not that Pakistan is too dangerous to visit or deal with. Only recently, Bernard Henri Levy, the French pop intellectual, was strutting around Odessa and President Zelensky publicly thanked Ben Stiller and Angelina Jolie, “who, despite the danger, have visited us”. (To be fair to Jolie, she did visit Pakistan after the 2005 earthquake.)

This is not our first disaster caused by the climate crisis. In 2010, Pakistan also suffered catastrophic flooding. At the time, the UN secretary general, Ban Ki-moon, said the scale of flooding Pakistan had endured was greater than anything he had ever seen before. “Make no mistake, this is a global disaster,” Moon said. “Pakistan is facing a slow-motion tsunami. Its destructive powers will accumulate and grow with time.”

Back then, 400,000 cusecs of water made their way down the length of the Indus – a record-breaking amount. This year, we are expecting 700,000 cusecs.

I remember being frantic back in 2010, trying desperately to raise attention to the disaster that was unfolding before our eyes. This was the same year that Haiti suffered a tragic earthquake, but unlike Haiti there was little media attention for Pakistan, no televised concerts populated by Hollywood stars wearing branded T-shirts and raising money, no tweets by major international figures applauding the resilience of the Pakistan people. No one cared then, just as no one cares now.

The current UN secretary general, Antonio Guterres, has lamented that the world is “sleepwalking” through Pakistan’s devastating super-flood. If one takes climate change seriously, how can one be blind to Pakistan – a country that has already warmed a dreaded 2.2F?

In Jacobabad, Sindh, temperatures this summer reached 50 degrees Celsius (122F); it is “one of two cities on Earth that has passed heat and humidity thresholds that are hotter than the human body can handle”, as Vice reported. But where are the hordes of humanitarian opportunists who flex their care for war zones in Vanity Fair interviews and on Twitter?

Our countries and our lives are dispensable for the world at large. We have always known this, but we are simmering with rage now. What else can you feel when $880m was raised in a day and a half after the cathedral of Notre Dame suffered a fire in 2021 but an entire country of drowning poor must beg for climate aid and assistance?

It’s time that the world wakes up to the terrifying future we have created for ourselves. We have no chance of surviving otherwise.

‘It seems this heat will take our lives’: Pakistan city fearful after hitting 51C