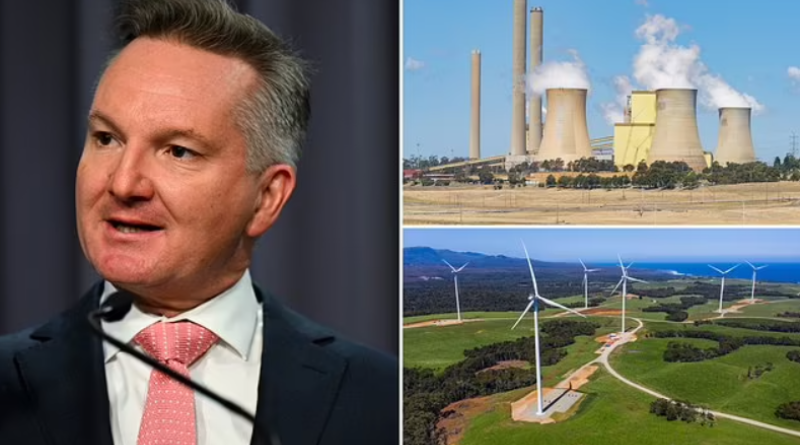 The Energy Minister Minister fired-up in a press conference when he was challenged by a journalist about the unreliability of renewable energy.

One of the reasons given for the National Electricity Market suspension on Wednesday was a lack of wind and solar power.

The journalist asked: 'Isn't part of the supply problem the fact that you cannot direct wind into the market?

The only thing you can do is to keep the coal-fired generators going to their end of life and to fix the ones that you have got now and include them in the capacity market, isn't that the short-term fix?'

Minister Bowen said the solution is to rapidly invest in renewable energy and storage - not more unreliable coal power.

'That investment has been lacking for the last decade. That is the problem.'

Mr Bowen said the current crisis has 'largely' been caused by unexpected outages at coal-fired power stations which are nearing the end of their lifespans.

'Labor is rushing toward a new system when it's not at a sensible pace,' he told 2GB.

'They went into the election promising electricity bills would be cheaper and that is not going to happen.'

Last night hospitals were ordered to reduce electricity use and millions of people urged not to use basic appliances.

The potential for mass blackouts has increased with about 1800MW of coal-fired power not operating in Queensland and 1200MW of capacity offline in the states of NSW, Victoria, South Australia and Tasmania.

The Tomago aluminium smelter in NSW, the country's biggest electricity user, was also forced to cut production to reduce the chance of a blackout.

NSW Treasurer Matt Kean on Wednesday evening begged residents not to run dishwashers until late at night, and Sydney hospital staff were ordered to conserve power in all non-clinical settings.

'This is the result of two-and-a-half decades of policy failures by all sides of politics,' Victorian state Liberal MP Tim Smith said on Wednesday night.

'Like a third world country, we are rationing power in the two first weeks of winter.'

'We've got more uranium, oil, gas, gold, diamonds, whatever. We are the most energy rich country on the globe,' he told Sky News on Wednesday night.

'We're exploding with natural resources, yet we have an energy crisis. What a farce.'

Mr Bowen said though power outages had been avoided up to now, the grid is still vulnerable to unexpected challenges.

'The system is under pressure,' he said.

The Australian Energy Market Operator (AEMO) suspended the spot market in NSW, Queensland, South Australia, Tasmania and Victoria for the first time ever at 2.05pm on Wednesday.

Why did AEMO suspend the electricity market?

It blamed the crisis on planned and unexpected coal power station outages, scheduled transmission outages, the early onset of winter and periods of low wind and solar output.

AEMO will apply a predetermined pricing schedule for each state, reportedly between $300MWh and $500MWh.

The figure will be based on the past four weeks of average wholesale spot prices.

Meanwhile, Mr Albanese has written to the United to Nations to increase Australia's emissions reduction targets in the middle of an energy crisis.

The Prime Minister signed the letter to UN Framework Convention on Climate Change Executive Secretary Patricia Espinosa in Canberra on Thursday as millions of Australians were urged to conserve power to avoid blackouts.

He was accompanied by Mr Bowen and industry stakeholders, including business groups, trade unions and energy advocates.

Mr Albanese pledged to reduce Australia's emissions by 43 per cent by 2030 compared to 2005 levels. The Coalition's target was 26-28 per cent.

'When I've spoken with international leaders in the last few weeks, they have all welcomed Australia's changed position,' he said.

Mr Albanese said his policy was solid and achievable.

'We announced last December what our policy framework would be. At the time we released the most comprehensive modelling of any policy by any opposition since federation. What we didn't do was set a target and then work out how to get there,' he said.

'What we did was work out what good policy looked like, and it happened to come out with a 43 per cent target by 2030.

'What businesses have been crying out for is investment certainty. The certainty they need to invest over a longer timeframe than the political cycle of three years, let alone the 24-hour media cycle that dominated the former government's thinking.'