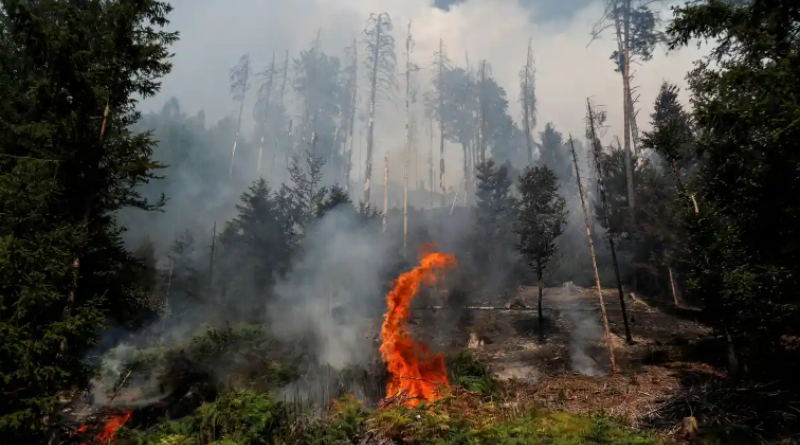 As wake-up calls go, this one had the distinction of early morning pungency. If the Czech Republic is to complete the journey from deep climate change scepticism to full recognition of the global heating crisis, history may record that the common experience of awakening to a pervading burning smell marked a turning point.

This was the sensation that greeted inhabitants of Prague and other towns and cities last Monday morning as smoke from a blaze that had broken out the previous day in Bohemian Switzerland, a storied forested area close to the German border, wafted across the country and seeped into the popular consciousness.

In scenes that Czechs previously associated with Hollywood disaster films or news footage from more southern climes, more than 400 firefighters spent the rest of the week trying to extinguish flames that spread over 1,200 hectares of the popular national park area, which was used as a location for the Chronicles of Narnia films.

Hundreds of people were evacuated as emergency services scrambled – eventually successfully – to preserve the Pravčická Brana archway, one of Europe’s most striking rock formations. The border crossing into Germany in the nearby village of Hřensko was closed.

Declaring it the worst forest fire in the nation’s history, the Czech authorities requested help from other countries. Two extinguisher planes from Sweden arrived on Friday to replace Italian aircraft that had to be redeployed to Italy to tackle forest fires there; Slovakia sent 30 military personnel along with a UH-60M Blackhawk helicopter adapted to fight fires.

The overstretched fire service advised people to close their windows, and pointedly requested them not to call emergency lines unless they saw signs of fire in their locality. The appeal reflected the fact that reports of smoke were being received in Prague, 60 miles to the south, and as far away as Pardubice, more than 120 miles away.

“It was literally a wake-up call, or a wake-up smell, for many people,” said Petr Kutilek, a political scientist and member of the Czech Green party, reflecting a belief that the event could propel climate change to the top of the country’s political agenda.

Police are investigating suspicions that the fire was sparked by human negligence. But its rapid spread at a time of record-high temperatures, and similar blazes elsewhere in Europe and beyond, has increased acceptance that the emergency is real even in circles that were once hotbeds of denial.

Petr Fiala, the Czech prime minister – whose Civic Democrat (ODS) party has long been considered climate-sceptic – told the Prima TV channel after visiting the scene that he would “have to wear blinkers and not think rationally … if I did not see that the climate is changing in a certain way and that the whole of Europe is facing fires caused by unusually high temperatures”.

That view was a far cry from the hardline climate change denialism of the former Czech prime minister and president Václav Klaus – a co-founder of Fiala’s party – who branded global warming “bogus” and called campaigners against it “a threat to freedom and economic growth”.

Other weather-related encounters in the Czech Republic have fuelled a shift in sentiment – particularly a deadly tornado that struck several villages in the south Moravia region last summer, killing six and injuring hundreds more.

Even before that, a survey conducted for Czech Radio found that 93% of Czechs accepted that climate change existed, with 86% expecting it to change the world. But in a striking contradiction, only 39% expected it to affect them personally.

Such lingering scepticism raises questions over the political will to embrace mitigating policies – doubts crystallised last month when the Czech environment minister, Anna Hubáčková, declared that cars with internal combustion engines would continue to be sold after 2035, despite an EU directive banning them in line with the bloc’s Green Deal climate package.

“The current cabinet has upheld some of the key legislation that in the long-term favours the Czech energy conglomerates benefiting from the current energy mix,” said Albin Sybera, a Czech political analyst. “There’s a reluctance to clash with the powerful lobby that has kept that mix together – and which could be undone by a greater share of renewables, for example. That’s why the main parties in the ruling coalition are reluctant to recognise the urgency to act – even in the face of a devastating fire that has destroyed swathes of the country’s most remarkable national park.”

This caution has a historical irony. Officially tolerated environmental activism under the communist dictatorship of the former Czechoslovakia is credited with having helped trigger the 1989 velvet revolution. The regime was swept from power amid a rising outcry over pollution and acid rain produced by state-run heavy industriy, which in turn destroyed much of the country’s forests.

“The visible damage to the environment disappeared in the 1990s thanks to those state industries going bankrupt, to new technology, and also to EU regulation,” said Kutilek. “The country has been busy since then trying to catch up economically with western Europe and the environment felt fine – right up until the past couple of years, when the effects of climate change began to feel obvious.”

Humanity can’t equivocate any longer. This is a climate emergency