A very strong start for VC funding in Africa this year 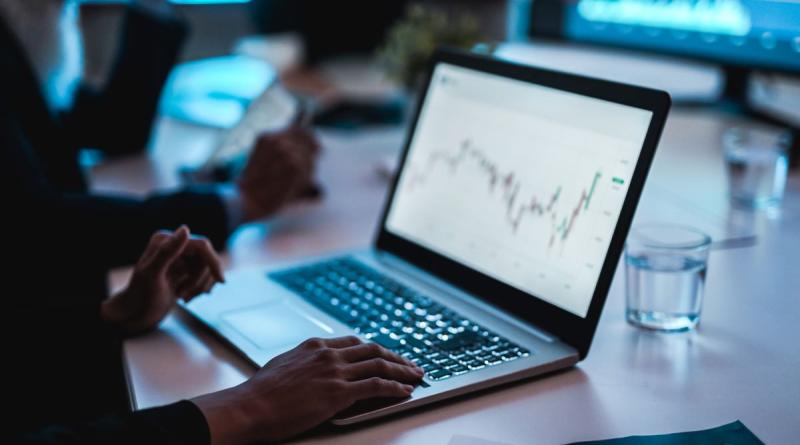 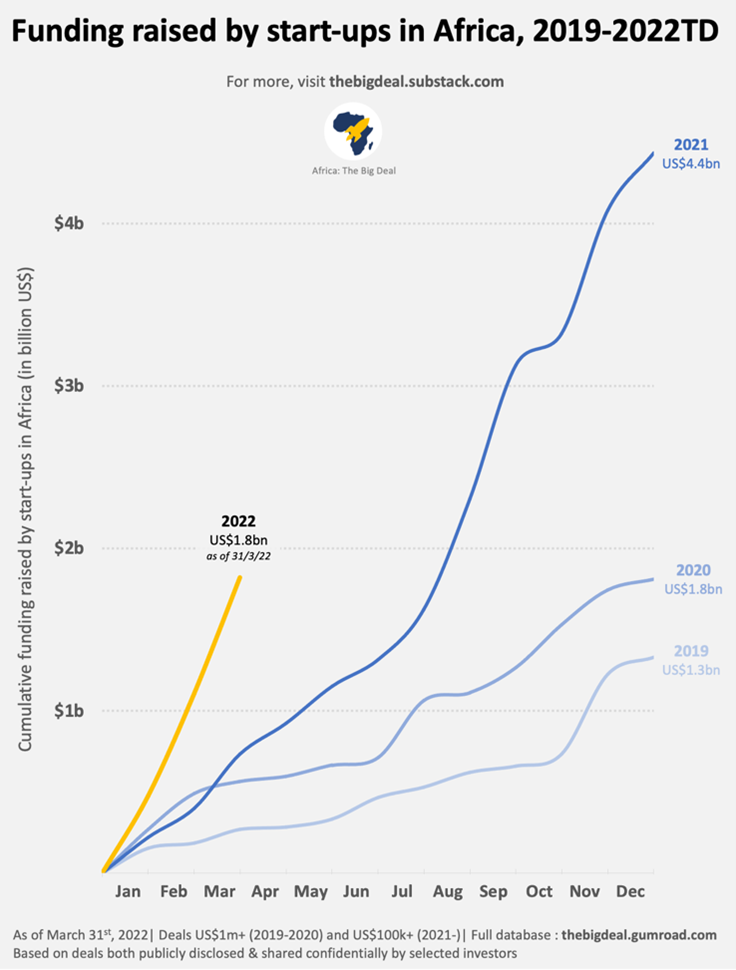 From a geographical point of view, 83% of the funding (US$1.5bn)  was raised by start-ups headquartered in one of the ‘Big Four’: Nigeria, Kenya, South Africa and Egypt (in that order). In Nigeria, year-on-year (YoY) progression (x 2.3 times) is aligned with the continental average. The average itself is heavily influenced by Nigerian start-ups who have raised almost exactly a third of all funding raised in Africa in Q1-22 (US$600m out of US$1.8 bn). Funding raised by local start-ups in Egypt and Kenya grew faster than the continental average - 4.9 fold and 3.7 fold respectively. Kenyan start-ups have already raised more in 2022 – after just one quarter – than they had raised in the whole of 2021. The only underperformer among the Big Four is South Africa, where YoY funding has in fact declined YoY (-16%). While South Africa was the country where start-ups had raised the most in Q1-21, in Q1-22 the country only ranks third, with Nigeria and Kenya seriously ahead.

Beyond the Big Four, YoY growth (x 7.7 times) has been most impressive in Tunisia where InstaDeep successfully raised a US$100m Series B for its enterprise AI and Machine Learning solution. Ghana’s strong performance was attributed to the accumulation of US$92m raised through 12 deals. The diversity in terms of number of countries where at least one US$100k+ deal was recorded is lower though. While 24 countries had recorded at least one such deal in Q1 of 2021, only 19 did so in this quarter.

Fintech is by far the sector that has attracted the most funding in this Q1, followed by logistics and retail. However, while 53% of the funding had gone to fintech start-ups in Q1 last year, only 40% of the money invested in African start-ups has gone to fintech ventures this quarter. Despite the sizeable investment raised by Flutterwave, investment in fintech this Q1 has grown more slowly YoY (1.9x) than the average.

Of the more than 250 deals closed in the first quarter of the year, three are worth highlighting. The first is Flutterwave. It announced the raising of US$250m in Series D funding on 16 Feb.[1] The company provides financial solutions across 34 markets on the continent with a focus on B2B clients, though it has recently launched successful B2C products such as remittances. With a valuation of US$3bn, the company is the highest valued ‘unicorn’ in Africa. The round was led by B Capital, with participation from Alta Park Capital, Lux Capital, and Whale Rock Capital. Follow-on funding came from investors including Avenir Growth Capital, Green Visor, Salesforce Ventures and Tiger Global. Another element that makes this deal a standout is the fact that there are still very few start-ups in Africa raising Series D rounds. The Ghanian health start-up mPharma – which raised US$35m in January 2022[2] – claimed the only other Series D round recorded in the last two years.

The second is a large funding round closed by Wasoko (formerly Sokowatch) in March 2022 when it raised US$125m in Series B.[3] Started in Kenya in 2015, Wasoko’s mission is to address the inefficiencies of local supply chains through B2B retail and e-commerce platforms. Its Series B marks the second-largest non-fintech round ever closed on the continent (Andela’s US$200m Series E[4] was the only larger one). The two co-lead investors in this deal – Tiger Global and Avenir Growth Capital – are also investors in Flutterwave. They had co-led the fintech’s March 2021 Series C funding drive. The Wasako deal is Tiger Global’s only non-fintech deal in Africa.  Notably, Binny Bansal and Sujeet Kumar, co-founders of Indian e-commerce giants Flipkart and Udaan respectively, also participated in this round. The transaction highlights the increased interest from investors for solutions addressing the needs of the informal retail sector, through BNPL (Buy Now, Pay Later) services. Other ventures in this space have also raised significant funding recently, such as MaxAB (Egypt), Twiga Foods (Kenya) or TradeDepot (Nigeria).

Finally, the third most notable deal is Tunisian AI start-up InstaDeep’s US$100m Series B funding raised in January 2022.[5] This is one of very few ‘mega deal’ investments (US$100m+) ever made in a start-up not headquartered in one of the Big Four. The company’s area of focus – enterprise AI and Machine Learning – is reminiscent of the US$85m investment raised by Kenyan start-up Gro Intelligence in early 2021.[6] This deal puts Tunisia firmly on the African start-up map. The funding volumes in the North African country are still small but growing steadily. [Funding for Tunisian start-ups grew from US$7m in 2019 to $14m in 2020, US$24m in 2021, and now already $103 million in 2022 so far.] The latest round was led by Alpha Intelligence Capital and CDIB and saw participation from Google and BioNTech (of Covid-19 vaccine fame). InstaDepp is working on AI applications as diverse as early warning systems for desert locust outbreaks and Covid-19 variants of concern, or novel immunotherapy developments. 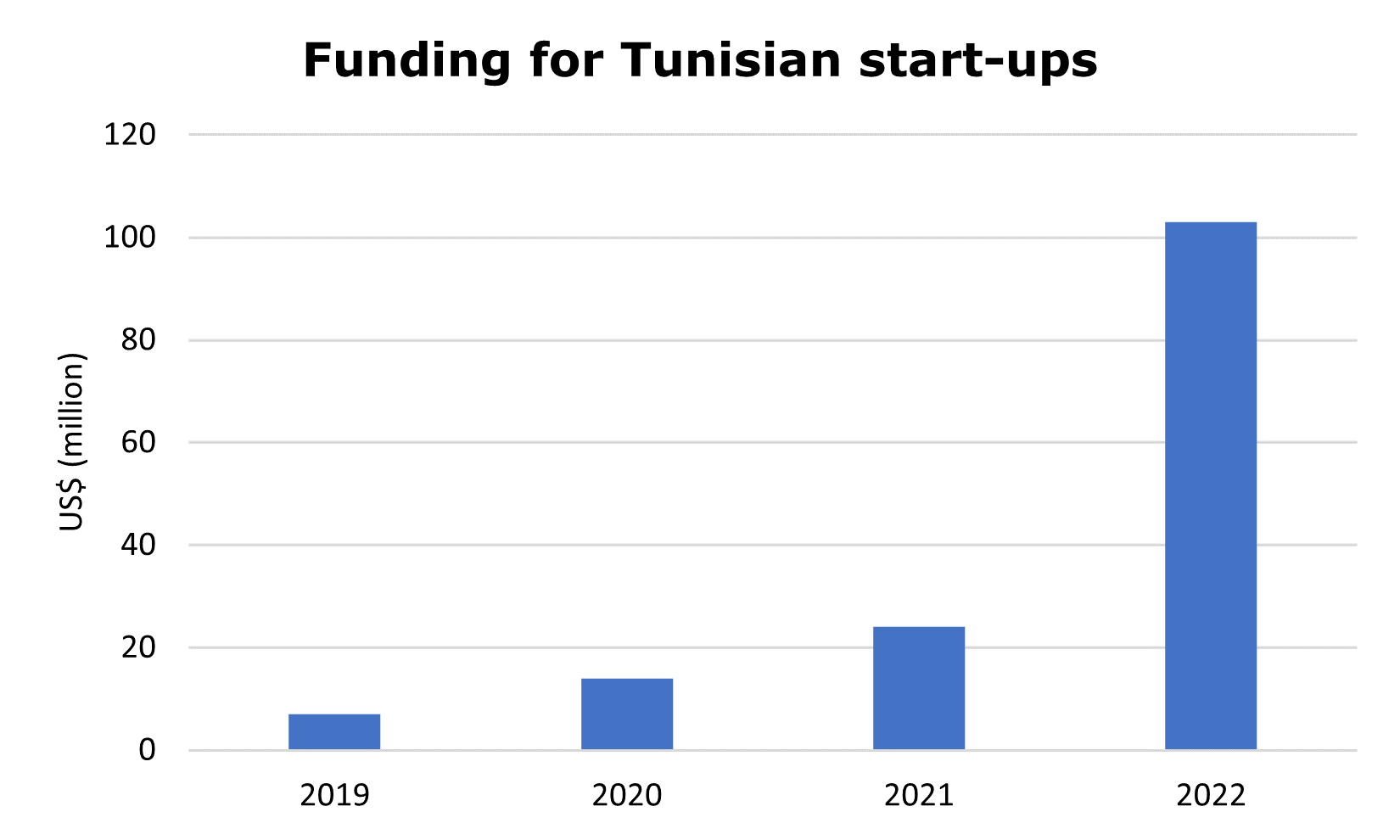 Find out more about the African start-up ecosystem at Africa: The Big Deal, a project by Max Cuvellier and Maxime Bayen.