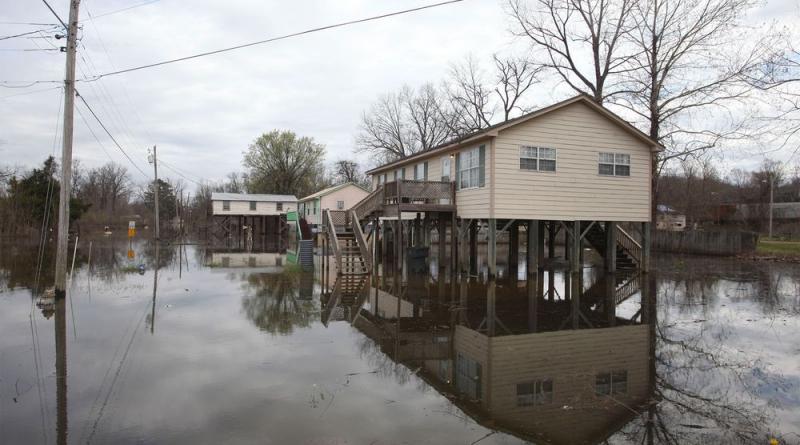 High water on the Ohio and Mississippi Rivers is snarling barges loaded with grain, chemicals and fuel, and forecasters are worried things will get worse once the snow starts to melt.

The looming U.S. spring could bring a sudden rise for temperatures and downpours across the Upper Midwest, where deep snows already cover the ground that was saturated before it froze over winter. That’s all adding up to worry along the banks of the Mississippi River, from its headwaters near the Canadian border to the Gulf of Mexico.

“The big thing is we have all the prime conditions going into this,’’ said Justin Palmer, a hydrologist with the North Central River Forecast Center in Chanhassen, Minnesota. “The upper water shed has the likelihood for moderate to major flooding.’’

What starts at the head of the river will eventually make its way down to the Gulf of Mexico, raising the potential for traffic jams on the busiest freight systems in the U.S.. There’s also the threat of inundation of cities, crop fields and businesses, including refineries and chemical plants, along its banks.

Eight refineries line the river in Louisiana, a ninth is on the nearby Atchafalaya River, and together they represent about 12 percent of U.S. operable capacity, according to Energy Information Administration data. If flooding gets bad enough on the lower Mississippi, water can be diverted into the Atchafalaya. Significant flooding could also affect the Colonial and Plantation pipelines.

Inland waterways move 60 percent of U.S. grain destined for export. In all, 702.1 million metric tons of freight, including grains, coal, chemicals and oil traveled, down the Mississippi River system in 2017, with an additional 202.1 million on the Ohio River and its tributaries, according to Waterway Council Inc. in Washington.

High water on the rivers can limit the numbers of barges tow boats can push along the waterway. As of early March, grain traffic on the Ohio was backing up at the impassable Smithland, Kentucky, lock and dam, which has been closed since Feb. 20, according to the U.S. Department of Agriculture.

Conditions along the Ohio and Mississippi Rivers have been high for months as the U.S. had its third-wettest year on record in 2018, according to the National Centers for Atmospheric Research in Asheville, North Carolina. Every state along both rivers had higher-than-average rains and snow in 2018, and nine states east of the Mississippi set all-time records.

The lower Mississippi’s depth waxes and wanes throughout the year, with the lowest water typically coming at the end of October into November, said Jeff Graschel, service coordination hydrologist with the Lower Mississippi River Forecast Center in Slidell, Louisiana. That didn’t happen this year.

On the Mississippi, below its confluence with the Ohio in Cairo, Illinois, there have been floods throughout the fall and winter, Graschel said.

To alleviate the water coming down from both the Ohio and upper Mississippi, the U.S. Army Corps of Engineers opened the Bonnet Carre Spillway 28 miles upstream from New Orleans. The spillway, finished in 1931, has only been opened 13 times, and this is the first time it has been used in back-to-back years, said Matt Roe, spokesman for the Army Corps of Engineers New Orleans District.

“We have been in this flood fight for a while but remain vigilant and ready to act as needed,” Roe said.

The worst-case scenario would be for the Midwest ground to thaw and for the snow to melt quickly while it is raining, said Palmer of the North Central River Forecast Center. That would create a lot of water that can’t be absorbed by the already saturated ground, and it would go straight into the rivers and streams.

The best case would be for a slow start to spring marked by dry days warm enough to melt the snow while nights fall below freezing. That would give the rivers time to take up water from the melting snow without having it run into the streams around the clock.

— With assistance by Barbara J Powell, and Shruti Singh