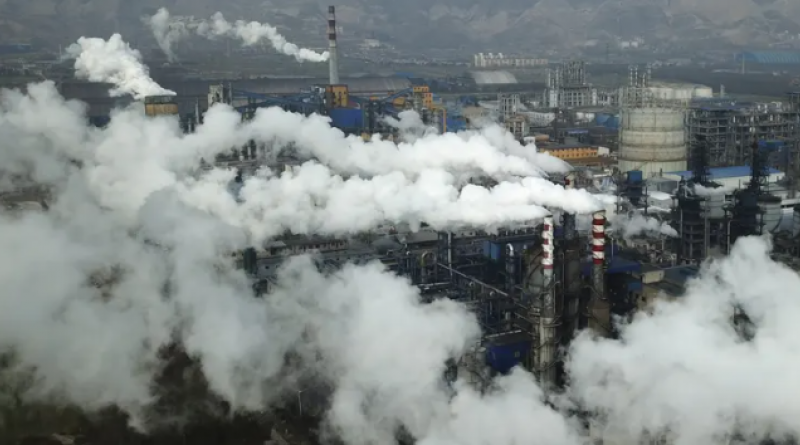 In the next four months or so, the world will find out whether it is possible for one branch of the US federal government – the state department - to accuse Chinese officials of committing genocide, and for another branch – led by the special envoy on climate change, John Kerry – to persuade China to transform the way its dirty economy operates. Is it possible simultaneously to compete for mastery of the world and to collaborate to save that world?

The outcome of this diplomatic experiment will become known at the British-hosted Cop26 in Glasgow convened to try to put the world on course for only 1.5C of warming. All countries are expected to produce their nationally determined contributions – how much they will reduce their carbon footprint. British officials insist Cop26 is about more than China and the US, but without these two players, jointly responsible for 40% of global green house gas emissions, nothing meaningful is achievable.

At issue are conflicting perceptions of modern China’s willingness to work with the west, its trustworthiness, and how best to influence a new superpower that fervently believes delivery of domestic economic prosperity is the basis of its legitimacy. There is also the issue of how well central government’s writ runs. In China, after all, “the mountains are high and the emperors far away”.

The hugely energetic Kerry has insisted it is possible to secure his climate goals with China, but in a separate silo to his diplomatic colleagues. He argues that his turf “is a freestanding international crisis, which all of us need to deal with, no matter what”. Kerry even took the trouble to hold a January press conference to insist climate change negotiations were sui generis, and need not be contingent on concessions in other domains. He wanted to kill at birth the notion that China could buy America’s silence on human rights as the price of cooperation on climate.

China’s actions on climate would not be allowed to give it any leverage over other issues, Kerry insisted. During his successful cooperation with China in the run-up to the UN Paris climate accord in 2015, he often got Ryan Hass, his close ally in the state department, to insist “US climate negotiators never were authorised to trade away other issues in pursuit of Chinese cooperation on climate”.

When Kerry visited Shanghai in April, he vowed that his relations with Xie Zhenhua, China’s climate envoy and an old ally, were his sole concern. The two of them agreed a joint statement on the “climate crisis”, a phrase the Chinese government had not used before.

The Chinese have been more sceptical about the possibility of ringfencing climate talks. The foreign ministry spokesman, Zhao Lijian, in January warned: “Unlike flowers that can bloom in a greenhouse despite winter chill, China-US cooperation in specific areas is closely linked with bilateral relations as a whole.”

But now some US progressives, alarmed at the slow pace of the climate talks, have urged the Democrats to adopt the strategy Kerry has disavowed. They demand that Biden prioritise cooperation with China on climate change, and soft-pedal on its anti-China rhetoric. “Nothing less than the future of our planet depends on ending the new cold war between the US and China,” 40 progressive groups warned in a letter to Joe Biden last week. The letter provoked outrage among the China hawks who dominate Washington.

Rebecca Peters from the London thinktank Chatham House sees the case for caution. “A big difficulty is that, as the strategy consolidates in Washington around competition as the defining feature of the US relationship with China, we are risking a lot. China needs to do more to reduce its greenhouse gas emissions and its dependence on carbon intensive industries, but centring America climate policy around confrontation will not produce the necessary changes we need.”

Malin Oud, China director at the Wallenberg Institute, says: : “The big question is whether pragmatic cooperation on climate is possible, or are we, as Biden would have it, engaged in an epic global contest between democracy and autocracy, or is it possible, like the EU tends to do, to say we should see China as necessary cooperation partner on climate cooperation, an economic competitor and then a systemic rival so we compartmentalise these issues.”

Others, such as the former Australian prime minister Kevin Rudd, wonder whether foreign diplomats can sway Chinese thinking or the trajectory of its carbon emissions, and say it is “more a case of letting domestic imperatives drive China’s creeping environmentalism”. That is the view of many British diplomats.

“The most effective thing we in the west can do to encourage China is to set an example,” said one diplomat, something British ministers admit they failed to do at the G7 by still not meeting the pledge to provide $100bn (£73bn) a year green finance, a pledge first made in 2009, and now seen as totemic by some developing states.

Speaking at a recent Chatham House seminar Byford Tsang, senior policy adviser with the climate diplomacy team at E3G, a European thinktank, insisted China was transitioning. “China has come a long way since the era of the Cop summit in Copenhagen 11 or 12 years ago when it was seen as an obstructor, and regarded climate targets as a device to hold back the developing world. Xi Jinping’s announcement at the UN general assembly last year about a Chinese phase-out of carbon put China at the time a step ahead of many developed countries, including Korea, the US and Japan.”

The announcement, Tsang said, was designed to put climate centre stage in Chinese foreign policy, no longer seen as burden on economic development, but instead through green tech an opportunity. “Xi sees climate as a way of developing a more credible, respected and loveable image of China.”

So when Xi unilaterally announced at the UN last year that China was planning for its carbon emissions to peak by 2030 and to achieve carbon neutrality by 2060, it was truly monumental, and according to Carbon Tracker, the single most impactful announcement ever made by a state, worth a reduction of 0.3% in global emissions.

But just as European leaders were caught by surprise so were many Chinese officials.

Now western diplomats anxiously question whether Chinese high-level rhetoric is being matched by actions, not just within China, but in how it frames its international interventions including the flagship belt and road initiative.

The disappointment came with the subsequent 14th five-year plan covering the period to 2025 [ published in March]. In the 75,000-word text, “carbon neutrality” was mentioned just once. The two key binding targets – 18% carbon intensity and 13.5% energy intensity reductions from 2021-2025 – left ample room for an absolute growth in emissions. Many within China had pressed for a cap, but were rebuffed.

Tsang says this is not enough. “To reach the global target, China has to move on its current targets so China should set its emissions peak well before 2030, and instead as early as the middle of this decade. It would have to stop the building of all new coal power plants as soon as possible, and end all unabated coal production by 2040-45.”

But that is not happening, climate analysts argue. The figures show China is in the in the throes of a post-Covid “smokestack recovery”.

China’s CO2 emissions have grown at their fastest pace in more than a decade, increasing by 15% year-on-year in the first quarter of 2021, a report for Carbon Brief showed.

The post-pandemic surge meant China’s emissions reached a new record high of nearly 12bn tonnes in the year ending March 2021. That is some 600m tonnes (5%) above the total for 2019.

Indeed if China’s emissions through 2021 as a whole match the growth seen over the past 12 months, no further increases would be possible during 2022-2025 if China’s carbon emissions are to peak in 2025. Lord Stern, and many other experts, have said it is by 2025, and not the later Chinese deadline of 2030, that Chinese emissions must peak if it is to meet net zero target in 2060.

China’s economy is inherently skewed to big industry, especially steel and cement, but there is a clear political conflict inside China between those that still advocate coal as a reliable source of energy security against the west and those that regard energy decarbonisation as a viable alternative.

Trying to work out which side is winning is hard.

But British diplomats highlight a clutch of encouraging signals suggesting advocates of Xi’s brand of ecological civilisation is in the ascendancy. They point to a speech by Xi in March saying meeting the 2030 target was “a big test of our ability to run the country”.

Prof Astrid Nordin, the Lau chair of Chinese international relations at King’s College London, believes the Chinese leadership has genuinely come to see fighting climate change as in its national self-interest. “The east coast of China – where all the wealth exists – is vulnerable to rising sea levels and the north is very vulnerable to desertification. Poisoning of land and pollution of water has left a wake of illness and disease. Environmental pollution may become a core source of protests, and even risk the foundations of one-party rule.”

Xi, she argues, believes the Chinese tradition of thought and planning provides a narrative that makes his country better equipped than the wayward west to combat climate change. There is still hope Xi, possibly at the next UN general assembly in the autumn, will announce an earlier target for emissions to peak.

But there are a myriad of ways between now and Glasgow in which Kerry’s model of compartmentalised diplomacy could collapse.

China, for instance, has been accused of running its solar industry using forced labour linked to an ongoing genocide. Nearly 40% of the world’s polysilicon, a key component of solar panels, is manufactured in China’s northwest Xinjiang region.

China’s explosive growth is also leading to calls among British MPs for China no longer to be treated as a developing country. Though this may sound like a symbolic change, the impacts on China’s climate ambitions would be far-reaching. Xi may say as he did in a speech this week that China will, “forever belong to the family of developing countries”. That claim is no longer true.

A further problem is the pursuit of energy efficiency intersects with the competition over technology. Michal Meidan, director of the China energy programme at the Oxford Institute for Energy Studies, has explained “geopolitical tensions” and “technological rivalry” between China and western countries could hinder the collaboration needed to improve Beijing’s storage capacity.

Finally climate change could play into the US-China rivalry contest for world leadership. Beijing has explicitly said the Chinese model “can provide a new path for all developing countries to modernisation”, and regards its belt and road initiative as living proof. At the G7 the west came up with B3W, “Build Back Better World”, an explicitly green alternative to BRI.

Barbara Woodward, the British ambassador to China, at a peace forum ahead of the Chinese Community party’s 100th centenary challenged the Chinese foreign policy specialist Prof Yan Xuetong for claiming China was exercising “benevolent authority” rather than “hegemony”.

She said: “Leadership is not about establishing authority. Leadership is about effecting change. And in a world of interdependence, change comes through cooperation. And cooperation puts a premium on trust and goodwill. Good leaders lead by listening, and not dismissing genuinely held views and concerns. By not responding to scrutiny with fragility. By setting the right tone and injecting the right substance for international engagement.”

Meaningful dialogue was important to avoid a case of “chicken talking to duck”, a Chinese phrase referring to talking but not communicating.

So disputes over China’s continuing carbon splurge could yet seep out, and then start to reinforce, and merge with the matrix of issues over which China and the west are in open contest. At this point chicken and duck will need to find a common language.

Half of emissions cuts will come from future tech, says John Kerry.