US coalition says "we are still in" at UN summit. 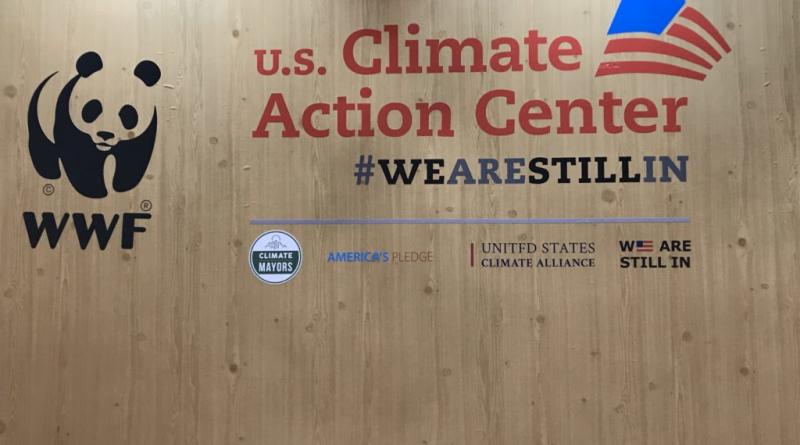 Coalition of actors from the US rejects Trump's stand on climate change.

As the US federal government steps down from the Paris Agreement, a group of representatives from local governments, business leaders, universities and many other institutions participated actively at the United Nations climate summit – even having their own pavilion.

This was the third year in a row that the “We Are Still In” coalition was at a COP climate summit, showing their rejection of the lack of climate policies of President Donald Trump. Since its launch, the coalition has doubled its size and now includes 3,600 representatives from all 50 states.

The coalition basically acts as a shadow delegation to the federal government officials. Its members met with national governments, lobbied for stronger climate actions and organized a set of events at their pavilion, including former VP Al Gore and actor Harrison Ford.

The coalition represents 70% of the GDP of the US, 65% of the population and over half of the emissions of the country. All of them have pledged to reduce their greenhouse gas emissions by improving energy efficiency, using renewable energy and electric vehicles, among other measures.

Under the Paris Agreement, the United States has committed to reducing emissions from 26% to 28% below 2005 levels in 2025. The US is the second-largest emitter, behind China. President Trump has announced the intention to leave the Paris Agreement, a process that will take a full year to happen.

“As the Trump administration backs away from the Paris Agreement, leaders across America are keeping their commitments. There is a growing demand for climate action in the U.S,” said Laurence Tubiana, former France’s Climate Change Ambassador and Special Representative to COP21.

To make the message clear, the coalition held a set of presentations at their pavilion during the two weeks at COP25. Talks included actions by states, companies and civil society on climate action as well as more informative sessions to highlight the benefits of a low-carbon economy.

This contrasted with the role of the US federal government at the conference, with actions questioned by civil society and a reduced delegation. There was expectation over the 2020 presidential elections in the US and the possibility of a new administration that brings back the country to the Paris Agreement.

“We are not here to debate the facts. We know what to do, we know the facts. What we need is the courage to act,” US actor Harrison Ford said. “The reason why I’m here is simple. It’s because Trump isn’t. His administration rejects to fight climate change and we have to do the work.”

COP25: Actor Harrison Ford for Climate Action with the "WE ARE STILL IN" group.