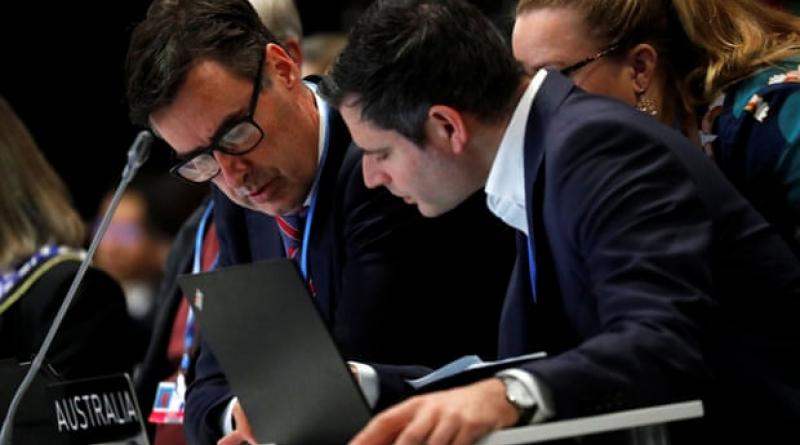 Morrison government criticised for planning to use accounting loophole to meet emissions target.

Disagreement over Australia’s plan to use an accounting loophole to meet its climate target will spill into 2020 after a United Nations conference in Madrid failed to reach consensus on rules to implement the global deal.

As talks dragged past the scheduled Friday close into Sunday afternoon, Australia was accused of “cheating” and named by other countries and conference observers as one of a handful of nations that thwarted a deal on the rulebook for the Paris climate agreement.

The Morrison government drew criticism throughout the fortnight-long conference for planning to use carryover credits, an accounting measure linked to the expiring Kyoto protocol, to meet the 2030 emissions target it set at the Paris summit four years ago.

Australia claims access to the carryover credits for beating its Kyoto targets. Opponents say those targets were unambitious and based on earlier favourable accounting rules won by the Howard government more than 20 years ago.

Using the credits would reduce what Australia needs to do to meet its 2030 target of a minimum 26% cut in emissions below 2005 levels by more than half. Analysts said there was no legal basis for Australia using the credits as the Kyoto and Paris agreements were separate treaties, and noted officials had acknowledged Australia was the only country planning to still count them.

In a last-ditch bid to reach agreement on Saturday, a group of nations, led by Costa Rica and including Britain, Germany and New Zealand, released a set of minimum standards for a deal. Described as the “San Jose principles”, they included an explicit prohibition on the use of carryover credits and other Kyoto-era allowances sought by some major developing countries, particularly Brazil.

Costa Rica’s environment and energy minister, Carlos Manuel Rodríguez, called out “Australia, Brazil and the US” for blocking progress. The group said the steps were necessary to keep open the possibility of limiting industrial global heating to as close to 1.5C as possible, a goal agreed in Paris four years ago.

Japan, not a signatory to the principles, told the final plenary meeting that it also opposed the use of Kyoto-era credits.

The proposed ban was opposed by Australia, Brazil and a small group of other countries. Australian negotiators at the talks argued carryover credits were beyond the scope of a debate over international carbon markets, a main focus of the Madrid talks, and should not be included in that rulebook.

Observers at the talks said Australia’s team argued using carryover credits was a non-negotiable instruction from the prime minister, Scott Morrison, and they were not authorised to compromise.

Richie Merzian, a former Australian climate diplomat, now with the Australia Institute, said Morrison was increasingly associated with Donald Trump and Brazil’s Jair Bolsonaro as leading culprits unmoved by fires raging in New South Wales, California and the Amazon. The US has formally signalled its intention to leave the Paris agreement next year.

“The conference fell victim to the base positions of a handful of major polluting countries, Australia included,” Merzian said.

He said that it went to the conference to reveal that 80% of its Paris target would be met through an accounting trick showed that Morrison’s claim Australia would meet its Paris target “in a canter” was legally baseless.

“Along with the position of the US, it brought to the surface for developing countries that some developed countries were not serious about their commitments,” he said. “To do this at a time when large swathes of the country are ablaze is frankly unacceptable and would be to the vast majority of the Australian community.”

Australia was represented at the talks by the emissions reduction minister,Angus Taylor, but he left on Wednesday, leaving the final negotiations to officials from the Department of Foreign Affairs and Trade.

On Monday, Taylor said Australia had “reconfirmed” its commitment to the Paris agreement and would continue to work through the UN process to deliver the only outstanding element of the Paris rulebook. He said the latest data showed national emissions were coming down.

According to the government’s quarterly greenhouse accounts, emissions dipped by 0.1% over the year to June, mainly due to a slump in agriculture linked to the drought and Queensland floods. Emissions from industry and resource extraction continued to rise.

The Morrison government released emissions projections during the talks that showed it was relying on the use of carryover credits, which it now describes as “overachievement”, to meet its Paris goal. The government assessment found without the credits Australia was expected to achieve just a 16% cutbelow 2005 levels by 2030. Government advisers previously found Australia’s fair share under a meaningful global deal would be at least 45%.

A survey of Australian businesses by the Carbon Market Institute released at the talks suggested three-quarters did not support relying on carryover credits.

Carryover accounting rules were allowed under the Kyoto protocol to encourage countries to be as ambitious as possible. They were not mentioned in the original text of the Paris agreement.

This year’s talks focused on what is known as Article 6, governing the workings of the global carbon markets, which are meant to allow countries to pay for emissions cuts where in the globe they are cheapest.

Few countries came with updated plans to reach the Paris goals. Analysts say much deeper cuts than promised at Paris are needed if countries are to achieve the goals of limiting warming to well below 2C and as close to 1.5C as possible.

There were fears the issue of future emissions cuts would be sidelined at the talks, but a “high ambition coalition” of the EU and many smaller developing countries pressed for a resolution to ask all governments to formulate stronger national plans.

The next major round of talks is in Glasgow next November.

Australia, your country is burning – dangerous climate change is here with you now

Australia fires: Thousands flee to the sea as fires race to coast