Thirty years of climate summits: where have they got us? 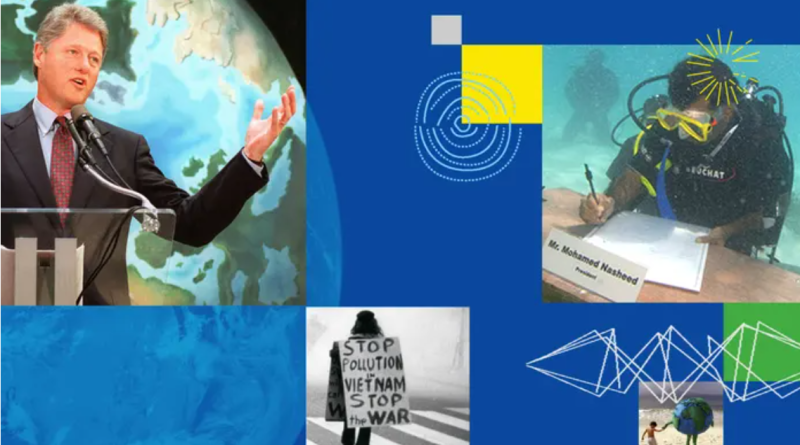 Highlights and lowlights of Cop since Rio 1992, when countries set up a system to tackle climate crisis

It has been 30 years since the Rio summit, when a global system was set up that would bring countries together on a regular basis to try to solve the climate crisis. Here are the highlights and lowlights since then.

After a few years of preparation, the very first conference of the parties took place in Berlin, setting the format for Cops to come. It soon became clear that countries needed a way to put the aims of the United Nations Framework Convention on Climate Change(UNFCCC) – to avoid dangerous anthropogenic interference in the climate system – into practice, through curbs on greenhouse gas emissions.

For the first time, a target was set for reducing greenhouse gas emissions: the aim was to bring them down by about 5%, compared with 1990 levels, by 2012, with all developed countries taking on national targets while developing countries were allowed to continue increasing their emissions. 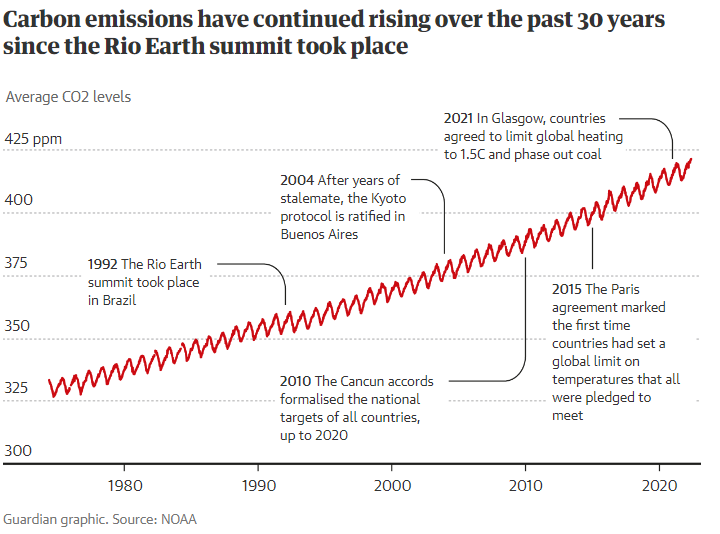 But the US Congress would not ratify the treaty, which meant the protocol could not come into operation. Cops continued each following year but there seemed to be no way round the central political impasse –.

And then the Kyoto protocol was rescued from the scrap heap of history by an unexpected source – Russia. It wanted to join the World Trade Organization and offered ratification of the protocol as a quid pro quo.

Russia’s decision, in October 2004, brought the protocol into legal force. But with the US still against the protocol, it could only ever have a limited impact. Eventually, most countries fulfilled the narrow terms of their Kyoto commitments but this had little effect on global emissions as China and the US continued to increase their carbon output throughout the 2000s, with China overtaking the US as the biggest source of emissions.

With the Kyoto protocol in effect, but largely toothless, the UN realised it would have to find a new way forward. And so Yvo de Boer, appointed as executive secretary of the UNFCCC in 2006, proposed a roadmap that would lead to a replacement for or successor to the Kyoto protocol that would involve all countries. The fractious and taut meeting carried on long past the Friday deadline for the end of talks, as the US delegation – on the line constantly to the George W Bush White House – refused to agree to anything. Finally, as developing country delegates grew more exasperated, one took the floor. Kevin Conrad, of Papua New Guinea, told the US: “We ask for your leadership, we seek your leadership, but if you’re not willing to lead, please get out of the way.”

With that, the US finally agreed to sign up to the Bali roadmap, with as its end goal a deal on emissions to be signed by the end of 2009.

Hopes were high at Copenhagen that a deal to replace the Kyoto protocol could be signed by all countries, developed and developing. But as the conference drew closer, it became apparent that a fully fledged new treaty was not going to happen and officials tried to dampen expectations in the preceding months by making it clear that Copenhagen would produce only a “political declaration”.

In the event, even that proved nearly impossible to achieve. The Danes lost control of the complex UNFCCC procedures and China was reluctant to sign up to any deal that implied it would cut its emissions. World leaders flying in for the final day of the conference were greeted by scenes of chaos.

Barack Obama and other leaders in the end succeeded in signing up all of the world’s major emitters, including China, to agree targets on greenhouse gas emissions for 2020. But that achievement – which marked the first time developed and developing countries had jointly agreed to take responsibility for reducing greenhouse gases – was largely ignored by the rest of the world, who saw only the discord and dismay.

At Cancún, the political declaration reached in Copenhagen was finally passed into legal form, by a series of Cop decisions under the UNFCCC. The Cancún accords formalised the national targets of all countries, up to 2020.

The failure to write a new protocol or legally binding treaty at Copenhagen revealed the fragility of the UN process. Luckily the then EU climate commissioner, Connie Hedegaard, had a plan to get the countries to agree a roadmap to a new treaty – the plan that eventually led to the Paris agreement.

The EU faced opposition from China and India, and the talks dragged on long past their Friday deadline. But the EU did not cave, and instead gathered a coalition of developed and developing countries. Isolated, China and India gave way and the world embarked on the road to Paris.

The French were determined to avoid the mistakes of Copenhagen and spent the year before the conference engaged in non-stop “360 degree diplomacy”. World leaders flew in for the start, to instruct their teams on achieving agreement, and some of the thorniest issues were finessed – the promise of $100bn to poor countries made at Copenhagen was reaffirmed, the national targets for emissions cuts were put in a non-binding annexe to the legally binding treaty, and the question of whether to set a temperature limit of 1.5C or 2C resolved by including both.

The final agreement marked the first time that countries had set a global limit on temperatures that all were pledged to meet.

Delayed by a year because of the Covid pandemic, Cop26 was always going to be a crucial Cop. The national commitments, known as NDCs, that countries brought to the Paris agreement were inadequate to hold the world to 2C, so more stringent targets were essential. New science also showed how dangerous reaching 2C would be, so a key goal for the UK hosts – to reach a deal that countries would aim to limit global heating to 1.5C – was achieved, and countries also agreed – despite a last minute hitch following objections from China and India – to phase out coal.

The agreement was fragile – but it represented substantial progress as countries agreed to return in 2022 and every year thereafter with tougher national plans on emissions cuts.

The ink was hardly dry on the Glasgow pact when the world began to change in ways potentially disastrous for hopes of tackling the climate crisis. Energy and food price rises mean that governments face a cost of living and energy security crisis, with some threatening to respond by returning to fossil fuels, including coal.

However, the war in Ukraine strengthens the argument for renewable energy, which compares favourably to high fossil fuel prices. It has also made energy and climate into top national security issues, which should gain government attention.

But the geopolitical shifts mean Egypt – broadly friendly to Russia, on which it relies for grain, some fuel and tourism – will face a diplomatically tricky task.