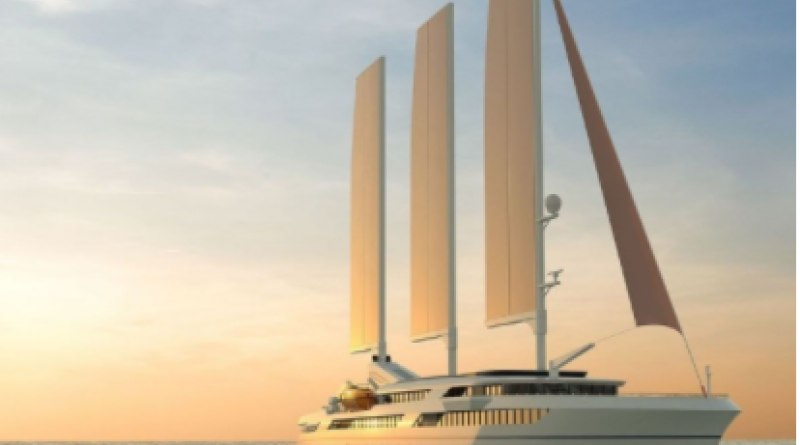 Massive reductions in shipping CO2 are required to meet the IMO goal of 50% net emissions reduction by 2050. Making small efficiency gains in current fossil fuelled internal combustion technology and using wind assisted systems is unlikely to make the significant changes to greenhouse gases that are being sought

KNUD E. HANSEN’s developed a concept design for a fully wind powered vessel called the WindShip almost 20 years ago. At the time, detailed research into the economics and sail technology showed that a fully wind powered vessel for bulk and liquid cargo was feasible on certain trading routes, but that the additional capital expenditure could not be recouped due to very low fuel prices.

The economic and environmental conditions of today make the WindShip much more attractive, and combined with advances in other key technologies, it enables the WindShip to be even more economical. These key technologies include materials, control systems, weather forecasting and communication systems.

Flexible and durable materials that out-perform traditional cloth for soft sails are readily available from the sail yacht industry. Light and strong composite materials for stiff sail systems can now be made in the large sizes necessary for propulsion of merchant vessels.

Modern sailing rigs can benefit from fully automated control and actuation for tracking and fine tuning to optimize the rig for the varying wind conditions. Also important will be automatic load alleviation to ensure the rig is not overloaded by wind gusts or vessel stability compromised.

Weather forecasting is getting increasingly accurate and in conjunction with computer simulation will enable wind-powered ships to utilize essentially real-time weather routing to ensure the optimum use of wind along the route.

Autonomous and unmanned operation reduce operating costs and simplify the ship design while also increasing cargo capacity. However, they require a global communication system with a massive data bandwidth. Current satellite communication systems are sufficient to enable world scale real-time control of military type aerial drones but would be prohibitively expensive for commercial operations. In the near future, new satellite Internet systems such as StarLink should bring the down the costs of remote-control technology for the WindShip to a level that the cost savings of unmanned vessels can no longer be denied.

Currently there is a race between green fuels and wind propulsion for powering of the worlds future merchant fleets. Understandably, there is considerable investment in green fuels such as hydrogen and ammonia by energy companies and engine makers in utilising as much existing technology and infrastructure as possible. By comparison, proponents of wind propulsion are essentially starting from ground zero in terms of production systems and investment capital. Despite this handicap, the benefits of wind propulsion for ships are too good to be ignored in this new age of clean energy and low emissions.

The advantage of direct propulsion by wind is energy efficiency. The energy is used directly at the source with no processing, transportation or energy conversion required in contrast to fuels such as oil or gas. This in itself will already mean a considerable energy and emission saving. In typical ‘well-to-wheel’ or for ships ‘well-to-propeller’ analysis, it is estimated that the fossil fuel production and transportation costs already amount to 10-20% of the total energy consumption for a merchant vessel. When combined with best internal combustion engine thermal efficiencies of 45-50% and a propeller efficiency of 60-70%, the total effective fuel efficiency of a conventional fossil fuel powered vessel is only about 25-30%.

A further advantage of modern wind propulsion systems is the opportunity to make them completely autonomous in operation, in much the same way as wind turbines operate. The relative simplicity of wind propulsion devices compared to the intricate complexity of internal combustion engines and their supporting cooling, lubrication and fuel systems provides a further pathway to a fully autonomous vessel that has no crew on board. The unmanned ship is a complete topic in itself with myriad issues, but here it is enough to simply recognize the symbiotic benefits of wind ships and unmanned operations in lowering the cost of shipping.

Apart from the wind propulsion system, other forms of renewable energy will be essential for the modern WindShip. Although the efficiency of wind propulsion cannot be denied, the reliability of wind as an energy source is an obvious concern. Solar photo voltaic (PV) cells and battery storage systems will be needed for everything from power sail rig mechanization to ballast and bilge pumps and communication systems.

The previous high cost of PV cells has dropping quickly, driven by the increasing maturity and global uptake of solar power both on-site and for mass energy harvesting and distribution.  If this trend continues, with a fully installed cost of 100 USD per kW, the payback period is only three years compared to fossil fuelled power generation. This is based on a conservative 20% harvesting capacity and PV cell efficiency of 22%.

Nevertheless, most ballasting operations will take place in port. For tanker vessels, cargo pumping is a power-hungry activity but one where the vessel can utilise shore power. An additional benefit of the sail mechanization system that enables the WindShip sails to tack and reef is also the capability to track the sun. This will maximise the use of solar power in port instead of using shore power, further lowering the cost to the operator.

When the wind speed is very high, it may be more efficient to utilize the propellers as wake turbines to generate electricity and store it for where the wind is low, or to power the vessel systems when there is no or little solar power available such as overcast days or night time.

The lithium-ion battery is one of the key technologies that is enabling a clean and energy efficient future.  Although numerous studies have shown that battery weight, volume and costs are prohibitive for long distance shipping propulsion, the high round-trip-efficiency of about 90% make batteries an obvious choice for short-term power use and storage.

The high cost of lithium-ion batteries has been dropping quickly, driven by the increasing maturity and uptake of electric vehicles and on-site energy storage. From a price of over 1,000 USD per kWh in 2010, Bloomberg reports that the cost of lithium-ion batteries is reducing at over 20% per year. If this trend continues, a cost of under 100 USD per kWh is certainly possible for KNUD E. HANSEN’s latest design, WindShip 2025.

On most trading routes, renewable energy will be insufficient to provide all the electrical power for a wind ship that also needs to keep a regular and predictable schedule. Economical power production from clean fuels such as hydrogen is also in its infancy. Technologies such as underground steam reforming and using ammonia as a hydrogen carrier are maturing. The direct use of ammonia as a clean combustion fuel or in a fuel cell is also gaining traction due to its ease of transportation as it is a liquid at room temperature and low pressures.

One of the most constrictive aspects of most wind propulsion systems is the size of the sail rig and the obstructions it places on cargo stowage and handling for merchant vessels. This is most relevant for container vessels where much of the cargo is stowed above the holds, and large sail rigs would interfere with the ports’ container cranes. Furthermore, container vessels sail at higher speeds than most other merchant vessels due to the higher value of container cargo making wind propulsion less practical. Innovative solutions will be needed for wind powered container vessels. A multi-hull vessel where there is more deck area for cargo and less hull resistance is one possibility.

Tankers and bulk carriers which don’t require deck space for cargo stowage and travel at speeds more conducive to wind power are the logical first types of vessel for wind powering. These vessels also make up about half of the worlds merchant fleet by number of vessels. If deadweight is considered, this increases to about 70% of the cargo moved by sea. However, due to the relative value of these vessels and their cargo when compared to other merchant vessels, there is also the least commercial impetus to invest in wind power solutions for these types of vessels. There will likely also be a reduced demand for oil tankers as the world transitions away from fossil fuels to more sustainable and less polluting energy sources. However, if ammonia succeeds in becoming a fuel or an effective way to transport hydrogen, then the need for ammonia tankers will obviously increase.

Apart from the sails and associated rig impinging on cargo stowage and handling, development of wind propulsion systems is also being complicated by a number of other effects on ship design and operation. The most significant of these are:

* The additional wind forces from the sail and rig making manoeuvring more difficult especially in and around ports.

* The height of sailing rigs increasing the vessel’s air draught and ability to navigate under bridges.

* Effect of vessels’ superstructure on the wind and sail interaction.

* The reduced visibility from the bridge due to the sail system.

None of these are unsolvable but are additional considerations for the development of wind ships in much the same way that the location of engine rooms and casings are a necessity for the design of conventional motorships.

The KNUD E. HANSEN WindShip 2025 is an unmanned 50,000dwt bulk carrier vessel with a high lift wing type sail rig ideally suited for mechanisation and automated control. Being unmanned eliminates the need for life-saving equipment, hotel systems and large associated electrical loads such as HVAC and lighting. Removing the vessel superstructure also reduces the aerodynamic drag and improves the performance of the sail rig.

To further reduce vessel complexity and fire risks for an unmanned vessel, the WindShip 2025 also has no engine room. Generators, fuel cells, fuel storage and batteries are all modularised and are installed on the aft transom according to the requirements of the route.

The vessel has an auxiliary propulsion system using two aft azimuthing electric pods with controllable pitch propellers. The pods can also operate as wake-turbine generators. In a strong favourable wind with a harvesting speed of 16 knots, about 2,000kWe of power can be generated and stored. A propulsion power of 2MW is also enough to power the WindShip 2025 at 11 knots and run all auxiliaries when there is no wind to sail.

An economic study for the WindShip 2025 is presented in a hypothetical trade scenario of shipping five million tons of grain per year for a conventional motor ship and the WindShip 2025. Two routes were analysed: Rotterdam to New York City and return for the Atlantic trade and Vancouver to Shanghai return for the Pacific route.

As can be seen in the table, the economic performance was best for both the conventional motor ship and WindShip 2025 at about 11 knots. The operational costs of the WindShip 2025 were between 13 and 22% less than the conventional motorship depending on the route. However, the CO2 saving was between 45 and 61% which will already meet the IMO 2050 reduction target of 50%.

In the future as green energy technologies mature a mix of wind propulsion, green fuels, solar and batteries will be utilized, and the choice between these energy systems will be highly dependent on the type of vessel and the route. As discussed above, a reliable merchant cargo WindShip 2025 service will still need an auxiliary propulsion system utilising batteries or fuels for port manoeuvring and low wind conditions. However, there is no denying that wind is still the cleanest form of propulsion and also the lowest cost which is reason enough to keeping innovating and developing wind propulsion technology.