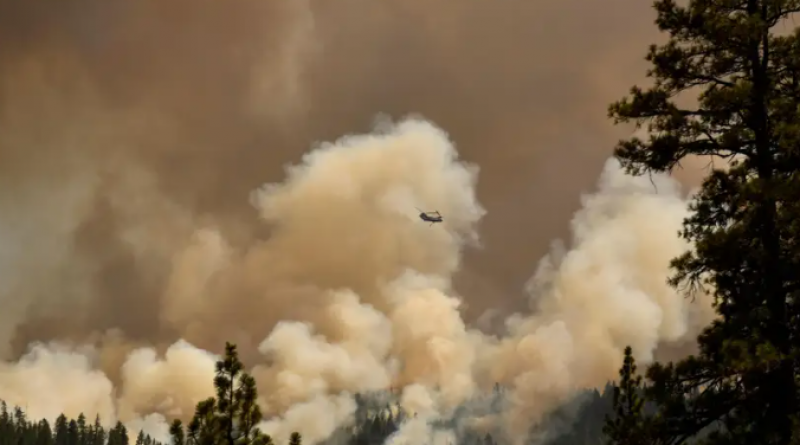 The world set a scary new record last month: Wildfires around the world pumped out more carbon dioxide than ever before.

The majority of those emissions came from wildfires two regions, western North America and Siberia. Blazes in both regions were fueled by heat waves, drought conditions, and low soil moisture levels—three hallmarks of the climate crisis. In the case of North America, monster fires are still burning in the U.S. and continue to threaten everything from homes and giant sequoias. What’s been most shocking about the fires in the northern hemisphere is, well, everything.

“What stood out as unusual were the number of fires, the size of the areas in which they were burning, their intensity, and also their persistence,” Mark Parrington, senior scientist and wildfire expert at the Copernicus Atmosphere Monitoring Service, said in a statement.

Indeed, the massive fires in northeastern Siberia’s Sakha Republic and were so large and intense that they sent ribbons of smoke to the North Pole in June. Though they started to die down last month, some were still burning in early September.

“It’s a similar story in North America, parts of Canada, the Pacific Northwest, and California, which have been experiencing large wildfires since the end of June and beginning of July and are still ongoing,” Parrington said. Northern California’s Dixie Fire, for instance, is the largest single fire in state history, burning down nearly 1 million acres. While fires in the West and Siberia are the two biggest sources of emissions, destructive blazes have hit the Mediterranean region hard from Portugal to Turkey to Syria.

It’s impossible to talk about these fires without talking about climate change. Hot, dry weather is becoming more common and can lead to megafires like those that have enveloped the northern hemisphere this year—and other recent years for that matter. The emissions from these fires, including some that burned through forests that corporations had bought to offset their emissions, will worsen the climate crisis and up the risk of even more damaging blazes to come.

Forest managers urgently need to adapt to avoid even more catastrophic losses. That means considering more managed, low-intensity burns to thin out brush that allows fires to spread and looking at other outside-the-box solutions. Any serious plan to control wildfires must also include phasing out fossil fuels use. By getting serious ending carbon emissions, we can help break the cycle we’re currently locked in.

More than 47,000 Brazilians hospitalised every year due to wildfire air pollution

Wildfire smoke linked to 19,000 additional Covid cases in US West and 700 deaths