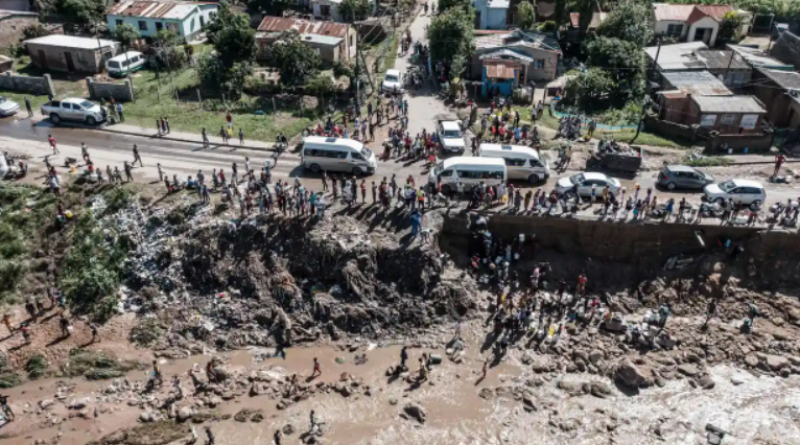 Police in South Africa have used stun grenades to disperse a crowd calling for more and better official aid for victims of the lethal floods earlier this week.

The demonstration on Thursday briefly blocked a major highway in the eastern city of Durban, where more than 300 people have died in flooding in recent days.

The president, Cyril Ramaphosa, described a “catastrophe of enormous proportions” and attributed the disaster to the climate emergency.

South Africa is bracing for more heavy rain in districts hit by the record-breaking rainfall earlier this week.

“It is telling us that climate change is serious, it is here,” Ramaphosa said as he visited the flooded metropolitan area of eThekwini, which includes Durban, on Wednesday. “We no longer can postpone what we need to do, and the measures we need to take to deal with climate change.”

The South African weather service has warned of continuing high wind and rain bringing the risk of more flooding in KwaZulu-Natal and some other provinces over the Easter weekend.

Meteorologists said the flooding had taken them by surprise. Some parts of KwaZulu-Natal recorded almost their average annual rainfall in 48 hours.

“While impact-based warnings were indeed issued in a timely manner, it appears that the exceptionally heavy rainfall exceeded even the expectations of the southern African meteorological community at large,” a statement from the weather service said.

The service said that although it was impossible to attribute an individual event to the climate crisis, “we can state with confidence that globally (as a direct result of global warming and associated climate change), all forms of severe and extreme weather … are becoming more frequent and more extreme than in the recent past. In other words, heavy rain events such as the current incident can … be expected to recur in the future and with increasing frequency.”

The death toll is expected to increase as search-and-rescue operations continue, officials said, and the full extent of the destruction becomes clear.

Thousands of people have been made homeless by the floods, roads and bridges were destroyed, and at least 248 schools have been damaged. In one township a Methodist church was swept away. A Hindu temple was badly damaged in Umhlatuzana, Chatsworth, near Durban, after a river burst its banks. Elsewhere, flooding triggered huge landslides. Durban’s port, the busiest in southern Africa, was also badly hit.

In Amaoti, a township north of Durban, residents balanced precariously on the edge of a broken road, trying to fetch clean water from a broken pipe underneath.

The flooding destroyed water pipes and power cables across large parts of Durban and the surrounding eThekwini metropolitan area, and it will take at least a week to restore those services, officials in Durban said. NGOs were scrambling on Thursday to bring relief to badly hit communities.

The damage to Durban and the surrounding eThekwini metropolitan area is estimated at 757m rand (£39m), the mayor of eThekwini, Mxolisi Kaunda, said on Thursday.

At least 120 schools have been flooded, causing damage estimated at more than 380m rand and bringing officials to temporarily close all schools in the province. At least 18 students and one teacher have died in the floods, the education minister, Angie Motshekga, said. “This is a catastrophe and the damage is unprecedented. What is even more worrying is that more rain is expected in the same areas that are already affected.”

Volunteers said they were desperate to source food, clothes and other essentials.

In a pitch-dark hall in Durban’s Glebelands hostel district, volunteers used the torches from their mobile phones to register scores of displaced people overnight. “We are just helping the people because we care,” said Mabheki Sokhela, 51, who helped organise temporary shelter at a community hall.

The ruling African National Congress, in power for nearly 30 years, has frequently been criticised for inadequate responses to natural disasters.

Rescue efforts by the South African National Defence Force were delayed as the military’s air wing was affected by the floods, but the military has now deployed personnel and helicopters to bring in humanitarian relief.

Rain continued in parts of Durban on Wednesday afternoon and a flood warning was issued for the neighbouring province of Eastern Cape.

Durban was the centre of deadly riots last July that killed more than 350 people, South Africa’s worst unrest since the end of apartheid.

After the relentless rain, South Africa sounds the alarm on the climate crisis