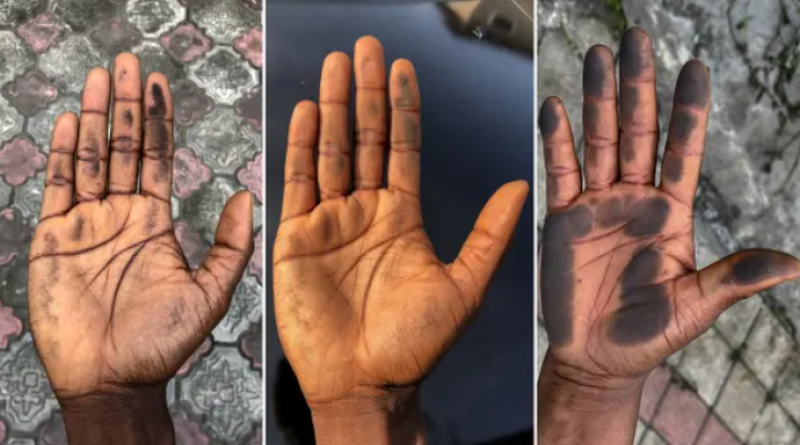 Several clusters of thick black soot clasp to the lungs of a 24-year-old man in a photo taken while he was being operated on by Iboroma Aku Shed in the oil-rich Nigerian city of Port Harcourt.

Doctors opened up his chest intending to repair a hole in his diaphragm, but during the operation last year they became aware of the charred condition of his lungs.

“When we saw his lungs we were shocked to see these black deposits spread all over,” Shed said. “This is a person who doesn’t have a history of smoking, who is very young. But he lives in the coastal area of Rivers State, where illegal oil refining is carried out.”

The soot problem in Rivers State is not new, but it has significantly worsened in recent years. Carbon particles emitted from a shoddy process of refining crude oil have visibly built up in the atmosphere. Black clouds regularly darken the skyline, dark layers visibly form along bright coloured buildings, and vehicles and homes are covered with deposits.

“When you wake up in the morning, if you don’t mop your floor, the soles of your feet become black,” Shed said. “When you go to your car, you have to wash the soot from your windshield. When you pick your nose, your children’s nose, when you breathe. We live with it every day and we’re seeing the effects becoming worse.”

Doctors in Rivers State have been sounding the alarm in recent years over the mounting medical toll of soot and air pollution on millions of people in cities across the oil producing Niger Delta region, and particularly in Port Harcourt.

Respiratory-related illnesses such as asthma and lung infections have almost doubled over the past five years, according to several doctors.

Deaths suspected to be linked to air pollution also appear to have risen, doctors said, though cause of death is rarely possible to determine with absolute certainty as autopsies are not commonly carried out.

Across the Niger Delta, the profound legacy of environmental destruction by multinational oil and gas companies reverberates, with pollution evident in the creeks, rivers and the air.

The current soot crisis in Rivers is, however, largely linked to illegal oil refining – a lucrative hidden market trade that has become an essential part of life in the city, complicating efforts to curb it.

“The frightening thing about the soot is it’s been going on for years,” said Bieye Briggs, a doctor and environmental activist in Port Harcourt. “It was invisible before but now it has become visible. We’ve lived with environmental destruction, we know the air is polluted but we’re seeing its effects in a more alarming way.

“My own daughter, she sometimes struggles to breathe. Sometimes you’ll blow her nose and see her nostrils have black substances. It’s a daily reality.”

Local government officials say oil from “the boys” – as the young men who operate the refineries are known – has on occasion in recent years been the dominant fuel source in Rivers State. It can be found in generators, vehicles, businesses, hospitals and universities, sometime sold for as low as half the cost of fuel supplied through Nigeria’s state-run petroleum company. “Even the fuelling stations buy it and sell it at official prices,” a government official said.

Demand is driven in part by wider failings in Africa’s largest oil producer, which does not refine its own oil and instead imports it.

Chidi Lloyd, a local government chairman in Ekwueme, which has a concentration of illegal refineries, said authorities have been cracking down. “We shut down at least 300 refineries, we put incredible pressure on them to stop their activities,” he said. “People can attest and tell you how hard we fought them.”

Scores of young men have been arrested as well as senior police officers and security officials found to be controlling and profiting from criminal networks, Lloyd said.

“The issues are in fact much deeper than the government suggests. They are focused on the boys, but who polices the rivers? Who polices the creeks and the pipelines? Who controls the ports? It’s the security agencies. Who buys the fuel? Everyone does because it is cheaper and people are struggling. So the boys are only a small part of a much bigger issue.

“Some of them are chemical engineers. They have expertise but nowhere to channel it. And we know that the quality of oil they produce is often even better than the oil we import,” he said, referencing a landmark report in 2020 that found that hidden market fuel was less polluting than the highly toxic diesel and petrol that European countries export to Nigeria.

The chain involves pipeline vandals (150,000 barrels of oil are estimated to be lost to bunkering every day), illegal refineries, and the agents who sell the oil on, both inside Nigeria but also in neighbouring Benin and Togo, transporting it in boats along the coast. The fuel passes unmolested through road checkpoints and waterways staffed by the police and military forces, in a sign of complicity with the trade at an official level.

After the recent clampdown, refinery operations temporarily moved into less-policed areas, and residents in some areas said the soot in the atmosphere felt lighter than it had been in months. But there were reports of some businesses struggling to cope with the higher costs, as people accustomed to buying fuel on the hidden market were obliged to buy more expensive, state-supplied fuel.

Less than a kilometre into a forest in Ikwerre, north of Port Harcourt, diesel drenches the hot earth leading up to a large, fenced clearing, where a refinery was shut down earlier this year. A pool of discarded diesel cut into the ground runs 10ft deep, security officials said. The ground and surrounding trees are burnt and charred. The machines and containers they used were cleared away, but the surroundings have not been remediated and appear ripe for refining operations to return.

NIGERIA: Zugacoin and Green Enclave to develop a smart city in Rivers State