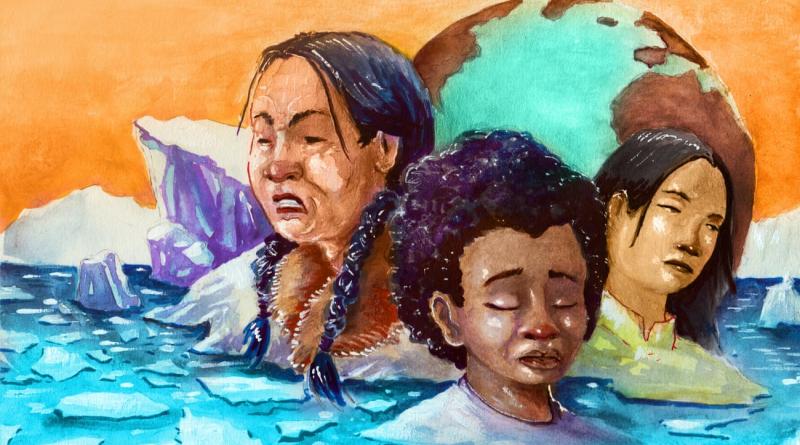 Solastalgia: ‘I am homesick for my home even though I am still here’ Illustration: Roy Boney/The Guardian

With snow just beginning to dust the hills surrounding the city of Iqaluit, the hunters scramble off in boats. They’re hunting Canada geese, as they have always done, only now using rifles and motorboats instead of the spears and kayaks of their ancestors.

Across Baffin Island, Inuit are harvesting before autumn begins to transition into winter. Later in the year, when the snows arrive in force and the fjords and harbours become thick with ice, the boats will be replaced by snowmobiles and the area will once again teem with human life.

But it is in the transitory periods between the seasons, known locally as the “shoulder” seasons, that the echoes of motors and the sounds of Inuktitut are least pronounced across this vast Arctic island. And these shoulder seasons are becoming increasingly unpredictable – something that concerns Neil Kigutaq.

The shoulder seasons have always been a problem: there isn’t enough ice to safely use a snowmobile yet too much ice in the water for boating. These seasons are worsening, however, and becoming more unpredictable as the climate warms. It can be difficult now to determine the safest route – and that has a worrying, if predictable, psychological result.

“With limited access to the land and water, you see a lot of people with a strong connection to our culture with effects of seasonal depression,” says Kigutaq, a climate researcher with the Qikiqtani Inuit Association. There are abrupt, wild, “aggressive” fluctuations in precipitation and temperature that are almost impossible to plan for.

“Everything could be green – and then you wake up to four inches of snow that doesn’t go away but before the ground or ice freezes,” he explains. “Or in the spring, we’re seeing -25 with the windchill and then within less than two weeks it’s suddenly zero and we see a massive influx of melting snow. Ponds and rivers get dangerous. You see standing water on top of the sea ice.”

Around the world, environmentally sensitive areas from Australia to the Amazon are being transformed by a warming climate. While climate change may be abstract in some places, here in the Arctic it is concrete, and becoming unsettlingly familiar.

The fear and grief associated with a rapidly changing environment has a name: solastalgia. It is best described as a sense of homesickness without ever leaving home, says Ashlee Cunsolo, the dean of arctic and subarctic studies at Memorial University in St John’s, where she has been working with Inuit to examine the mental, physical, spiritual and emotional impacts of the climate crisis.

“You don’t have to move to mourn the loss of your home: sometimes the environment changes so quickly around us that that mourning already exists.” Indigenous populations are suffering worst. In the Arctic, for example, the fluctuations in climate exacerbate existing social problems, including food security, overcrowded housing and struggles with mental health and addiction.

As climate change disrupts traditional access to the land and water, Inuit who once relied on hunting or fishing must instead pay for notoriously expensive and often low-quality food at the grocery store. The territory of Nunavut is also, like all of the Canadian Inuit homelands, experiencing a major housing shortage, sometimes with three or four generations all living under one roof.

Hunting, fishing and harvesting are also ways for Inuit to pass their culture, skills and values from one generation to the next. This transfer of knowledge is how Inuit have not only survived the Arctic, but thrived in it. Now they are worried the climate crisis is putting those skills in jeopardy.

“So we have this longing,” Kigutaq says. “Once you recognize the emotional state you are in, you feel this sense of loss.”

He says he misses the predictability of how things used to be, and is afraid that traditions like the annual caribou hunt may never be the same as in his youth. When the shoulder seasons are unruly, when the temperature dips and pitches wildly in a matter of days, Kigutaq says there is a sense of unease in the community: people are aware something is not right, but until they can name it and talk about it together, it remains a formless sadness. Cunsolo believes solastalgia could help give shape to that sadness.

The term solastalgia was coined by the philosopher Glenn Albrecht in 2005 to address feelings of shock in Australia after large open-cut coalmining in New South Wales had transformed the Upper Hunter Valley. People described the landscape they had once known so well as unrecognizable.

Though still relatively new, the term has been catching on with people living in environmentally sensitive areas, particularly vulnerable populations. It has not yet been recognised by the DSM or psychological associations, but there is a growing body of research. “People are expressing this deep pain,” says Cunsolo, “saying I am still living in place, but my home has changed so much, everything around me looks so different, it feels so different that I am homesick for my home even though I am still here.”

While solastalgia can apply to anyone experiencing climate-related grief, Cunsolo says Indigenous people are particularly vulnerable because of their deep connections to their homelands and their practical daily knowledge of the local area.

Kigutaq says he sees his work as a researcher as a duty, to give back to his people and the land. What’s more, he says, working with other Inuit to help preserve their way of life, and using traditional knowledge to enrich research, has helped him to face solastalgia in himself.

“The ability to use Inuit traditional skills passed down intergenerationally is how we have always adapted to a changing environment, and now it is helping us to do better research and monitoring,” says Kigutaq. “The work we do is an opportunity to feel pride in ourselves and our culture and to contribute to something.”

When the goose hunters return to Iqaluit, they will go door-to-door sharing their plump catch with friends and family to make sure everyone has food for the upcoming shoulder season. No one knows how intense or sudden the changes will be this year, but if Inuit are anything they are adaptable.

Kigutaq says that it is this adaptability in the face of the unknown that has made Inuit leaders in the fight against climate change, learning to recognize what is happening and to not feel paralyzed by solastalgia. Above all, he says, it is particularly necessary to realize you are not alone, and to find community with whom to face a changing future.

“[The term solastalgia] helps us to vocalize some of the feelings we are having,” Kigutaq says. “It can help create awareness and conversations – and the ability to connect with others who are experiencing the same thing.”