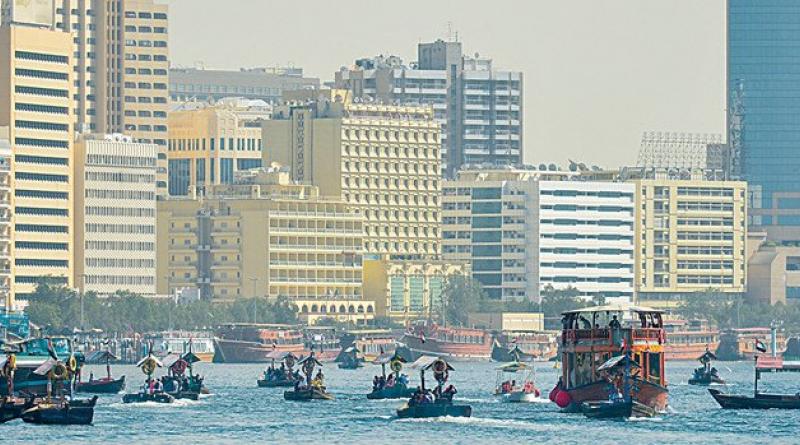 DUBAI: Want to take a trip to the future using eco-friendly transportation? In the UAE, you can enjoy a ride on a solar-powered abra on Dubai Creek, or hop on an electric bus in the capital.

While Abu Dhabi Sustainability Week is shining a light on big renewable energy projects, some more practical uses are already underway in the UAE, serving as a taster of the ground-breaking initiatives the Gulf is expected to witness as it moves toward a sustainable future.

It has 87 percent lower emissions than regular abras, with expected operations on Dubai Creek, Jumeirah Beach, the new islands and the Dubai Water Canal. A total of 61 boats are planned by 2020.

Back on the road, work is underway in Dubai on two solar-powered bus shelters as part of a trial for shelters in locations off the electric power grid.

The solar power generated will be used to operate lights, air-conditioners and billboards.

In Abu Dhabi, Masdar has launched the first electric passenger bus in the region. The Eco-Bus will serve a six-stop route between Marina Mall, Abu Dhabi Central Bus Station and Masdar City, with a free service until the end of March.

Seating 30 passengers, it has a range of 150 km per battery charge, with solar panels used to power its auxiliary systems.

With experts predicting that global solar installations will grow steadily in the coming years — by 5.2 percent annually between 2017 and 2022 — the combination of batteries, solar and other renewables is expected to cause a dramatic transformation in the world’s energy markets. Some of this is already trickling down to street level.

“Buses, taxis and other fleet vehicles are driven continuously, contributing more to urban pollution than vehicles of similar engine sizes,” said Stephen King, lecturer in media at Middlesex University Dubai and a UAE-based member of the Climate Reality Project, a non-profit organization involved in education and advocacy related to climate change.

“Providing electric options for these vehicles is a positive step in improving air quality, which is a key issue (in the Gulf).”

According to the Climate Reality Project, several studies show that electric vehicles are likely to cost the same as, or even less than, regular internal combustion vehicles within the next decade, even without incentives.

A February 2017 report from Bloomberg New Energy Finance (BNEF) found that the unsubsidized total cost of ownership of battery electric vehicles will fall below that of internal combustion engine vehicles by 2022.

From there, the report projected a steadily increasing rate of adoption, reaching global sales of 41 million — 25 percent of the total market share — by 2040.

“Solar is quite suitable for meeting small local loads without a grid connection, and electric buses are increasingly popular around the world because their running costs are low compared with internal combustion engines,” said Jenny Chase, head of solar at BNEF.

“Solar power can take on a role in mostly bulk energy generation in the daytime. Solar photovoltaics (PV) is now one of the lowest-cost generation options in sunny regions, with prices below $25 per megawatt (MW) in sunny areas, where political stability makes the cost of capital low.”

Chase said it is now possible to generate energy without significant carbon dioxide emissions, for close to — or even less than — the cost of generating from fossil fuels.

“This will be incredibly attractive to utilities and governments. The Middle East (is likely to) build solar power plants for a large chunk of its electricity demand increase in the future, at least until the daytime need is well met,” she said.

“Electric vehicles for public transport are also likely to be used increasingly, possibly lagging adoption in oil-rich countries where the fuel costs are less.”

China, for example, already has 400,000 e-buses. “Some batteries will probably be used for shifting demand to the daytime, and e-vehicles will be encouraged to charge in the daytime,” Chase said. “There will also be some rooftop solar adoption where government policy supports it.”

Last year, the Saudi Electricity Co. signed a deal with the Tokyo Electric Power Co., Nissan Motor Co. and Takaoka Toko Co. for the first electric vehicle pilot project in the Kingdom. As part of the agreement, fast-charger stations will charge vehicles in 30 minutes.

The potential is high. Experts in 2002 tipped that the global solar market would grow 1 GW annually by 2010. The actual growth in 2010 turned out to be 17 times that.

“The world installed a record 98 GW of solar PV capacity in 2017, far more than the net additions of any other technology — renewable, fossil fuel or nuclear,” King said.

“Although solar energy technologies have been around for decades, it is only in recent years that installations have really started to take off,” he said. “Falling costs, technological improvements, increased competition and government incentives have been key drivers of this growth.”

Global solar capacity is said to have surpassed 400 GW for the first time in 2017. Although countries such as China, Japan, Germany, the US and India have historically been the largest players, solar growth in coming years is expected to depend increasingly on middle-income countries and emerging markets.

“Clearly, what was once a niche technology is now firmly in the mainstream,” King said. “Solar has a lot of potential in the region and around the world, and a number of important projects have been initiated in recent years.”

The BNEF report also revealed that the global energy storage market is projected to double six times between 2016 and 2030, rising to 125-305 GW per hour.

“This is a similar trajectory to the remarkable expansion that the solar industry went through from 2000 to 2015, in which the share of PV as a percentage of total generation doubled seven times,” King said.

“Energy storage, both utility scale and behind the meter, will be a crucial source of flexibility throughout this period, and will be essential to integrating increasing levels of renewable energy.”

But when it comes to achieving six hours of full electricity production per day, challenges remain.

Kyle Weber, an associate at Evera, which aims to identify and address key sustainability gaps in the mobility sector, said: “It is a resource that requires a lot of understanding to utilize well.

“In the case of an electric bus, you need to store the energy between when it’s generated and when it’s utilized, which means more cost, complexity, and things that can go wrong.”

On buses, Evera is looking into charging batteries outside a vehicle slowly during the day, before swapping them in and out of the vehicle while it is being used.

“Solar is also great for things like process heat. Heat can be used to do all sorts of things from cooking to generating steam, and desalinating water to powering a pump or producing clean hydrogen,” Weber said.

The solar projects in the region

The Gulf is wholeheartedly adopting solar power to meet some of its energy needs. Several projects are underway across the region, including the UAE, where there are plans to increase power-generation capacity by around 21 GW, and where solar capacity is expected to contribute
26.1 percent of the total additional generation capacity.

According to the Climate Reality Project, the world’s largest concentrated solar plant is due to be completed by 2021 near Dubai and is expected to have a 1,000-MW capacity.

Dubai is home to the first utility-scale solar project in the Middle East. The UAE has 5.45 GW of new solar projects in development as of March 2017, and the Mohammed bin Rashid Al-Maktoum Solar Park is expected to be the largest concentrated solar plant in the world when it is completed in 2030.

Dubai aims to produce 75 percent of its energy from clean sources by 2050, and its target energy mix for 2030 consists of 25 percent solar.

The Moroccan Solar Energy Plan aims to install 2 GW of solar power by 2020. On completion, the concentrated solar power complex will generate more than 500 MW of renewable electricity for 1.1 million Moroccans by 2018, reducing carbon emissions by 760,00 tons annually.

By 2020, Egypt aims to develop 40 solar parks of around 50 MW to meet its 2-GW renewables target, with clean energy accounting for 20 percent of the country’s energy mix. Its first utility-scale solar plant, credited to the government-sponsored feed-in tariff, will generate power for up to 15,000 homes.