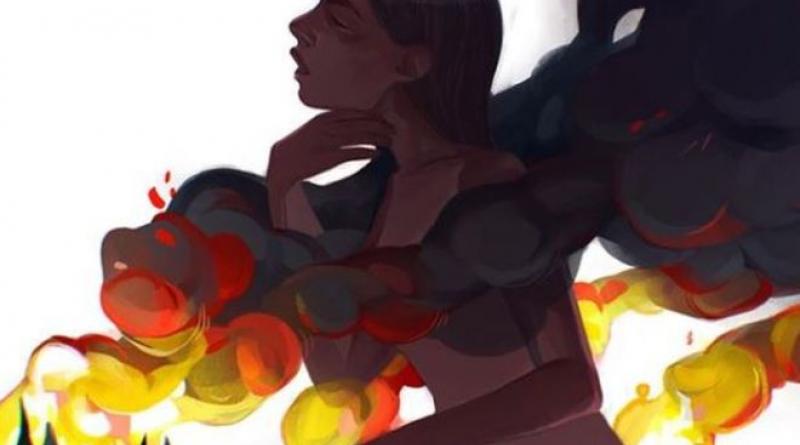 As wildfires continue to burn across Russia, artists in the country have taken to social media to share their feelings of powerlessness and call for urgent action to protect what is left of the forests.

About three million hectares (7.4 million acres) have been affected, with the smog now reaching across the border to Mongolia.

The hashtag "sibirgorit", which means "Siberia is burning", has now been used on 22,000 posts on Instagram while "Save Siberia Forests" has appeared on 2,500 posts on Twitter.

On Wednesday the army was ordered to help tackle the raging fires.

But conservationists believe authorities should have acted earlier and want them to acknowledge that more needs to be done to contain existing fires and prevent them spreading further.

They are using the hashtags to highlight their feelings of pain and disappointment.

Just under a million people have signed a petition calling for an "emergency situation" to be declared across the entire Siberia region, which would ensure more resources were invested in dealing with the blazes.

Many social media users are posting photos of themselves wearing surgical masks, like those being used by people in the affected regions to protect themselves from the smog.

Yulia Dukhova, who lives in Krasnoyarsk - where a state of emergency was declared,posted an image of herself wearing one such mask with the words 'dishi' (breathe) written on it as part of the movement to raise awareness.

"Siberia is burning, but we are hanging on. My series of photos, called Breathe, is dedicated to the burnt and broken heart of Siberia," she wrote.

He said: "The most important task is to prevent the fire from spreading to populated areas."

But the fires, caused by record high temperatures combined with lightning and strong winds, have been raging for weeks.

Illustrator Yekaterina Kucherenko posted an image of a woman in front of the burning forest and told her followers "I want to scream so loudly, but not sure where." 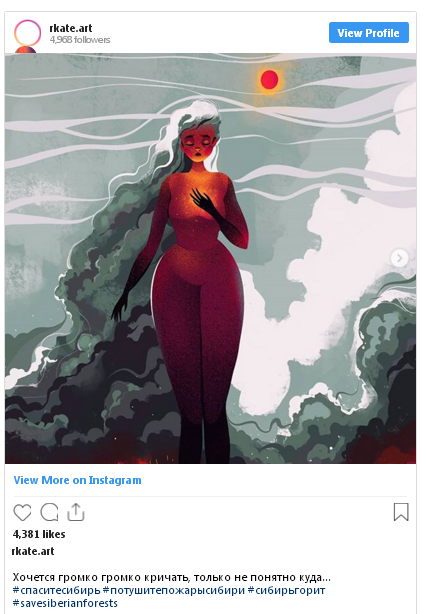 And artist Maria Rybina posted: "I am very sorry that the forests are burning at such a scale and that they were not put out in time, and now it's too late. [I am sorry] that people are suffering, animals are dying and I can't do anything about it.

A street artist from St Petersburg, who did not want to be identified, posted a photo of his artwork, on a burnt tree trunk.

"Economically unviable mother," the words read, with a picture of a woman, commonly used in Russia to represent the motherland.

The call to action was joined by many Russian celebrities and Instagram influencers.

Artist and Instagram blogger Yelena Sheidlina came up with the idea for a project dedicated to wildfires and deforestation a few days before returning to Russia from Tokyo.

"My news feed was literally exploding with messages about the increasing scale of the environmental catastrophe in Siberia and in the Far East," she told the BBC.

She got in touch with her artist friends in Japan (@s_h_u_r, @daisuke_shim, @amazing_jiro and @akihikoizuchi) and the night before her flight they completed the shoot. "Emotions were literally flooding through me," she said. 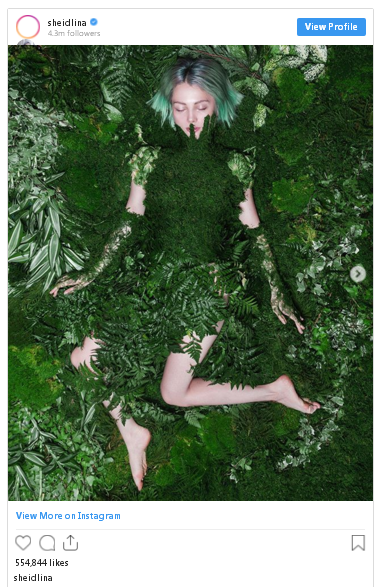 And US movie star and environmentalist Leonardo DiCaprio reposted a Guardian video of the fires which attracted a number of grateful comments from Russian users.

"Thank you for not being indifferent, Leo. We are burning from the fire and from shame for our government and our speechless selves," an Instagram user replied.

Wildfires Ravaging The Arctic Right Now Are So Intense, You Can See Them From Space

‘The devastation of human life is in view’: what a burning world tells us about climate change.