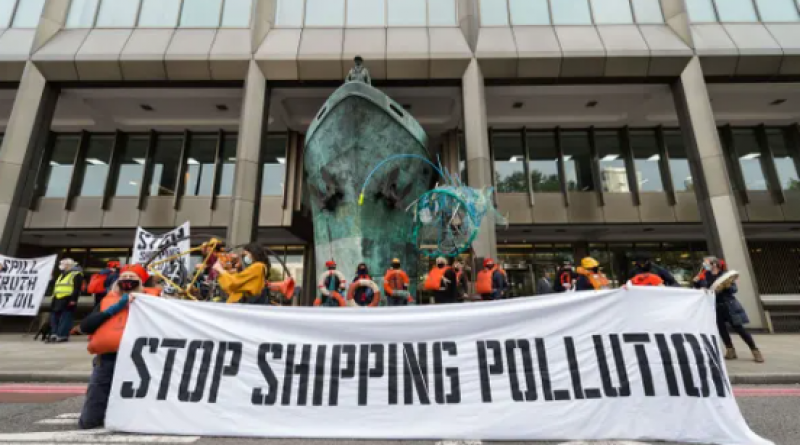 Shipping industry representatives, backed by several countries, have submitted a proposal to the UN to charge a climate-related levy on fossil fuels used by international shipping for the first time.

However, climate campaigners are concerned that the levy is too small, and will distract from more effective ways of reducing carbon dioxide from shipping, which is a growing problem.

The proposed levy, of $2 (£1.40) a tonne of fuel used by ships, would raise about $5bn over the next decade to fund research and development into zero-carbon ships. It was put forward on Wednesday to the International Maritime Organization (IMO), the UN body that governs global shipping, by the International Chamber of Shipping and several other industry representatives, and is backed by nine governments.

Guy Platten, the secretary general of the International Chamber of Shipping, said the levy would enable a “moonshot” by producing funds to build prototypes of ships or the infrastructure needed to supply low-carbon energy to ships. There are severe logistical difficulties with decarbonising shipping: an electric ship, for instance, would require the equivalent of 10,000 Tesla batteries a day to cross the Atlantic. Hydrogen is another proposed fuel, but Platten said on current estimates it would take 60% of the world’s renewable energy generation to produce enough hydrogen to power shipping.

“We want to demonstrate to wider society that shipping has a commitment to net zero [emissions],” Platten said. “This would provide significant funds to use to get to net zero as quickly as we possibly can.”

The nine countries, representing about 40% of global merchant shipping tonnage, that have signed up to sponsor the proposal at the IMO are Greece, Japan, Switzerland, Singapore, Malta, Nigeria, Liberia, Georgia and Palau.

Green experts said the proposal would distract attention from initiatives that would have much more impact on shipping emissions.

“Countries should not sign up to this,” said Aoife O’Leary, the director of the Environmental Defense Fund. “This is a very small measure, and it is too little too late. There are other better options, if [the shipping industry] want to be genuinely ambitious.”

She said several of the countries backing the proposals were “flag registries”, which make money by licensing vessels that are foreign-owned or run, and have a history of resisting regulation.

Faig Abbasov, the shipping director of Transport & Environment, said many shipping companies were already investing in research and development. He contrasted the plans with what he said were more effective proposals by the EU to bring shipping within its emissions trading scheme, and proposals to be submitted to the IMO for a global carbon levy on shipping.

“This levy is not big enough to change behaviour,” he said. “The industry is trying to use this as an excuse to derail efforts to include shipping in the EU emissions trading scheme. There are other genuine carbon pricing proposals that could be submitted to the IMO, but by trying to pre-empt those, the industry is reducing the bandwidth available at the IMO to focus on the other proposals.”

The IMO has spent more than a decade discussing ways of bringing down emissions, with little tangible result. In 2018, the UN agency adopted a target of reducing the emissions intensity of shipping by 40% compared with 2008 levels by 2030, and halving total emissions by 2050. However, there is so far no agreed way of achieving the target.

Shipping transports more than 80% of global trade and accounts for about 2.9% of global carbon emissions. The emissions are forecast to more than double by 2050 if measures are not put in place to cut carbon. Ships run on heavy oil that produces large quantities of carbon dioxide, and other pollutants such as sulphur.

The IMO will discuss ways of cutting greenhouse gas emissions from shipping at its next key meeting in June, and at a further meeting in London in November that coincides with vital UN climate talks, the Cop26 summit, in Glasgow. Discussions on reducing the climate impact of shipping were scheduled for last year in London, but had to be postponed because of the Covid-19 pandemic.