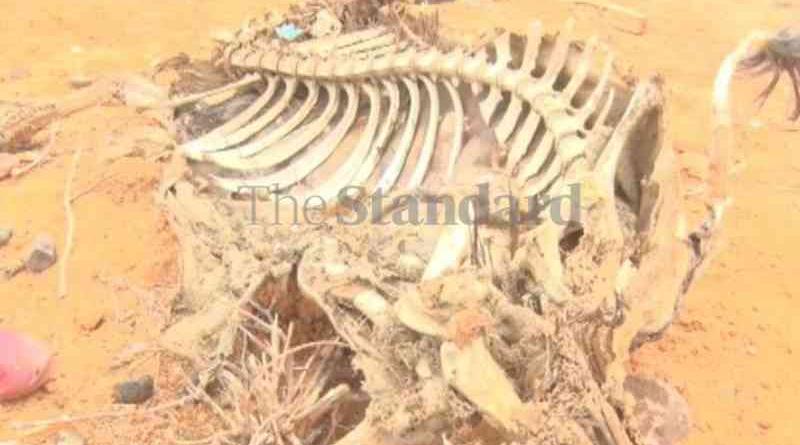 Barely one year after Sahara Noor completed her Kenya Certificate of Secondary Education (KCSE) at Khalalio Girls Secondary School, she stares at a bleak future after her parents were pushed into abject poverty by the ravaging drought.

Noor, 19, cannot enroll in any institution of higher learning since her KCSE result slip is being withheld at the school, owing to an outstanding fee balance.

She is among Form Four leavers in the vast Mandera county whose future is at risk as their education has been severely impacted by severe drought that has plagued the region for close to four years now.

“I was denied my result slip because I have an outstanding fees balance. It has been a year now and my parents cannot afford to clear it after the death of our livestock,” she says.

The North Eastern region has some of the lowest school enrollment and retention rates in Kenya, and students who have managed to complete their secondary education are struggling to advance to college and university.

Most pastoralist families in Mandera have lost their livestock as the country faces the worst drought in over 40 years. Out of the at least three million livestock which have died in the country, about 800,000 deaths alone are from Mandera county.

“Students whose parents are financially able have already joined colleges and universities, but there are so many of us who are still at home because of fee balances,” says Noor.

For instance, in her Bura Abor location, about 50 Form Four leavers are idling at home. The situation has a greater impact on girls than their male counterparts.

“My worry is that if my parents don’t clear my balance, I could be married off to an old man in the village. I am hopeful that I’ll get well-wishers to clear my balance so I can join college,” she adds.

Her tribulations resonate with those of 25-year-old AbdiFatah Hussein who scored C+ in the 2015 KCSE examination, but his dream to join university was also cut short due to poverty.

“I am farming along River Daua and the little proceeds are used up to purchase my sick mother’s medication. My parents are old and I am the breadwinner in our family,” says Hussein.

None of his pleas to the school principal to release his result slip has been heeded to. He has accumulated a balance of Sh34,000 but with the current situation at home, his family’s basic needs supersede his desire to advance his education.

“So many children in this location have cleared secondary school but they are still at home due to lack of fees. There is no financial help coming apart from the occasional food donations,” says Abdi Rashid Adawa, a resident of Bura Abor.

Pastoralism supports the livelihoods of majority of the population in the region, but that has been affected by the adverse impacts of climate change.

According to a report by the National Drought Management Authority (NDMA), cumulative figures of livestock deaths throughout the entire drought phase include 139,065 cattle, 36,580 camels, 24,151 donkeys and 559,072 shoats.

“Livestock are dying in large numbers and communities are saying cattle might soon be wiped out of Mandera County. There are many deaths in the rangelands that have not been reported. The remaining five million livestock in Mandera are also on the verge of death,” reads the report by NDMA in part.

The report further indicates that Mandera East is experiencing an extreme vegetation deficit, while Mandera West, North and Banisa, Mandera Central, Kutulo, and Lafey sub-counties are on severe vegetation deficit for the month of March 2022.

As a result, children are suffering the blunt impact of the drought with their education progression being severely threatened.

“Funding from non-state actors was drastically reduced immediately Kenya was declared a middle-income country. We have limited resources to deal with a catastrophe of this magnitude,” said Roba.

“A long-term sustainable intervention programme requires deliberate policies and resource allocation to ensure we position ourselves as a country such that drought ceases to be an emergency in this region,” he added.

“The economy of Mandera relies on pastoralism and the loss of animals has strained people. About 439,000 people are in dire need of food,” said Kyatha.

The commissioner noted that the national government is supporting about 27,739 households through the cash transfer program and a large population receiving help from non-government organisations.

“The major challenge is in regard to animals because we have not been receiving adequate feed for the livestock. This has a bearing in regard to our security because of inter-clan conflicts triggered by diminishing pasture in Mandera North and El Wak areas,” said Kyatha.

Even with the biting drought, cultural barriers prevent locals from selling their livestock because of the long-standing value attached to animals.

Local leaders now suggest exploration of alternative sources of livelihood to enable the pastoral communities cope with drought. Already, residents in some parts of the county, particularly along River Daua, have embraced agriculture and farmers are planting a variety of fruits and crops including watermelons, mangoes, onions and tomatoes.