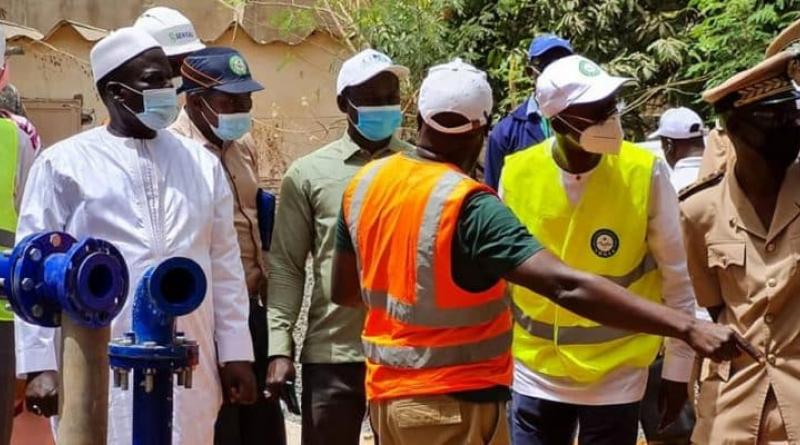 The National Water Company of Senegal (SONES) is connecting 13 villages in the rural community of Notto Diobass to the new Keur Momar Sarr drinking water plant (KMS 3). The connection work was financed through a World Bank loan.

In the Thiès region of Senegal, 13 villages now have access to drinking water. These include Thiéo, Kissane, Sangue, Péléo, Dioungane, Sessène, Ngagathie and Mbomboye, located in the rural community of Notto Diobass. The new drinking water supply systems were put into service on Friday 8 July 2022 by the National Water Company of Senegal (SONES). This was in the presence of several personalities, including Serigne Mbaye Thiam, Senegalese Minister of Water and Sanitation and his counterpart Alioune Sarr, in charge of Tourism and Air Transport.

The new drinking water supply facilities equipped with standpipes will put an end to the water crisis that the rural community of Notto Diobass has been experiencing for the past ten years. These drinking water supply systems are connected to the third drinking water plant of Keur Momar Sarr (KMS 3), which was commissioned a year ago in Louga, 250 km from the Senegalese capital Dakar.

Built by the French giant Suez, the KMS3 plant has a capacity of 200,000 m3 per day. The plant treats water from Lake Guiers. Located in the Senegal River delta, it is a freshwater lake, the largest in the country, covering an area of 170 km3. The installation of a third drinking water plant in Keur Momar Sarr was intended to cover, by 2025, the drinking and industrial water needs of the regions of Louga, Thiès and Dakar, with particular emphasis on the localities bordering the Guiers Lake pipeline.

It is within this framework that the rural community of Notto Diobass has benefited from new drinking water supply infrastructures. “The government has asked SONES to make this investment, which has enabled several villages to benefit from quality and quantity of water,” said Minister Serigne Mbaye Thiam.

“Nearly 35,000 people are affected by this new water supply system in which SONES has invested 250 million CFA francs (more than 380,000 euros),” explained the Minister of Water and Sanitation. The State of Senegal financed the new infrastructure thanks to a loan of 248 million CFA francs granted by the World Bank.