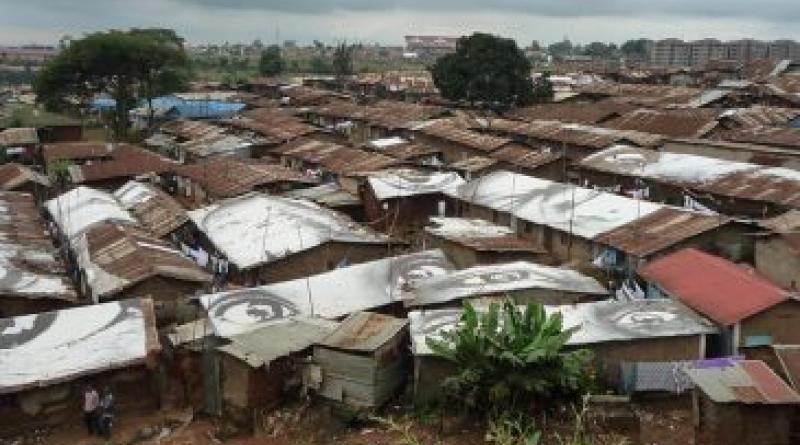 As more and more people live in settlements that are particularly vulnerable to extreme weather, one initiative in Kenya and Tanzania aims to mitigate the danger by working closely with communities.

Across the world, urban areas are growing at an exponential rate. Natural population growth and huge numbers of people migrating from rural communities to towns and cities are putting tremendous pressure on urban spaces. Incoming populations often have little alternative other than to settle in informal settlements that are very likely unplanned and lack basic services and city infrastructure.

Many of these communities, however, are in low-lying areas or next to rivers. This makes them extremely vulnerable to flooding, which can destroy homes and assets or even endanger life. Climate change means the threat is likely to increase, as some countries see more intense rainfall and longer periods of heat and drought.

DARAJA is an innovative project that aims to increase the climate resilience of residents of two at-risk informal settlements in East Africa. The project works in Nairobi, the capital city of Kenya, which has one of the world’s largest such settlements, and Dar Es Salaam, one of Tanzania’s largest cities. The project is co-ordinated by Resurgence, a social enterprise. “DARAJA is a Swahili word meaning bridge,” explains Sunayana Sen, Project Manager at Resurgence. “We want to create a bridge between the national
meteorological agencies in these countries and the people who use the information and services they provide.”

The information and advice that DARAJA aims to provide is urgently needed in both communities. Kenya and Tanzania both have two rainy seasons. The longer one runs from March to May, with heavier rains, while the shorter season runs between October and December When severe weather hits an informal settlement during either of these periods, the results are often damaging and can be devastating. By making sure that forecasts are readily available and by educating people on how to prepare for heavy rain and flooding, the project aims to protect communities and save lives.

DARAJA started by canvassing the needs of people living in both cities. Through a series of workshops, people were asked how they accessed weather information and what type of services they’d like to see in the future.

“Our partners did the implementation on the ground, getting people together for the workshops and leading discussions,” explains Ms Sen. “We also mapped out how information flowed through the informal settlements.”

The channels that most people in the settlements use to keep up to date are TV and radio. In Nairobi there is higher mobile internet penetration, with many people using mobile phones for communication.

Getting the message across

By pinpointing the most effective ways to get a message across, the weather agencies could then ‘piggy-back’ onto these channels to spread weather forecasts and advice on what to do in an extreme weather event. “We aimed to take the channels that already existed and use them, rather than creating something new altogether,” says Ms Sen.

Across both communities, people were keen to have weather information relayed by radio. Social media was also very important in Nairobi, where a higher percentage of people had access to the internet and end users were more comfortable with social media such as WhatsApp and Facebook.

DARAJA began piloting weather programmes on local and city-wide radio and using existing media channels to spread the word. For example, weather forecasts and related information were posted on the Facebook pages of the radio stations. “That also enabled the audience to engage with us, sending back questions or comments,” says Ms Sen. Another example is the SMS and WhatsApp communication system. Within the local community, weather forecasts with locally relevant impact information are shared via SMS and WhatsApp.

Children are the educators

Another interesting finding during the scoping sessions was the powerful influence of children, especially in Dar es Salaam. People in the community explained that schools were an effective way to spread information to families via children in the region.

Messages about sanitation and washing hands had already been spread throughout the community using schools as the starting point. So DARAJA started using this channel too, training school teachers to help them understand weather forecasts and know how to pass this knowledge on. Pupils who were members of school environmental clubs also received training in how to spread the word amongst their peers, so that their families could take action.This channel seems to have been particularly effective.

Teachers in Dar es Salaam noticed that there were fewer students absent during 2019’s long rainy season. Not only that, there was less damage to school books, as children were letting their families know that valuables should be kept on shelves high above any potential floodwater. One teacher engaged in the DARAJA teacher training programme commented that “DARAJA has enabled me to share the weather information during the April/May 2019 rain season with my students at Keko Machungwa primary school. This time the case was different; precautions were taken much earlier.”

DARAJA is now gathering formal feedback to measure the impact that these messaging initiatives have had so far across communities. “There are certain small things you can do that can go a long way,” explains Ms Sen. “Another example is keeping drains free of blockages so that rainwater doesn’t build up and flood habitations.

To publicise the benefits of clearing drains in light of forecasts by Kenya Meteorological Department of a heavy month of rains, DARAJA recently held a community event in Kibera where approximately 150 community members joined forces to clean up riverbeds and prevent flooding.

Earlier in the year, Cyclone Kenneth made landfall on the borders of Tanzania. Although the cyclone didn’t affect Dar es Salaam directly, it led to higher rainfall. “At that time our partners were saying that there was a lot of communication and activity on the DARAJA local stakeholders’ WhatsApp group,” says Ms Sen. “People were sharing tips on protective action that can be taken and sharing the latest Tanzania Meteorological Agency forecasts, and it’s likely that economic damage was avoided to some extent.”

Recognised by the Global Resilience Partnership

DARAJA has recently won an award from the Global Resilience Partnership (GRP). After assessing over 300 projects, GRP picked out 16 winners who were demonstrating innovative approaches to helping communities become more resilient. The Award shows just how much of a difference the life-changing – and potentially life-saving – work of DARAJA can make.

DARAJA is a project under the Weather and Climate Information Services for Africa (WISER) programme, funded by the UK’s Department for International Development (DFID) and run by the Met Office, that is transforming weather services across East Africa. DARAJA is also supported by Climate-KIC (Knowledge and Innovation Community). DARAJA is led in Nairobi and Dar es Salaam by community development organisations, Kounkuey Design Initiative (KDI) and Centre for Community Initiatives (CCI), and by the two national meteorological agencies of Kenya and Tanzania, the Kenya Meteorological Department (KMD) and the Tanzania Meteorological Agency (TMA).

How These 3 African Women Scientists Are Fighting To Save Humanity.

Scientists turn to tech to prevent second wave of locusts in east Africa.

Solar energy, the Barefoot College and Enel in Africa.