Researchers rethink life in a cold climate after Antarctic find. 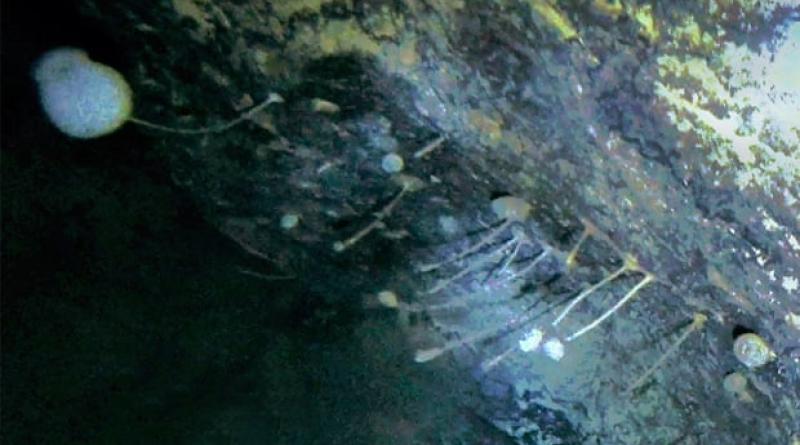 Scientists surprised by marine organisms on boulder on sea floor beneath 900 metres of ice shelf.

The accidental discovery of marine organisms on a boulder on the sea floor beneath 900 metres (3,000ft) of Antarctic ice shelf has led scientists to rethink the limits of life on Earth.

Researchers stumbled on the life-bearing rock after sinking a borehole through nearly a kilometre of the Filchner-Ronne ice shelf on the south-eastern Weddell Sea to obtain a sediment core from the seabed.

While the boulder scuppered their chances of obtaining the core, footage from a video camera sent down the hole captured the first images of organisms stuck to a rock far beneath an ice shelf.

“It’s slightly bonkers,” said Dr Huw Griffiths, a marine biogeographer at the British Antarctic Survey. “Never in a million years would we have thought about looking for this kind of life, because we didn’t think it would be there.”

Ice shelves form when frozen water from the continent’s interior flows to the coast and floats on to the surrounding sea. As the ice flows over the land, it can pick up boulders that become embedded in the base of the ice shelf before dropping out on to the sea floor.

While surveys of Antarctic marine life have found some small mobile organisms – such as fish, worms, jellyfish and krill – far beneath ice shelves, they have never previously found stationary filter-feeders, which survive by ingesting food that falls down on them. Their absence led many scientists to suspect that the total darkness, the lack of food and the -2C temperature was too hostile for them.

Photos and video footage of the boulder show that it is home to at least two types of sponge, one of which has a long stem that opens into a head. But other organisms, which could be tube worms or stalked barnacles, also appear to be growing on the rock. Details on the discovery have been published in Frontiers in Marine Science.

The isolated boulder community lies 500 metres under the base of the ice shelf and 160 miles (260km) from the nearest open water. Because of the strong currents in the area, the food they ingest – perhaps dead plankton – is thought to be carried between 370 and 930 miles before reaching them.

“This is by far the furthest under an ice shelf that we’ve seen any of these filter-feeding animals,” said Griffiths. “These things are stuck on a rock and only get fed if something comes floating along.

“It was a real shock to find them there, a really good shock, but we can’t do DNA tests, we can’t work out what they’ve been eating, or how old they are. We don’t even know if they are new species, but they’re definitely living in a place where we wouldn’t expect them to be living,” he said.

Climate change is making marine species migrate towards the poles faster than those on land.

The Methuselah tree and the secrets of Earth’s oldest organisms