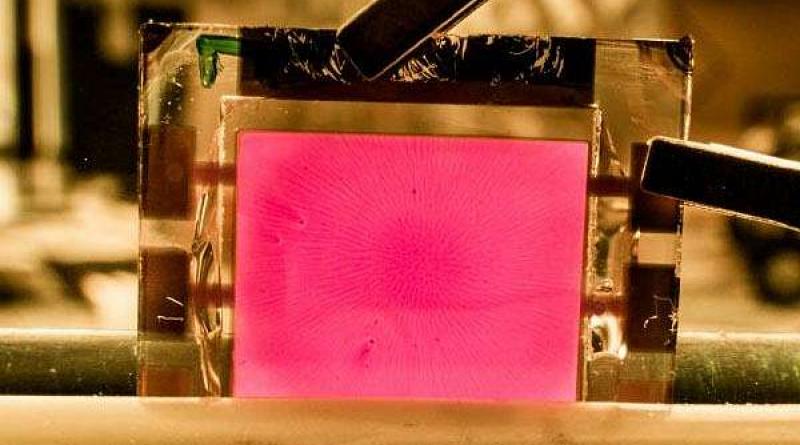 Efficient near-infrared (NIR) light-emitting diodes of perovskite have been produced in a laboratory at Linkoping University. The external quantum efficiency is 21.6%, which is a record. The results have been published in Nature Photonics. The work is led by LiU scientist Feng Gao, in close collaboration with colleagues in China, Italy, Singapore and Switzerland.

Perovskites are a group of materials defined by their crystal structure, and have been the focus of intense research interest during the past 10 years, initially for solar cells and recently also for light emitting diodes.

They have good light-emitting properties and are easy to manufacture. The external quantum efficiency (the ratio of charge carriers emitted as light over all of those fed into the materials) of light-emitting diodes based on perovskites has until now been limited by defects that arise in the material during manufacture. The defects act as traps for the charge carriers and thus cause energy losses.

One way of dealing with defects is to add materials known as "passiviation molecules", which bind to the atoms that cause defects. The researchers had previously discovered a molecule with amino groups at its ends that gave a certain improvement in properties. However, when they selected a molecule that also contained oxygen atoms, the effect increased dramatically.

"We now understand that it is the hydrogen bonds between passivation molecules and perovskite materials that cause problems. This allowed us to search for a molecule that was perfect for passivation", says Feng Gao, senior lecturer in the Division of Biomolecular and Organic Electronics at Linkoping University.

The molecule they found has two amino groups at its ends, with oxygen atoms at suitable distances between them. Oxygen atoms reduce the hydrogen bonding ability of amino groups, and hence increase the probability that they interact with defects. The number of traps for charge carriers in the perovskite is significantly reduced, allowing the charge carriers to recombine and emit light efficiently.

The external quantum efficiency is a record-high 21.6%.