A Quarter of Bangladesh Is Flooded. Millions Have Lost Everything. 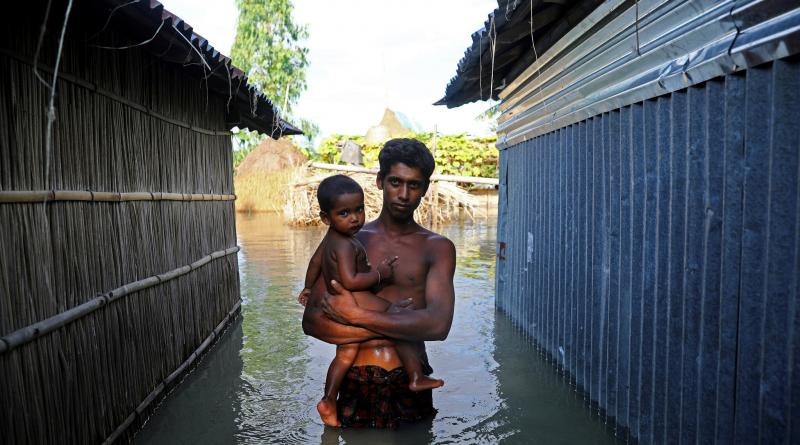 The country’s latest calamity illustrates a striking inequity of our time: The people least responsible for climate change are among those most hurt by its consequences.

Torrential rains have submerged at least a quarter of Bangladesh, washing away the few things that count as assets for some of the world’s poorest people — their goats and chickens, houses of mud and tin, sacks of rice stored for the lean season.

It is the latest calamity to strike the delta nation of 165 million people. Only two months ago, a cyclone pummeled the country’s southwest. Along the coast, a rising sea has swallowed entire villages. And while it’s too soon to ascertain what role climate change has played in these latest floods, Bangladesh is already witnessing a pattern of more severe and more frequent river flooding than in the past along the mighty Brahmaputra River, scientists say, and that is projected to worsen in the years ahead as climate change intensifies the rains.

“The suffering will go up,” said Sajedul Hasan, the humanitarian director of BRAC, an international development organization based in Bangladesh that is distributing food, cash and liquid soap to displaced people.

This is one of the most striking inequities of the modern era. Those who are least responsible for polluting Earth’s atmosphere are among those most hurt by its consequences. The average American is responsible for 33 times more planet-warming carbon dioxide than the average Bangladeshi.

This chasm has bedeviled diplomacy for a generation, and it is once again in stark relief as the coronavirus pandemic upends the global economy and threatens to push the world’s most vulnerable people deeper into ruin.

An estimated 24 to 37 percent of the country’s landmass is submerged, according to government estimates and satellite data By Tuesday, according to the most recent figures available, nearly a million homes were inundated and 4.7 million people were affected. At least 54 have died, most of them children.

The current floods, which are a result of intense rains upstream on the Brahmaputra, could last through the middle of August. Until then, Taijul Islam, a 30-year-old sharecropper whose house has washed away, will have to camp out in a makeshift bamboo shelter on slightly higher ground. At least he was able to salvage the tin sheet that was once the roof of his house. Without it, he said, his extended family of nine would be exposed to the elements.

Mr. Islam’s predicament is multiplied by the millions among those on the front lines of climate change. Vanuatu is literally sinking into the Pacific. Pastoralists in the Horn of Africa are being pushed to the edge of survival by back-to-back droughts. In the megacity of Mumbai, the rains come in terrifying cloudbursts.

The inequity is striking, no matter which way you slice it. One recent analysis found that the world’s richest 10 percent are responsible for up to 40 percent of global environmental damage, including climate change, while the poorest 10 percent account for less than 5 percent. Another estimated that warming had reduced incomes in the world’s poorest countries by between 17 percent and 30 percent.

Poor countries have long sought a kind of reparations for what they call loss and damage from climate change. Rich countries, led by the United States and European Union, have resisted, mainly out of concern that they could be saddled with liability claims for climate damage.

It doesn’t help that the rich world has failed to deliver on a $100 billion aid package to help poor countries cope, promised as part of the 2015 Paris accord.

Coronavirus recovery plans have lately begun to open the door to new discussions about debt relief linked to climate resilience.

In June, the Alliance of Small Island Developing States, led by Belize, pressed for what it called a new compact with private and bilateral creditors “to deliver debt relief and increase resilience financing.”

Caribbean countries, with their economies ravaged by hurricanes in recent years, now find themselves falling deeper into debt as the pandemic dries up tourism revenues. A study commissioned by the United Nations found that the 20 most climate-vulnerable countries have paid more than $40 billion in additional interest payments because of losses stemming from extreme weather events.

In Bangladesh, the flooding of the Brahmaputra reflects the unequal pain of extreme weather.

The floods began in June. In most cases, heavy rains upstream in neighboring India swelled the river basins that flow through Bangladesh before draining into the Bay of Bengal. Those who live along the Brahmaputra are no strangers to flooding. When the river swells, work stops, land erodes, people move to higher ground and wait for the waters to recede. They rely on their savings or aid to feed themselves.

This year was different, though. By the time the river flooded, in June, people were already running out of food, said Mr. Hasan of BRAC.

Because of the lockdown, working people had all but stopped working. Remittances from relatives abroad, many of them newly unemployed, had dried up. In the countryside, people had begun to sell their goats and cattle at bargain prices. They had no food to eat.

When the river first swelled, Taijul Islam, the sharecropper from the Kurigram district in the country’s north, rushed to save his livestock — cattle, goats, chickens, ducks. A few, he rescued. Many, he lost. The river took away the small vegetable garden next to his house, then his house, where he had stashed roughly 1,300 pounds of rice. Then it washed away a small shop that he ran when he wasn’t working on other people’s land. Also the school that his 6-year-old son attended in the village. 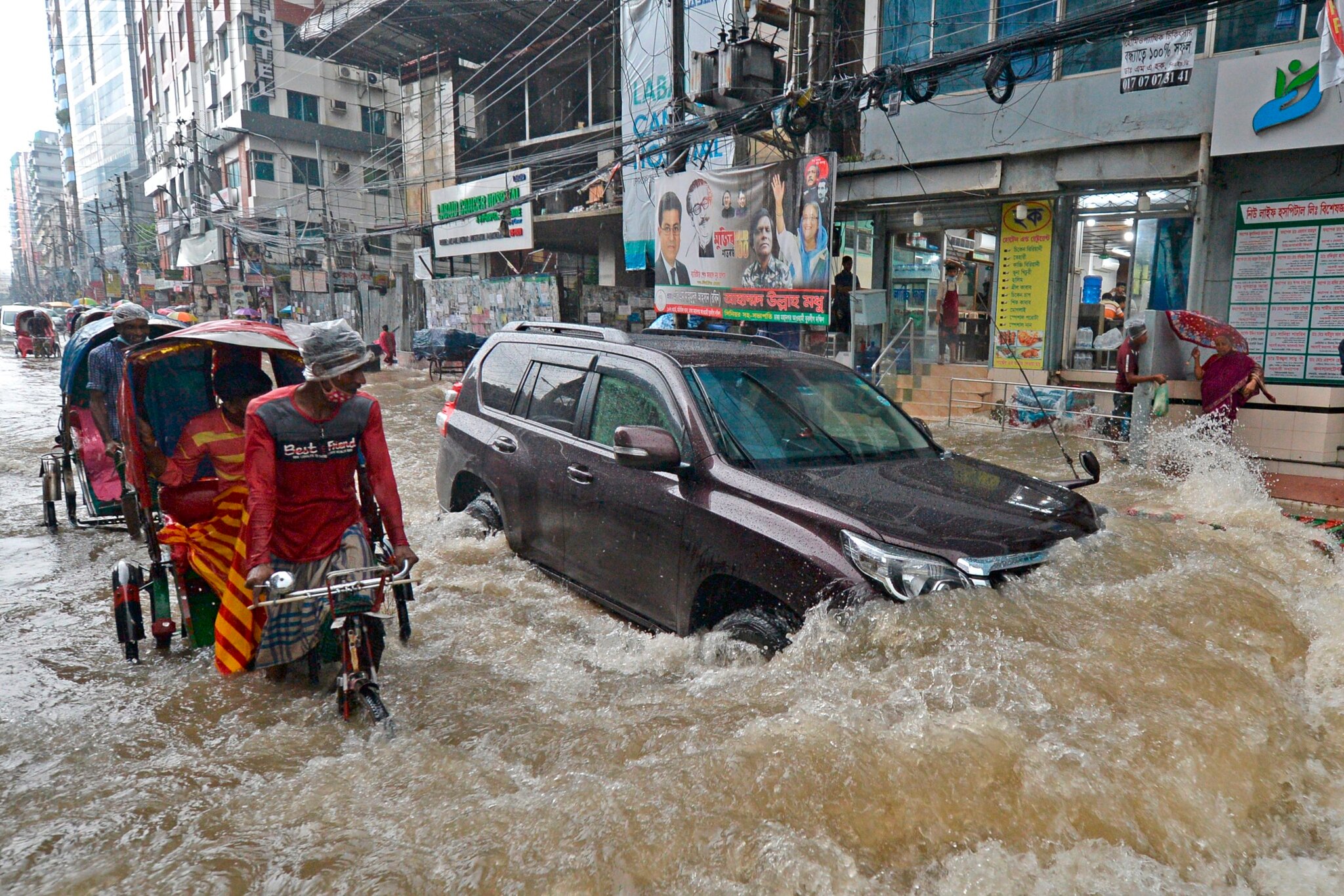 Dhaka, the Bangladeshi capital, in late July. The damage from this year’s flooding has been compounded by the global coronavirus pandemic.Credit...Munir Uz Zaman/Agence France-Presse — Getty Images

All he can think of now is where he can go to earn a living. He is the sole breadwinner of his extended family. All nine of them had been living on rice, boiled potato and lentils. Vegetables are unaffordable, let alone fish or meat, which, he said, “are now unimaginable.”

Akkas Ali, 48, had already been through a bad flood. He moved to Mr. Islam’s village six years ago, when his old village washed into the Brahmaputra. Two weeks ago, as the river rose, breaking through its embankments, his four acres of farmland went underwater. The village mosque and market washed away. So, too, a secondary school where more than 250 children were enrolled. Mr. Ali worried where they would go to school now, if at all.

His house still stood this week, but the river, which had been a quarter mile away, had rushed dangerously close. He was sure it, too, would wash away soon.

The Brahmaputra is a fearsome, shape-shifting 2,400-mile river that erupts from the Tibetan Himalayas and spills into northeastern India before merging with the Ganges in Bangladesh and emptying into the Bay of Bengal. It irrigates vast areas of farmland but it’s also unpredictable, often swallowing the islands that form within it, like the one where Mr. Ali’s village once stood.

Climate change, too, is altering its fate — and that of the people who live along its banks. The rains are more unpredictable and the river is rising above dangerous levels far more frequently than it did before, according to 35 years of flooding data analyzed by A.K.M. Saiful Islam, a water management expert at the Bangladesh University of Engineering and Technology in Dhaka.

No matter what, Dr. Islam said, the country will have to adapt. That requires money to dredge rivers, maintain embankments, improve drainage and offer aid to those who are repeatedly displaced and impoverished.

Advocates for the poor say Bangladesh’s predicament with disasters illustrates exactly why climate negotiations, postponed until 2021, need to deliver compensation for people who have not caused the problem.

“People are losing whatever little they have,” said Farah Kabir, the Bangladesh country director for ActionAid International. “When and how are they going to be supported? When is the global community going to take responsibility?”