Power outages across the Plains: 4 questions answered about weather-driven blackouts. 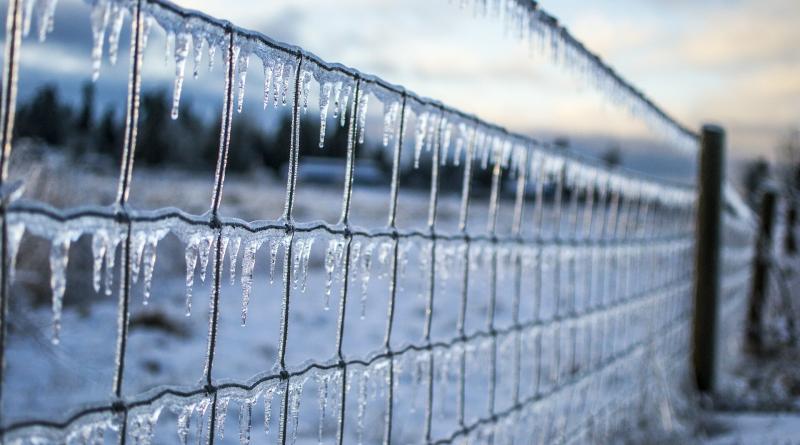 1. The Plains states have a lot of wild weather. Why is this cold wave such a problem for utilities?

The central U.S. has freezes, heat waves, windstorms, droughts and floods. All of these events stress the electric grid, pipeline networks, roads, rail and waterways. Right now in my state of Texas, ERCOT, a nonprofit corporation that manages the power grid for most of the state, is imposing rolling blackouts because demand for electric heating is very high. So is the Southwest Power Pool, which serves customers in 14 states from North Dakota to Oklahoma.

About 60% of homes in Texas have electric heat, and most of the rest use natural gas or propane. Normally our peak electric demand is on summer afternoons for air conditioning. But in this sustained cold, electric demand is spiking to keep homes comfortable and pipes from freezing. This storm is more extreme than the most severe winter conditions that ERCOT typically plans for.

At this time of year, power plants that run on coal or natural gas often shut down for planned maintenance ahead of the summer cooling season. That means we have less capacity available than usual right now.

To meet the difference between high demand and low capacity, utilities are cycling power on and off to different neighborhoods or regions of Texas in a methodical way to keep things in balance. If they didn’t do this, there would be a risk of a much wider-scale blackout, which would be catastrophic and life-threatening.

2. How do utilities plan for this kind of extreme weather?

Thermal power plants – which burn coal, natural gas or biomass – also need a lot of water for cooling to run efficiently, as do nuclear power plants. If climate change warms rivers or reduces their water levels, it could force those power plants to turn off or reduce their output.

Weather forecasting has improved as satellites become more abundant and computer models become more sophisticated. Utilities can take steps in advance of a major storm, such as asking customers to preheat their homes. For ratepayers who will do this, the utility may adjust their thermostats to reduce power flow when demand is high.

Power providers can also ask large industrial customers to temporarily shut down factories to reduce electricity demand. And they can give hourly or minute-by-minute updates to customers about rolling blackouts and provide real-time maps of power outages. 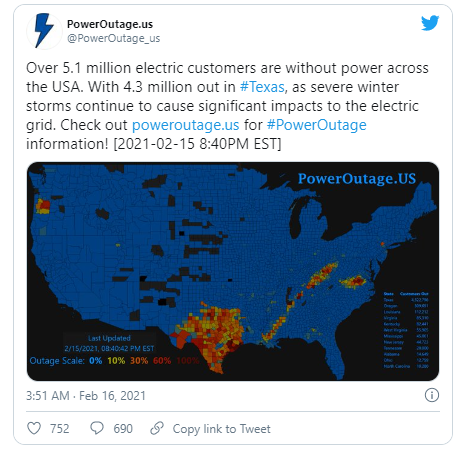 Utilities work year-round to harden the grid against extreme weather. They may build berms to protect power plants against floods, fill reservoirs in preparation for droughts, replace equipment that can get overheated in the summer or weatherize power plants for cold conditions.

Almost exactly a decade ago, in February 2011, Texas suffered a significant series of rolling blackouts when cold weather forced dozens of coal and natural gas power plants offline. This cold snap is testing the upgrades utilities made after that event.

3. Does having a diverse fuel mix protect against energy crunches?

Texas is blessed with multiple energy sources. Much of it is produced locally, including natural gas, wind and solar power. Over the past 15 years, the state has diversified its fuel mix: Coal use has dropped, wind and solar have grown, and nuclear and natural gas use have held steady.

Each of these options has pros and cons. Wind and solar do not require water cooling, so they work fine during droughts and floods. But they vary based on wind patterns, cloud cover and time of day.

Nuclear power is reliable, but sometimes nuclear plants have to reduce their output during heat waves or droughts if their cooling water is too hot or scarce.

Natural gas is a high performer, but in the 2011 Texas cold snap, gas plants struggled to keep up with demand because many homes and businesses were using the fuel for heat. That reduced the pressure in gas pipelines, which made it hard to physically move gas to turbines that needed the fuel to generate electricity.

Much of the coal burned in Texas power plants comes from Wyoming over a sprawling rail network that can be disrupted if a bridge or section of track is out of commission for repairs. Utilities store 30 days or more of coal in piles near their power plants, but those piles can freeze or be flooded, as occurred when Hurricane Harvey swamped Houston in 2017.

Because all of these options fail in different ways, a diverse mix is the best basis for a robust system. Today Texas has three times as much wind power-generating capacity as it did in 2011, which may help stave off the worst risks of a statewide blackout. 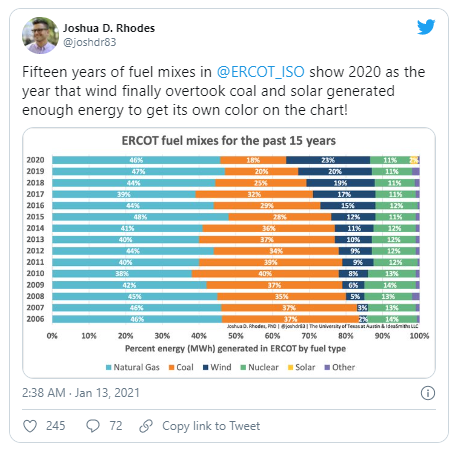 This extra wind will be especially important because about 30% of ERCOT’s generating capacity is offline right now, reportedly due to natural gas shortages. Some West Texas wind turbines have also shut down due to icing, but turbines in other parts of the state are partially offsetting those losses. ERCOT will investigate all power losses after this storm passes and use what it learns to make new improvements to its system.

4. California has had rolling blackouts recently, too. Is this a national risk?

California is a big state with power sources in many locations, so it relies on a sprawling network of wires and poles to move electrons from one place to another. Those power lines can sag when it’s hot out and fail when high winds blow trees down onto the wires.

Aging transmission and distribution networks can also spark wildfires, which is a growing risk as the effects of climate change worsen drought conditions in the West. To manage those risks, California grid operators will preemptively turn off the power to prevent wildfires. They also did this in August 2020 to ration power during a heat wave.

Weather-related power outages are increasing across the U.S. as climate change produces more extreme storms and temperature swings. States that design their buildings and infrastructure for hot weather may need to plan for more big chills, and cold-weather states can expect more heat waves. As conditions in Texas show, there’s no time to waste in getting more weather-ready.