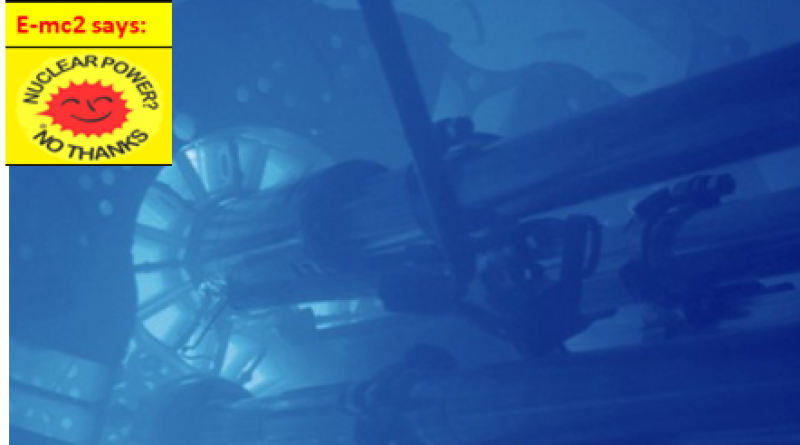 And the dirty secret to why it isn’t used

Nuclear energy has a bad name these days. Whilst it can provide us with carbon-neutral energy the toxic byproducts and potential risk each reactor poses aren’t so eco-friendly. We already have 250,000 tonnes of nuclear waste stored away that will remain deathly radioactive for another 10,000 years, and the Chernobyl and Fukushima catastrophes are stark reminders of the devastation wreaked on the environment and us, when things go wrong. This has caused many to turn to nuclear fusion as a cleaner alternative. However, replicating the Sun on Earth is rather tricky, so viable fusion reactor technology is likely decades or even centuries away. So should we give up on nuclear energy? Maybe not, as uranium has a cleaner, safer cousin, thorium.

When I say cousin, I mean that literally. Thorium is one across from uranium on the periodic table, so it shares many of uranium’s unique abilities, except without some of the drawbacks.

If I were to give you a lump of uranium ore used in today’s nuclear reactors you would soon die from the radiation. If the piece was large enough and included some neutron reflectors it could even go critical, killing you with a sudden burst of radiation. But what does this mean?

Uranium 235 (U235) is the isotope of uranium we want in our reactors (a type of uranium with 235 neutrons). This makes up around 4% of the uranium ore. The rest is uranium 238 (U238) as it is difficult to isolate the two elements.

U235 is radioactive, with a reasonably long half-life of 700 million years, but this isn’t where the bulk of its radiation comes from. There are countless neutrons floating about the place as part of background radiation. Normally this isn’t a problem, but U235 can also absorb one of these neutrons. This causes it to turn into an energetic U236, which is highly unstable, splitting into krypton 92 (Kr92), barium 141 (Ba141) and three neutrons. The krypton and barium are radioactive and decay away into other byproducts, but the three free neutrons do something extraordinary. If there is enough U235 around, or there are neutron reflectors around the ore, these free neutrons are absorbed by more U235, causing them to decay. So you can go from one U235 splitting to three more being set off, which in turn triggers nine more to split and so on, increasing exponentially

This runaway cascade releases a biblical amount of energy as the bonds holding the U235 together are broken, realising the energy that was holding the atom together. This is a nuclear chain reaction, also known as fission.

If the progression of the neutrons is controlled, you can have a slow and steady reaction, which is what powers our nuclear power stations. But, if the reaction is left to run wild (known as going critical), it can release deadly amounts of radiation or even power some of the largest bombs ever made.

When U235 goes through this chain reaction you are left with caesium 137 (Cs137), cobalt 60 (Co60) and iridium 192 (Ir 192). These elements are still radioactive, but they are relatively manageable and have other uses, such as food irradiation and radiotherapy.

But only 3%-5% of our ore is U235. The rest is uranium 238 (U238), which doesn’t go through the chain reaction. Instead, when U238 absorbs a neutron, it decays into neptunium 239 (Np239) and plutonium 239 (Pu 239). These are poisonous and remain highly radioactive for tens-of-thousands of years. This is the truly deadly part of our vast pile of nuclear waste. To make things worse, neptunium can spontaneously catch fire at room temperature, sending high radioactive ash into the air.

So let’s recap uranium. You can’t handle it directly as it is too radioactive and it can fission all by itself. This means mishaps can cause it to go critical (look at Chernobyl) and the byproducts remain deadly with dangerous levels of radiation for tens-of-thousands of years. It doesn’t sound too good, does it?

Well, thorium could be a much better alternative.

Thorium is four times more common on Earth than uranium and almost all of it is the isotope thorium 232 (Th232). You could hold a lump of Th232 in your hands without any ill effects as the element is barely radioactive with a half-life of 14 billion years. It also can’t fission by itself. So how can it power a nuclear reactor?

Like U235, U233 can fission, that is, have a nuclear chain reaction. U233 absorbs a neutron, turning it into uranium 234 (U234). This is highly unstable and splits quickly, releasing energy and two neutrons that can be absorbed by yet more U233.

The byproducts of U233 decay are less radioactive and decay away quicker than the byproducts of U235. Plus, we started with nearly pure Th232. As we don’t have any U238, there is no plutonium or neptunium as waste products. There is also far less waste for each kilowatt of energy produced as thorium ore is much more pure than uranium ore.

All this means that the waste from a thorium reactor is only radioactive for 500 years rather than 10,000 years, with significantly less waste than our uranium reactors.

What’s more, as thorium can’t go critical by itself, it is nearly impossible for a thorium reactor to have a major incident like Chernobyl or Fukushima. These reactors are inherently nuclear accident-proof, at least to a point.

So, you’d expect thorium reactors to be everywhere, wouldn’t you? Sadly that isn’t the case.

You see, thorium reactors don’t produce any plutonium. Not only is plutonium one of the most deadly parts of nuclear waste, but it is also an essential ingredient for making nuclear bombs.

So if a country wants to keep a stockpile of nuclear warheads, they need lots and lots of nuclear power stations to supply them with plutonium. There simply isn’t space for them to develop thorium reactors. So you won’t find a single operational thorium reactor in the USA, Europe or Russia. These countries once had them but they have all been decommissioned. Instead, they are now filled with uranium reactors, pumping out thousands of tonnes of deadly waste and even more fatal byproducts.

But, one country has decided to double down on thorium, India. They have no aspiration to increase their nuclear weapon stock pile, but they need a clean and reliable energy source to power their billion-strong population as they become a developed nation. The country has almost no uranium deposits, and typical renewables aren’t reliable enough to produce enough energy, but they have vast thorium deposits. So they now have all of the worlds functioning thorium reactors and plan to build more.

So still think nuclear power is dirty? Uranium has driven wars, caused catastrophes and generated a vast pile of deadly waste that won’t go anywhere for an awfully long time. While thorium isn’t perfect, it is by far a safer, more efficient alternative with nuclear waste that is far more manageable. It seems the only thing holding back this revolutionary tech from being widespread is our need for nuclear weapons.

Is it time to sever ties with our military nuclear dependency and usher in a new age of atomic energy? Or, without a nuclear deterrent, would this only lead the way to World War III? It’s a huge geopolitical and ecological debate that cuts to the very heart of our existence whether that be our national security, nuclear waste or disaster. Food for thought.

Nuclear power euphoria in Indonesia is all smoke and mirrors with no current technical, financial or market viability