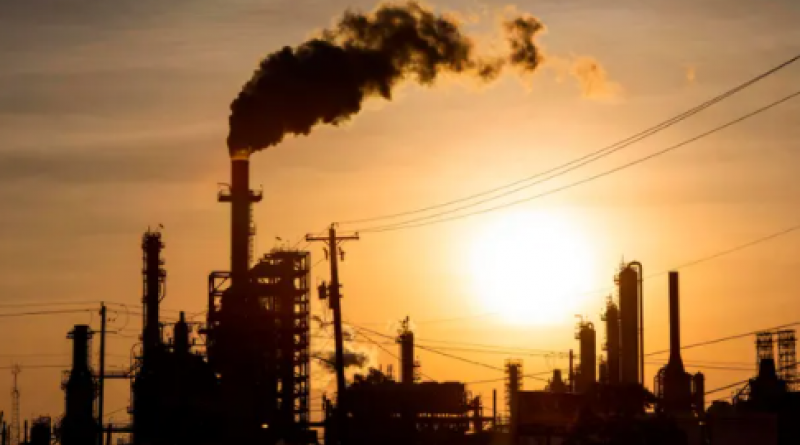 The oil industry knew at least 50 years ago that air pollution from burning fossil fuels posed serious risks to human health, only to spend decades aggressively lobbying against clean air regulations, a trove of internal documents seen by the Guardian reveal.

The documents, which include internal memos and reports, show the industry was long aware that it created large amounts of air pollution, that pollutants could lodge deep in the lungs and be “real villains in health effects”, and even that its own workers may be experiencing birth defects among their children.

But these concerns did little to stop oil and gas companies, and their proxies, spreading doubt about the growing body of science linking the burning of fossil fuels to an array of health problems that kill millions of people around the world each year. Echoing the fossil-fuel industry’s history of undermining of climate science, oil and gas interests released a torrent of material aimed at raising uncertainty over the harm caused by air pollution and used this to deter US lawmakers from placing further limits on pollutants.

“The response from fossil-fuel interests has been from the same playbook – first they know, then they scheme, then they deny and then they delay,” said Geoffrey Supran, a researcher at Harvard University who has studied the history of fossil-fuel companies and climate change. “They’ve fallen back on delay, subtle forms of propaganda and the undermining of regulation.”

The effects of burning large amounts of coal, oil and gas from factories, cars and other sources has long been evident, with major cities in the US and Europe sometimes shrouded in smog before the advance of modern clean-air laws.

However, a mass of historical documents from the 1960s onwards from corporate archives at libraries in the US and Canada, scientific journals and paperwork released in legal cases shows the oil industry began to grasp the damage to health caused by the burning of fossil fuels.

In internal memos and reports, Imperial Oil, an Exxon subsidiary, acknowledged in 1967 the petroleum industry was a “major contributor to many of the key forms of pollution” and took surveys of “mothers who worried about possible smog effects”.

In an internal technical report in 1968, Shell went further, warning that air pollution “may, in extreme situations, be deleterious to health” and acknowledging the oil industry “reluctantly” must accept that cars “are by far the greatest sources of air pollution”. The report states that sulphur dioxide, given off by the burning of oil, can cause “difficulty in breathing” while nitrogen dioxide, also given off by vehicles and power plants, can cause lung damage and that “there will be a clamor to reduce [nitrogen dioxide] emissions, probably based on suspected long-term chronic effects”.

Small particles given off by fossil fuels, meanwhile, are the “real villains in health effects”, the Shell report admits, as they can bring toxins, including carcinogens, “deep into the lungs which would otherwise be removed in the throat.”

These microscopic specks of soot and liquid, known as particulate matter, are expelled when fuels are burned and inhaled by people. In 1971, Esso, a forerunner to Exxon, sampled particles in New York City and found, for the first time, the air was rife with tiny fragments of aluminium, magnesium and other metals. Esso scientists noted that gases from industrial smokestacks were “hot, dirty and contain high concentrations of pollutants” and suggested further testing was needed for symptoms including “eye irritation, excess coughing, or bronchial effects”.

By 1980, Imperial Oil had outlined plans to investigate incidences of cancers and “birth defects among industry worker offspring”. Esso experts, meanwhile, raised the “possibility for improved particulate control” in new vehicle designs to reduce the emission of harmful pollution. 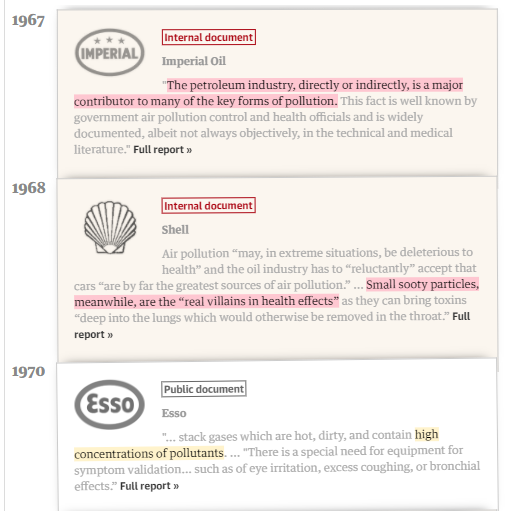 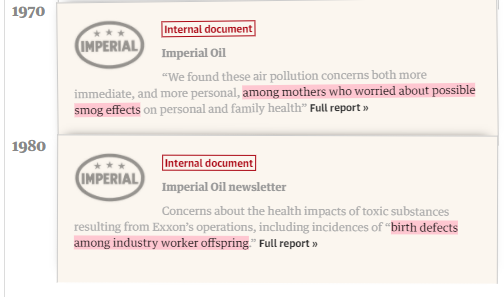 Ten years later, an internal Exxon report stated: “We have become more aware of the potential impacts our operations might have on safety and health.” By this point, independent scientists in academia were amassing their own evidence of the influence of air pollution.

“The body is set up to keep particles out but these very small, fine particles are good at picking up toxins, bypassing your defenses and getting a free ride down into the lungs,” said George Thurston, an environmental health expert at New York University who co-authored a landmark 1987 study that found the smaller particles were far more deadly than larger fragments that could be coughed out.

Thurston and others have established fumes from car exhausts or power plants produce far more toxic particles than from other sources, such as wood burning or dust. “I don’t recommend breathing in wood smoke, but it’s far less toxic than fossil-fuel combustion particles, given the same concentrations,” Thurston said.

Following a further major report in 1993, known as the Harvard “six cities” study, which found air pollution was spurring deaths from heart disease and lung cancer, pressure began to mount on the US Environmental Protection Agency to set pollution limits for the smallest particles, known as PM2.5 as they measure less than 2.5 micrometers across, or about a 30th of the diameter of a human hair.

Faced with the prospect of federal government regulation, the fossil-fuel industry swung into action. “The health issue is increasing in importance,” noted the minutes of a meeting of the Global Climate Coalition, which was a business lobby group, in 1997. “The GCC has got to be prepared to respond to the issue this year.”

A scientist commissioned by the American Petroleum Institute (API), a US oil and gas industry group, promptly told a congressional hearing in 1997 the link between air pollution and mortality was “weak”, before Exxon pushed out its own study claiming “there is no substantive basis” for believing PM2.5 was causing more deaths. 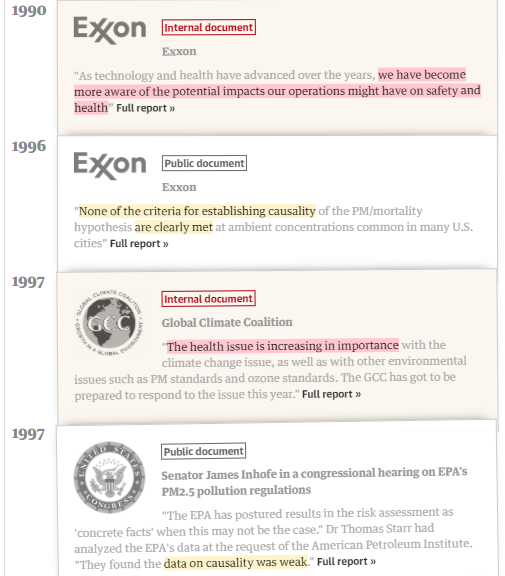 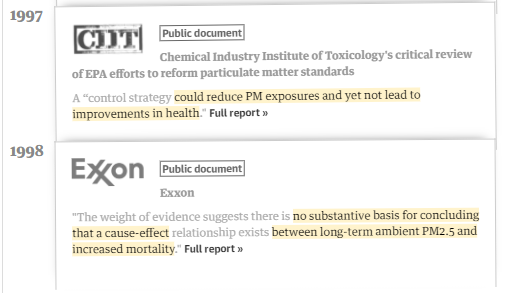 This undermining of air-pollution science is likened by some researchers to efforts by tobacco companies to muddy the connection between cigarette smoking and cancer.

“The fossil-fuel industry was sowing uncertainty to maintain business as usual, and in all likelihood they were collaborating with other groups, such as the tobacco industry,” said Carroll Muffett, chief executive of the Center for International Environmental Law.

“When you look at these historical documents in context it becomes clear that the oil and gas industry has a playbook they’ve used again and again for an array of pollutants. They used it around climate change but absolutely we are seeing it around PM2.5 as well. It’s the same pattern.”

The EPA did, however, impose the first standards for PM2.5 emissions in 1997 and scientists have since uncovered more on air pollution’s assault on the human body. Once in the bloodstream, particles can cause dangerous inflammation and degrade the immune system, affect women’s fertility, heighten the risk of stroke, heart attacks, Alzheimer’s and pneumonia, and even damage people’s eyesight.

In a major finding last month, a team of US and UK researchers calculated that nearly one in five of all deaths worldwide each year is due to particulate pollution, a stunning death toll that is greater than that caused by HIV/Aids, malaria and tuberculosis combined. About 350,000 of these deaths occur annually in America. While overall air pollution trends have improved in recent decades in the US, pockets of stubborn pollution remain, often concentrated in poorer communities, among people of color and those living in the rust belt. 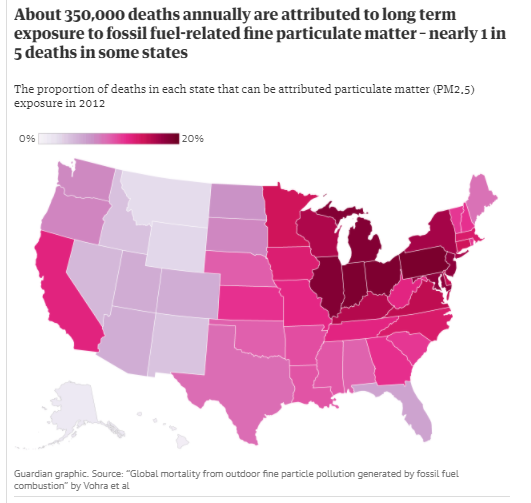 “There is now very consistent and solid evidence across many countries of the link between fine particulate matter and harm to health,” said Francesca Dominici, a professor of biostatistics at Harvard. “There is also a ton of evidence that lots of people are dying in the US from exposures even below the current limits. This pollution is very harmful and stricter regulation is needed.”

Knowledge of the health impact of air pollutants was “relatively thin” in the 1970s and some skepticism over the link was understandable for a while, according to Arden Pope, an air pollution expert at Brigham Young University who said he got a “lot of pushback” from industry over his work, which includes the six cities study. “But the evidence has grown dramatically and, boy, it’s just hard to deny now,” he said. It’s overwhelming.”

Undeterred, oil and gas interests have sought to stymie tighter standards on air pollution while mobilizing an effort to cast doubt over this science. A gathering called by the Heartland Institute, a conservative thinktank, in 2006 on clean-air rules helped set the tone – two speakers were from Exxon and the title of one session was “Uncertainty of NAAQS (National Ambient Air Quality Standards) Health Science”.

Industry-funded consultants published studies disputing the link between emissions and deteriorating health or simply disparaged the work of other researchers. “Their goal is to undermine the scientific method, science itself,” said Thurston. 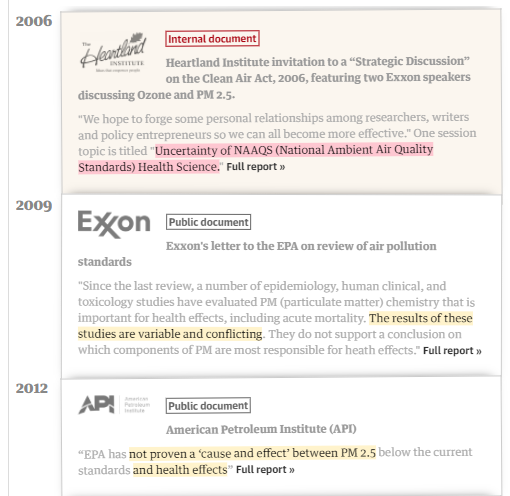 Even as the major oil companies publicly accepted the reality of climate change and vowed to address it, they have continued to dismiss the mounting evidence of harm caused by direct air pollution. Exxon has told the EPA that estimating a risk of death from particulate matter is “unreliable and misleading” while, in 2017, API demanded the agency relax standards around nitrogen dioxide – a pollutant linked to asthma in children and higher mortality in adults from heart disease and cancer – claiming there was no proven association with harm and existing rules were “more stringent than necessary”.

“We’ve seen the oil and gas industry’s disinformation campaign come full circle with the renewed attacks on research that tells us what we’ve known for decades – air pollution kills,” said Kert Davies, director of Climate Investigations Center, which uncovered some of the historical documents.

The industry’s approach bore fruit during Donald Trump’s administration, when senior executives from Exxon, Chevron, Occidental Petroleum and API met the then US president in the White House. A cavalcade of clean air regulations were scaled back, such as rules to limit pollution from cars and trucks, while a so-called “transparency” rule for science risked invalidating studies based on confidential medical data, which is vital for bedrock air pollution research. 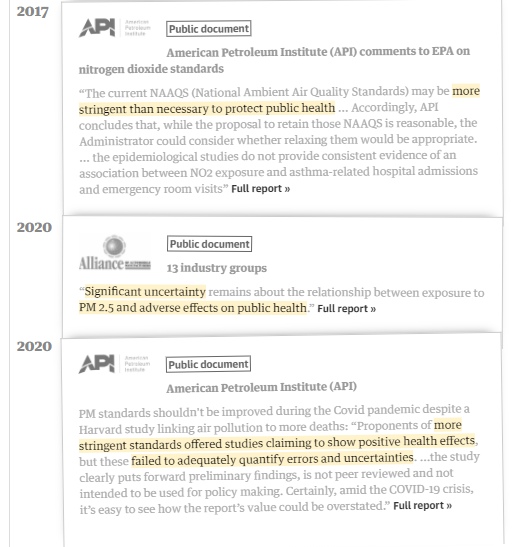 Under Trump, Tony Cox, a researcher who received funding from API and allowed the lobby group to copy-edit his findings, was named as chairman of a key EPA clean air advisory board. Cox, whose previous work has questioned the harm caused by particulates, accused EPA experts of bad science and subjectivity when they found that particles can be deadly even in low concentrations.

Last year, in the midst of an historic pandemic of respiratory disease, Trump’s EPA decided to not strengthen standards around fine soot particles. A Harvard study found that air pollution was associated with worse outcomes for people with Covid-19. API said the Harvard paper merely included “preliminary findings” that had provoked “scare headlines and erroneous media reports”.

The attacks on the Harvard research were “very hard and very stressful”, according to Dominici, one of the paper’s authors. “If you’re breathing pollution for a long time and get Covid you will have worse consequences. This is very unsurprising,” said the researcher, who has since established there are now more than 60 studies from around the world that associate air pollution with poor Covid outcomes.

“I was surprised there was such a ferocious criticism. It’s really unfortunate that it’s easier to discredit science than produce good science. Gosh, that’s so frustrating.”

In a statement, Bethany Aronhalt, spokeswoman for API, said: “Our industry’s top priority is advancing public health and safety while delivering affordable, reliable and cleaner energy.

“Largely due to increased use of natural gas in the power sector and cleaner motor fuels, the US has seen significant environmental progress over the years – including improved air quality – with annual concentrations of PM2.5 declining 43% since 2000.”