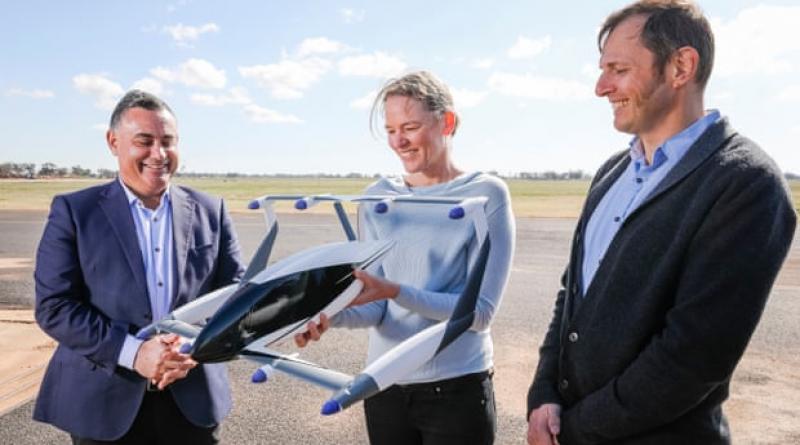 Testing facility for zero-emissions four-passenger electric aircraft expected to be built in Narromine within the year.

The New South Wales government has awarded almost $1m from a regional grants fund to a company developing what deputy premier John Barilaro describes as an electric flying car.

Andrew Moore, the chief executive of start-up AMSL Aero, says the company is building what is better described as an electric aircraft that takes off and lands like a helicopter but travels with the efficiency and speed of a plane.

The project, which has been in development for a few years, has been granted $950,000 to establish a testing facility and conduct flight tests in the NSW central west region of Narromine.

Moore, an aeronautical engineer, said the company’s aim was to produce a zero emissions aircraft that provides a new method of transport to connect regional and urban communities without a carbon footprint.

Few details about the aircraft itself are available. A prototype is under construction which Moore said would be unveiled in a couple of months.

The prototype relies on battery storage but Moore said the aircraft was designed to integrate a hydrogen fuel cell “when that technology reaches full maturity”.

It will be the size of an average family car – carrying four passengers plus a pilot – and will take off and land on a helipad-sized landing site.

Moore said it was intended to be low cost and would initially travel distances equivalent to a Sydney to Canberra journey. Future versions would be capable of distances in the order of a Sydney to Melbourne trip, or greater.

“We’ve targeted an extremely efficient design that will lead to a more affordable and environmentally friendly transport option,” Moore said.

“We know that the regions pay a lot more for air travel than some of the big urban centres, so part of this is about enabling those regions to be better connected.”

The model in development would have a pilot on board, but future models would include automation.

“This sort of technology is perfectly suited to an Uber Elevate application as well,” Moore said.

Barilaro announced AMSL Aero would receive $950,000 from the government’s regional investment attraction fund, which was set up to encourage investment and jobs in regional NSW.

The grant is for construction of a testing site at Narromine airport, where the company will conduct developmental test flights and, later, certification flight testing, with a goal of achieving certification at the end of 2023.

Barilaro said the technology had the potential to overcome the tyranny of distance many regional communities experienced, meaning people could travel to jobs, or visit family in remote locations, “and deliver tourists to hard-to-reach outback havens”.

“Imagine the convenience of having a flying car land in your suburb when you need to travel to a regional destination that is not serviced by an airport,” he said.

“It sounds like science fiction but the reality is a future where this is possible, practical and affordable is not that far away and I am proud that our investment attraction grant will help the development of this new technology and support jobs in regional NSW.”

The testing facility will be built in the next six to 12 months.

How Innovation Is Driving the Blue Economy.