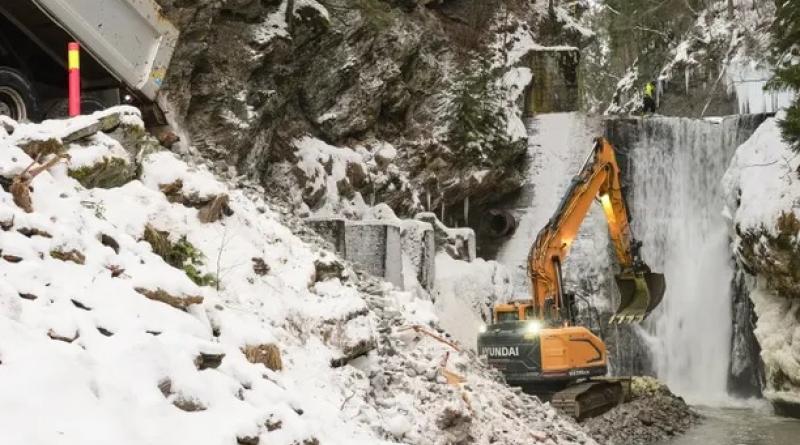 A dam that has blocked the Tromsa River in Norway for more than 100 years was blown up with dynamite this week, freeing migratory routes for fish.

Built in 1916, the seven-metre high dam in the small town of Fåvang, in Innlandet, east Norway, has not been in use for more than 50 years. The Tromsa is a tributary of the Lågen River, which feeds into Lake Mjøsa, Norway’s biggest lake. Campaigners say removing the dam will help fish in the area thrive again, including grayling, burbot, Alpine bullhead and common minnows. It is hoped the main beneficiary will be the lake-dwelling trout, which can weigh more than 10kg and feeds in downstream lakes and the Lågen. Until now, the fish have only been able to live and spawn in the lower 950 metres before the dam, whereas they will soon be able to swim 10km upriver.

“A few years ago, I watched the DamNation documentary and that inspired me to try to remove dams that aren’t in use any more,” said Solbakken. “Fish barriers, hydropower dams, roadbuilding and the way we secure rivers against flooding are all big problems for big brown trout and other fish. It is important to take care of all the small rivers. If we do that, we can have a positive future for our area.”

The dam’s destruction is part of a trend to remove the obsolete barriers that litter Europe’s waterways. In October, the Open Rivers Programme, a €42.5m project to provide grants to support the removal of small dams and the restoration of river flow across Europe, was launched with the backing of the charitable fund Arcadia. Last month, the European Commission released a guide for member states to identify barriers that could be removed to help achieve the goal of restoring 25,000km of rivers to free-flowing by 2030.

It is estimated that there are at least 1.2 million instream barriers in Europe and that they are a factor in the massive drop in the number of migratory freshwater fish across the continent, with numbers declining by more than 90% between 1970 and 2016.

“Free-flowing rivers underpin a wealth of biodiversity,” Wanningen said. “They also provide food for hundreds of millions of people, as these rivers are full of life and fish. Free-flowing rivers deliver rich sediments, which are crucial to agriculture and also mitigate the impact of floods and droughts. There’s so much potential for free-flowing rivers in Europe.”

“Norway is a major hydropower country. Removing dams here isn’t normal,” said Solbakken. “But it’s not controversial if you’re removing old dams that are not in use, in rivers protected by regulations against new hydropower.”

The campaign by Solbakken and the 120 members of the fishing club resulted in the government agreeing to foot the bill of 3.4m kroner (£290,000) to remove the dam.

On Wednesday, the small team drilled five holes deep into the dam then packed 20kg of dynamite into each one. Blowing up dams is unusual in Europe but was judged to be the safest method in this case. “As planned, the dam cracked in the middle and top,” said Solbakken. “The next step is to use the excavator. It’s a massive dam and it will take days to remove it all. There’s still plenty of work to do.”

The team will then set about restoring the river directly ahead of the dam site. “The Tromsa dam is in a steep canyon, so our challenge is to build up a nature-like step-pool cascade to enable the fish to swim upstream in the strong current,” said Ulrich Pulg, a fish biologist and river restorations expert. “This project will have several one-metre steps. It will look like white-water rapids during floods but big lake-dwelling trout will make it.”

Other dams are earmarked for removal across Europe in 2022, including in Spain, France and the UK. “More and more river managers and NGOs are picking up their tools for excavations,” said Wanningen. “Just a couple of months ago, three dams in Montenegro and one in Slovakia went down for the first time in the history of these countries. The European research project, Amber, which we participated in, has shown there are about 150,000 dams and weirs in Europe that have no function any more and can be taken out without any problem.

“Rivers are the veins of the Earth. We need to treat them with care.”

cover photo: Campaigners say removing the seven-metre dam, in Fåvang, Norway, which has not been used in 50 years, will help fish thrive. Photograph: Rob Kleinjans

Can Hydropower Deliver Enough Energy to Turn On the World?