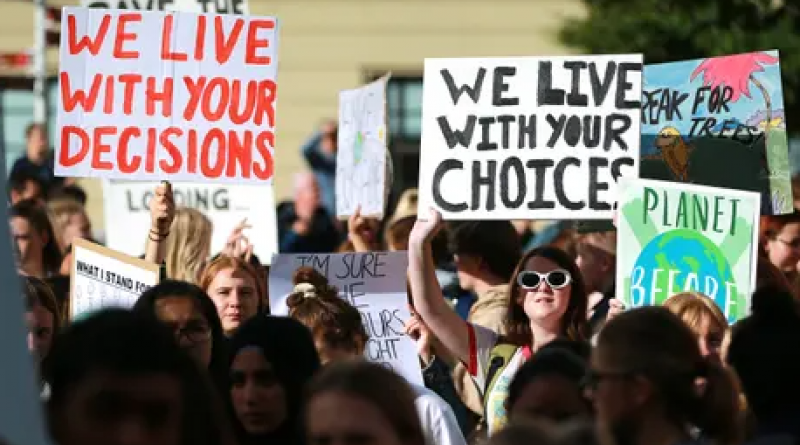 A group of law students have filed a lawsuit at Wellington’s high court against New Zealand’s minister of energy over her decision to grant two new onshore oil and gas exploration permits just six months after the government declared a climate emergency.

“Aotearoa New Zealand’s current approach to climate action is embarrassing,” said Phoebe Nikolaou, a member of the Students for Climate Solutions group. “I might be the claimant today as a law student, but I’ll be the lawyer soon, and this will be my life’s work … Keep fossil fuels in the ground.”

The students claim Megan Woods’ June decision to issue exploration permits in the Taranaki area is inconsistent with the government’s legal obligations under the country’s Zero Carbon Act and the Paris agreement and that she failed to consider key facts like the Intergovernmental Panel on Climate Change’s recent warnings about climate change’s severity.

When asked about the lawsuit, Woods said, “As the matter is before the courts it would be inappropriate for me to comment, but these decisions should come as no surprise as they were announced in 2018 as part of our world-leading ban on new offshore oil and gas exploration.” She did not rule out granting further permits in future.

This is the second major judicial review related to climate policy in Aotearoa this year; the advocacy group Lawyers for Climate Action have also sought judicial review of the Climate Change Commission’s official advice to the government. They argue the advice is inconsistent with the Paris agreement’s target of limiting global warming to 1.5C.

In 2018 the government banned new offshore exploration for oil and gas reserves and in 2020 it declared New Zealand was facing a climate emergency. However it has allowed energy companies to continue to apply for permits for onshore oil and gas exploration.

Earlier this year, Woods indicated that further onshore exploration permits could be granted in 2022 as well, which would allow oil and gas exploration up until 2032. The oil and gas industry has historically been a mainstay of the economy in the Taranaki region, where the June permits were granted; many in the area worry about the short-term economic consequences of shifting away from fossil fuels without significant government support.

Climate experts have called for a halt to the development of new oil and gas fields. The International Energy Agency, one of the world’s leading climate bodies, recommended in May that to limit global warming to 1.5C no new oil and gas fields, coalmines or mine extensions should be approved.

Lachlan Craig, another of the students, said: “Climate change cannot be this generation’s nuclear-free moment if we continue fossil fuel exploration and drilling.”