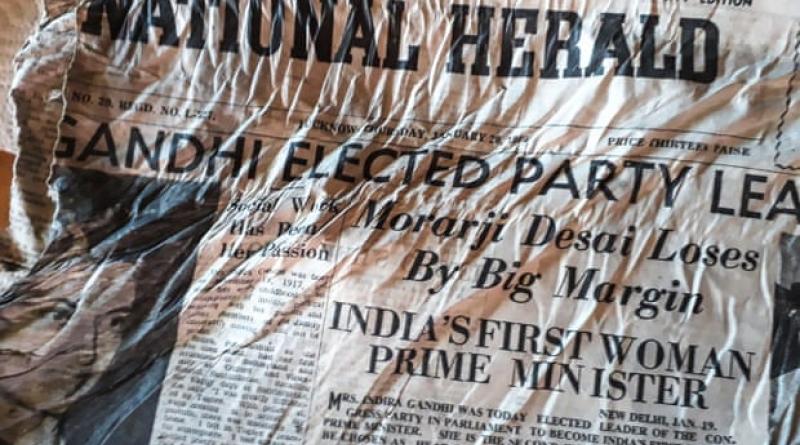 The papers, with headlines from when Indira Gandhi became India’s prime minister, were discovered by Timothée Mottin, who runs a cafe-restaurant, La Cabane du Cerro, at an altitude of 1,350 metres (4,455ft) above the French resort of Chamonix.

Air India flight 101 flew into the Europe’s highest mountain at 8am on 24 January 1966 after a verbal flight control miscommunication, leading to the loss of all 177 passengers and crew, although conspiracy theorists have offered other more lurid explanations.

“They are drying now but they are in very good condition,” Mottin, 33, said of the newspaper. “You can read them.”

“It’s not unusual. Every time we walk on the glacier with friends, we find remains of the crash,” Mottin added in an interview with Le Daupiné Libéré newspaper. “With experience, you know where they are. They are being carried along by the glacier according to their size,” he says.

The cafe is about 45 minutes by foot from the Bossons glacier, where the plane named after the Himalayan peak of Kangchenjunga mysteriously crashed.

Mottin said he was lucky to discover the papers when he did because the ice in which they had been encased for nearly six decades had probably only just melted.

Once the papers have dried out, they will join a growing collection of items from the crash that Mottin has put on display at his cafe.

He said he preferred to share his finds with visitors rather than “hide them in an attic waiting to sell them” – something he said had become a business for less scrupulous climbers.

Since 2012, there have been a number of finds relating to the 1966 Air India crash emerging from the melting ice.

In 2012, a bag of diplomatic mail, stamped “On Indian Government Service, Diplomatic Mail, Ministry of External Affairs”, was recovered, while a year later a French alpinist found a metal box containing the Air India logo containing emeralds, sapphires and rubies worth between €130,000-€246,000 (£117,000-£230,000) .

Human remains found in the area in 2017 are also believed to come from the 1966 crash or that of another Indian plane, the Malabar Princess, that came down in the area in 1950.

Objects from the crash are not the only objects to have been revealed in recent years on the glaciers around Mont Blanc and elsewhere in the Alps.

Since the onset of global warming and glacial recession, the ice fields of the high mountains have become time capsules, returning long-hidden secrets to view including a number of historical artefacts from flight 101.

The remains of missing climbers and hikers – some missing for decades – have turned up with increasing frequency as the Mont Blanc area has lost a quarter of its glacial ice.

In 2017, in neighbouring Switzerland, a Swiss couple who had been missing for 75 years were found in the receding Tsanfleuron glacier. Marcelin and Françine Dumoulin had disappeared after going out to milk their cows in a meadow above Chandolin on 15 August 1942.

In the Italian Alps, melting ice has even revealed bodies of fallen soldiers from the first world war, where Italian and Austro-Hungarian troops died in high-altitude trenches during the so-called “white war”.

AFP contributed to this report