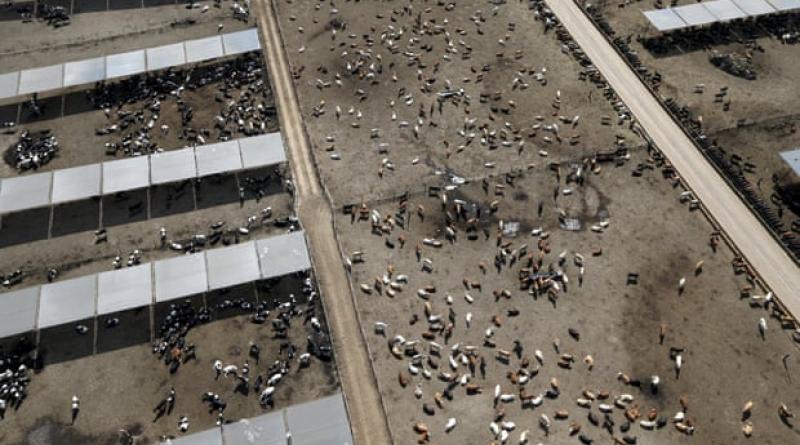 Human activity behind half atmosphere’s load of methane, a gas 28 times more powerful than CO2 at trapping heat.

Animal farming and fossil fuels have driven global emissions of the potent greenhouse gas methane to the highest level on record, putting the world on track for dangerously increased heat levels of 3C to 4C.

Since 2000 discharges of the odourless, colourless gas have risen by more than 50m tonnes a year, equivalent to 350m cars or double the total emissions of Germany or France, according to the latest Methane Budget study by a global team of scientists.

The findings, published in Earth System Science Data and Environmental Research Letters, show that more than half of the methane in the atmosphere now comes from human sources. Of this share, ranching, agriculture and landfills account for about two-thirds, while the fossil fuel industry, composed of oil, gas and coal, makes up the rest.

Methane is second only to carbon dioxide in its contribution to global heating; the gas is released in much smaller quantities but is 28 times more powerful at trapping warmth over a 100-year span.

In 2017, the most recent year for which data is available, the planet’s atmosphere absorbed almost 600m tonnes of methane, up 9% from the early years of the century when concentrations were relatively stable.

Rob Jackson, a professor at the Stanford University School of Earth, Energy & Environmental Sciences, in California, chairs the Global Carbon Project and led one of the papers. He said human activities since the industrial revolution had increased the amount of methane in the atmosphere by 2.6 times, compared with 1.7 times for carbon dioxide.

As methane is more potent then CO2 and shorter-lived in its climate effects, it should be a focus of efforts to cut emissions, said Jackson.

“CO2 is still the beast to slay but warming from methane is the next most important. Acting aggressively on methane can buy us time to address CO2 and shave half a degree off the peak temperature,” he said. “I am optimistic about opportunities to find methane super-emitters, using drones and satellites. But it is harder to cut emissions from a billion burping cows and a billion sheep, where dietary choices and manure management matter.”

The change is markedly different by sector and location. Agricultural methane emissions rose nearly 11% in the study period, while those from fossil fuels rose 15%.

Regionally, the biggest increases – of 10m to 15m tonnes a year – were in Asia, Africa and Oceania, largely due to farming. In the US most of the 4.5m-tonne rise over the past decade has been attributed to fracking and others forms of oil and gas drilling, piping and consumption.

Europe was the only continent to register a decline thanks to strong measures to reduce emissions from manure and industry. The Arctic also saw little change, suggesting fears of methane being released from melting permafrost had not been realised up to 2017.

The authors said there could not be a worldwide stabilisation in methane emissions unless governments took rapid action.

Marielle Saunois, of the Université de Versailles Saint-Quentin-en-Yvelines, in France, who was lead author of the paper in Earth System Science Data, said solutions existed that did not necessarily require reduction in consumption. “Policies and better management have reduced emissions from landfills, manure and other sources here in Europe. People are also eating less beef and more poultry and fish,” she said.

The coronavirus lockdowns are thought to have had less of an impact on methane emissions than on CO2 and nitrogen dioxide because agriculture has not been as affected by the measures as transport and industry.

'Terrifying' New Climate Models Warn of 6-7°C of Warming by 2100 If Emissions Not Slashed.