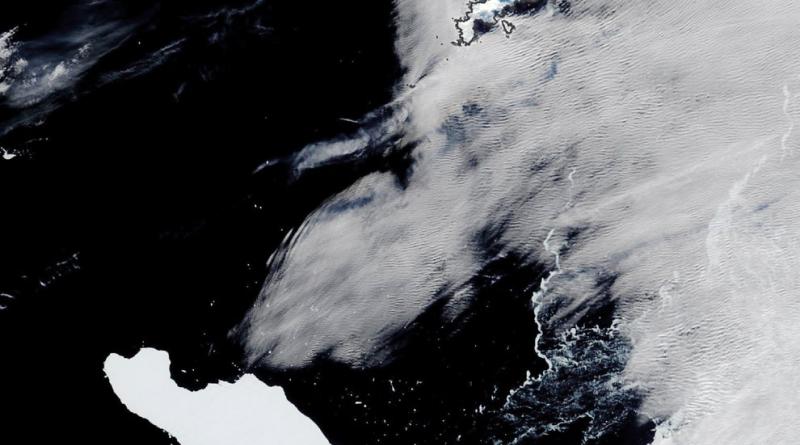 Antarctica’s Larsen C Ice Shelf experienced its highest rate of melting since records began 40 years ago from 2019-2020, a new study has found.

The unprecedented melt at Larsen C, which is Antarctica’s fourth-largest ice shelf, coincided with record-breaking summer temperatures at a weather station in the Antarctic Peninsula, the research says.

The melting was primarily driven by a series of rare weather events that brought additional heat towards the ice shelf, causing it to melt from above, the study says.

The effects of such meteorological events can combine with human-caused global heating to create a “perfect storm” for Antarctica’s ice shelves, a climate scientist told The Independent.

For the research, the authors studied 40 years of satellite data able to detect the presence of water on top of snow, which is an indicator of melting.

The research comes as an iceberg the “size of Norfolk”, which broke free from the Larsen C ice shelf in mid-2017, edges closer towards the British overseas territory of South Georgia in the Atlantic Ocean.

When ice shelves undergo high levels of melting for many years, large pools of water, known as “meltponds”, can form on the surface of the ice.

These pools weigh down on the ice, increasing the chances of icebergs breaking off, explains Dr Suzanne Bevan, a research officer at Swansea University in Wales and lead author of the new research, which is published in the Cryosphere journal. She told The Independent:

“Repeated years of melt similar to 2019/2020 would cause melt ponds to become widespread across the shelf. This was the scenario that led to the collapse of Larsen B in 2002.

“A collapse of Larsen C, if it occurred...would impact on sub-shelf habitat and shelf ocean circulation. And, as we have seen lately with A68 drifting towards South Georgia, large icebergs heading north can pose a threat to wildlife.”

The results of the study are “unsurprising in the context of climate change”, says Dr Ella Gilbert, a researcher of Antarctica’s ice shelves from the British Antarctic Survey, who was not involved in the research.

“Ongoing climate change-induced temperature rise and more frequent warm air events...suggest that we will be seeing more of this in future,” she told The Independent. “This is a glimpse of things to come.”

However, it is worth noting that the study combines two separate satellite datasets, meaning there is still uncertainty over whether the melting seen at Larsen C from 2019-2020 is truly a new record, says Dr Alison Banwell, an ice shelf scientist from the University of Colorado, Boulder. “They do not use continuous data from 1979 to 2020,” she said.